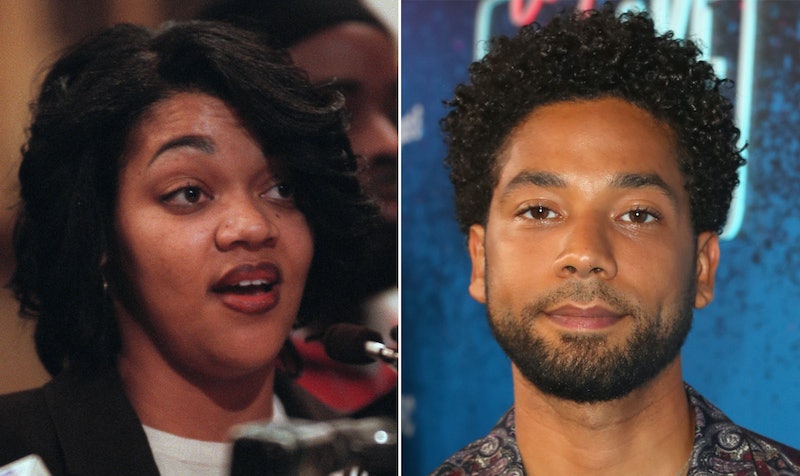 In this op-ed, Jason Nichols, a progressive political and social analyst and lecturer of African American Studies at the University of Maryland College Park, calls out conservative media's comparisons of Jussie Smollett and Tawana Brawley, and explains why the Black community was right to believe their claims.

As the eyes of the nation are on Chicago and the case of Jussie Smollett, the Chicago Police Department now claims the young Empire actor spearheaded a hate crime hoax along with two other acquaintances. When the claims it was a hoax were still coming from anonymous sources, conservative media — who often decry the use of anonymous sources from the White House — wasted no time in jumping on the inconsistencies in Smollett’s story. And in a gleeful rebuke of the actor, the right-wing media has begun to invoke the name of Tawana Brawley.

Tawana Brawley was a 15-year-old girl who, in 1987, claimed a group of white men had kidnapped and raped her, smeared her in feces and left her on the side of the road. A grand jury determined that story was false. Brawley’s name has since become synonymous with what conservatives call "race hustling" and inflaming racial tension. Although her case is nearly 32 years old, she is still a talking point that conservatives use to argue against the credibility of Black victims.

But Brawley’s case is hardly ever put in the correct context. At the time of the alleged incident, Brawley lived in New York, a hotbed of racial animosity. The year before Brawley came forward, white teens had beaten and chased 23-year-old Trinidadian immigrant Michael Griffith in Queens. While trying to escape, Griffith ran into traffic and was fatally struck by a vehicle. A couple years before that, "subway vigilante" Bernhard Goetz shot four Black teenagers who were panhandling, leaving one a paraplegic. Goetz was held up as a hero for striking back at these youth.

There is a long history of violence in America against Black people and Black communities. In 1919, on the very same Chicago streets where Smollett made his now-infamous run for a Subway sandwich, a 17-year-old Black boy named Eugene Williams drowned in Lake Michigan after a group of white men threw stones at him for violating the unspoken segregation rules in the area. A century later, in 2019, Alabama newspaper editor Goodloe Sutton wrote an editorial calling for the Ku Klux Klan to ride through Washington D.C. and "get the hemp ropes out, loop them over a tall limb, and hang them all."

The Black community should bear no shame.

Hate crimes against African Americans and other Black people rose by 16 percent in 2017, according to FBI. Hate crimes against LGBTQ communities rose by 5 percent that same year — 60 percent of those crimes were against Black LGBTQ people, according to a report from the National Coalition of Anti-Violence Programs. There are hundreds of years of historical precedent for racial violence, including the deaths of Laquan McDonald and Rekia Boyd in Chicago, as well as increasing violence against people of color and members of the LGBTQ community. In that context, it was more than reasonable for African Americans to initially lend support to Smollett — just like they did with Brawley three decades before.

If Smollett’s case is indeed a hoax, he would be more aptly compared to Ashley Todd, a woman who claimed in 2008 she was assaulted by a Black man because she was a white Republican and supported John McCain for president. Many racial hoaxes are aimed against Black people. There was Charles Stuart, who claimed a Black man had killed his pregnant wife. Stuart's brother told police it was actually Stuart himself who shot his wife because he was unhappy in his marriage. There was Susan Smith, who set off a massive manhunt after murdering her own children and telling police she had been carjacked by a Black man. There was former University of Maryland student Daniel Murray, who set fire to a house and propositioned a woman to lie and say she saw a Black man commit the crime.

In a study published in The Color of Crime, Katheryn Russell-Brown found that white people falsely claimed Black people had victimized them in 70 percent of racial hoaxes carried out from 1987 to 1996. The right-wing media never raises these cases when discussing racial hoaxes. Instead, they immediately turn to an incident involving a scared and troubled, 15-year-old working class Black girl.

The conservative agenda is clear when pundits use Brawley — and now Smollett — to discredit and cast doubt upon people of color when they claim to be victims of racial violence. They want you to ignore the hate crime statistics, the footage of Trump rallies, and the brutality of the Trump-supporting alt-right in Charlottesville. They want you to think that African Americans and other people of color are liars, scammers, and "race baiters." But the Black community should bear no shame for supporting a 15-year-old girl who alleged a violent rape, nor for believing a queer Black man who alleged a violent attack.