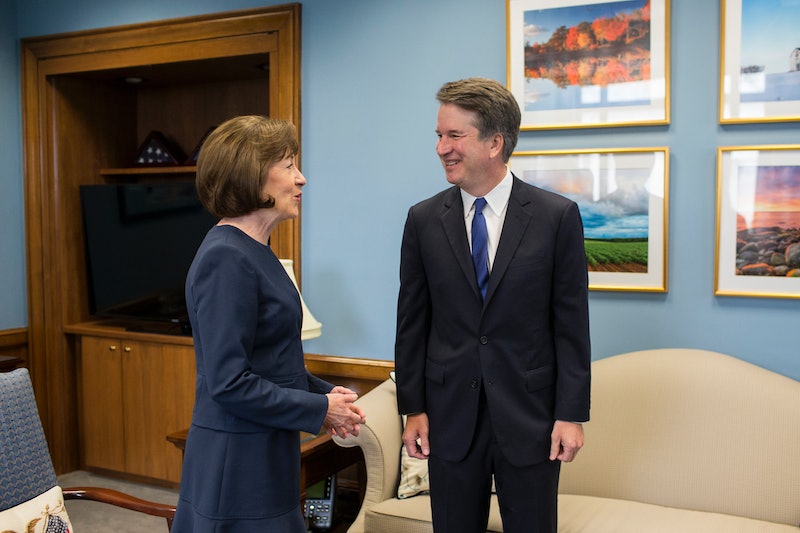 Democrats' chances of blocking President Donald Trump's second Supreme Court nominee may have just dropped. Maine Senator Susan Collins discussed Roe v. Wade with Brett Kavanaugh in a wide-ranging, two-hour meeting on Tuesday, Aug. 21, and she appears to have come out more persuaded that he will not vote to overturn the 45-year-old abortion rights decision. Many onlookers, however, are not so convinced.

Both Collins and Alaska Senator Lisa Murkowski support abortion rights, so they are thought to be the most likely votes to tip the chamber in favor of rejecting Kavanaugh (which will happen if all Democrats vote "no" and two Republicans break ranks). Collins said she discussed Roe v. Wade in her meeting with Kavanaugh and that he "said that he agreed with what Justice Roberts said at his nomination hearing in which he said that it was settled law."

She was referring to Supreme Court Chief Justice John Roberts' statement that Roe was "settled as a precedent" at his 2005 confirmation hearing. But since then, the justice hasn't always defended a woman's right to choose: In 2016, he dissented when the Supreme Court overturned a law that restricted abortion access in Texas. Senate Minority Leader Chuck Schumer noted on Tuesday that a nod to "settled" cases doesn’t necessarily indicate how a judge will vote.

The meeting seems to have tilted Collins further in favor of voting to confirm Kavanaugh. The New York Times wrote that her vote "appears to be leaning toward 'yes,'" and Politico wrote that the senator's "warmth brightens Kavanaugh's prospects." However, Collins says that she hasn't made up her mind yet. "I have always waited until after the judiciary committee hearings before rendering a final decision on a Supreme Court nominee," she told reporters on Tuesday.

It's not just Kavanaugh's "settled law" assurances that concern abortion rights advocates. For them, another red flag is his vote last year to prevent a 17-year-old immigrant in federal custody from terminating her pregnancy. Collins also addressed this when she spoke to reporters on Tuesday.

"I talked to him at length about his decision in the Garza case, which is the only case dealing with abortion in which he has rendered a decision," she said. She was apparently satisfied, and summed up their discussion of abortion rights like this: "We had a very good thorough discussion about that issue and many others."

Trump said during his 2016 campaign that he intended to nominate justices who would overturn Roe v. Wade. And even though Collins is nominally pro-abortion access, she and Murkowski have voted to confirm many of the president's openly anti-abortion nominees to lower courts.

Democrats don't have great prospects for blocking Kavanaugh. But the fight isn't over yet; his confirmation hearings begin on Sept. 4. If you're one of those who doesn't want him on the court, find out how to advocate for rejecting him here.