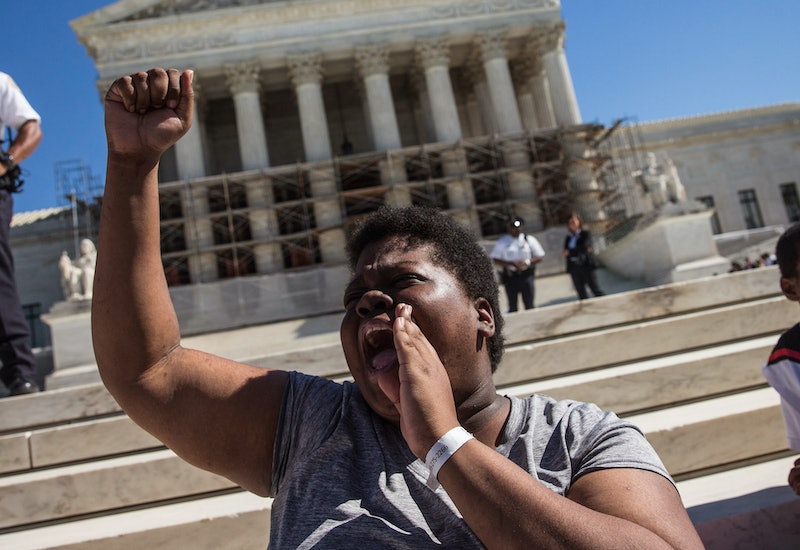 Anthony Kennedy's retirement announcement on Wednesday sent waves of anxiety across the country. If you're one of those (mostly liberal) people freaking out because President Trump will likely replace Kennedy with a hardline conservative justice, you probably want to know what to do about Trump's Supreme Court nomination. It's true that the prospects for blocking it entirely aren't great — but it's also true that it's not completely out of the question, so if you want, it's crucial to try.

Supreme Court justices must be confirmed by the Senate, so it won't come as much of a surprise that most of the action items involve reaching out to your senators. There are a number of ways to do that. If you're ready to jump on the phone, try the U.S. Capitol Switchboard at (202) 224-3121, where an operator will connect you to your senator's office. You can also look up senators' numbers yourself.

Another good option is using Resistbot to contact your representatives quickly and easily, with just your thumbs. Text the word "RESIST" to 50409, where the bot will find your senator and help you craft a message for them, all over text. If you want to go old-fashioned, you could also send snail mail: Find more information on the U.S. Senate website here.

If You Have A Conservative Senator: Pressure Them To Vote No

It's highly likely that your conservative senator will vote to confirm a right-leaning nominee. But it's still worth putting pressure on them to vote no — especially if Trump picks someone radical and your representative tends to lean more toward the center.

Republican Sens. Susan Collins and Lisa Murkowski (from Maine and Alaska, respectively) broke party ranks to help save the Affordable Care Act last July. Since the next Supreme Court justice could help get rid of Roe v. Wade, the case that legalized abortion, it's at least conceivable that some female GOP members could vote against a nominee who's likely to repeal it. Both Collins and Murkowski say that they're pro-choice, though they've also voted to confirm past Trump judicial nominees who are anti-abortion.

If You Have A Liberal Senator: Advocate For Withholding Confirmation Until After Midterms

According to Talking Points Memo, 14 Democrats have so far put out statements saying that no Supreme Court justice should be confirmed until after the midterm elections. They're arguing that Congress should follow the example that McConnell set when he led the successful fight to deny Merrick Garland his seat in 2016.

Of course, that's imperfect logic: McConnell's specific argument (dismissed by many Democrats at the time) was grounded in the fact that it was a presidential election year, not a midterm election year. But the underlying rationale — that the Senate should encompass the most up-to-date representation of who the country wants when it's making such an important decision — still works, and Democrats should use any argument they can to put off the confirmation process.

If You Have A Centrist-Left Senator: Bring Up Their Base

These senators need to know that you, like many in the Democratic base, would be angry if they vote for an extremely conservative nominee. Pointing to the surge of left-wing energy and activism over the past couple of years, many commentators have been arguing that Democratic representatives won't be able to fire up their constituents unless they fight hard to block this Supreme Court confirmation process. MSNBC's Chris Matthews argued as much on Wednesday, saying that Democratic leaders will otherwise "have hell to pay."

"I don't think the Democrats should allow even meetings to occur with Trump’s nominee to fill this vacancy by Justice Kennedy," he said. "There's no way politically the Democratic base will stand for any kind of hearings or vote on a Trump nominee for the Supreme Court before the election."

Above All: Help Retake Congress

While hope isn't completely lost for liberals, it's also true that there isn't much they can do to prevent Trump from confirming another justice. So one of the best forms of action at this point is preventative: If Democrats don't take back Congress this year, Trump could conceivably appoint more conservative judges before he leaves office. Ruth Bader Ginsburg is 85 years old — two years older than the average age at which people leave the bench — and Stephen G. Breyer is getting there, too, as he's about to turn 80.

Assuming that Democrats hang on to every congressional district they currently hold during the midterms, which is far from certain, they need to flip 24 seats to win the House and two seats to take the Senate. If you already have a candidate who inspires you, do whatever you can to support them, from donating to volunteering for their campaign. But if not, visit Swing Left to find the nearest House candidate in a swing district, check out The Road to 2018 to find a senator who's defending a seat, or pick one of the many new candidates going for a flippable Senate seat.

Kennedy's retirement is a reminder that Republicans currently control all major levers of power in the United States. If Democrats want the ability to help shape the court in coming years, they need to step up their midterm election game to make sure it happens.