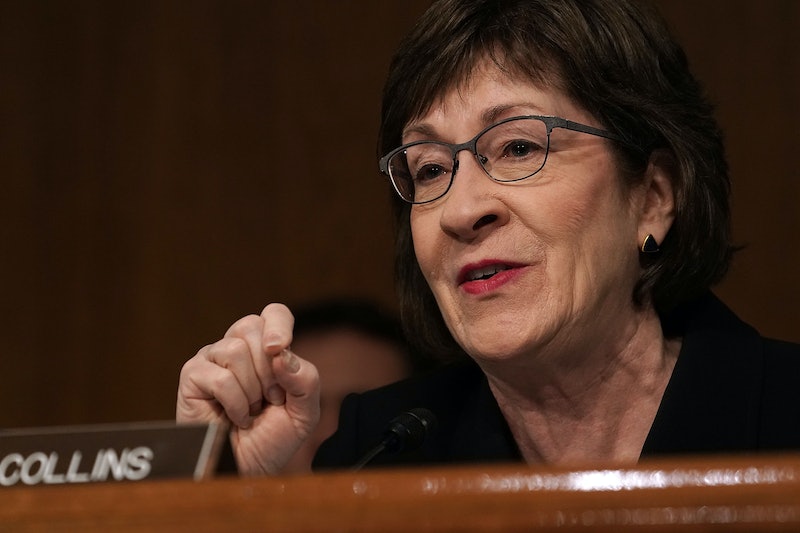 When Supreme Court Justice Anthony Kennedy announced that he was retiring, one of the reigning fears for many people across the country was that President Trump would nominate a replacement who would be likely to help overturn Roe v. Wade, the case that guarantees a woman's right to abortion. Now, however Republican Sen. Susan Collins could help save legal abortion if she stands by her recent pledge not to "support a nominee who demonstrated hostility to Roe v. Wade."

In an interview with CNN's Jake Tapper on State of the Union, Collins said that she was taking an active role in the president's selection process — and that she would not back a nominee who could threaten that particular precedent.

"I would not support a nominee who demonstrated hostility to Roe v. Wade because that would mean to me that their judicial philosophy did not include a respect for established decisions, established law," Collins told Tapper.

According to the Washington Post, Collins and her pro-choice Republican colleague in the Senate, Alaska Sen. Lisa Murkowski, are receiving a lot of focus over the next Supreme Court nomination. Both of their votes will likely be necessary to approve the nomination, but they both support a woman's right to choose.

On Wednesday, the New York Times reported that Trump said that his Supreme Court Nominee would come from a list that he compiled during the 2016 presidential campaign. According to CBS News, the conservative Heritage Foundation played an outsized role in putting together this list. During the campaign, Trump repeatedly claimed that he would only appoint judges likely to overturn Roe v. Wade.

Vice President Mike Pence also made a similar claim on the campaign trail, saying that “if we appoint strict constructionists to the Supreme Court as Donald Trump intends to do, I believe we’ll see Roe vs. Wade consigned to the ash heap of history.”

Collins, however, told CNN that she had lobbied for Trump to look for justices outside of his previously existing list, which she saw as too conservative.

"The President really was soliciting my views on the type of nominee that I was looking for," Collins told CNN's Tapper. "I emphasized that I wanted a nominee who would respect precedent, a fundamental tenet of our judicial system."

Collins, however, also told Tapper that she did not believe that Justice Neil Gorsuch, Trump's first successful nominee to the court, would be hostile to Roe v. Wade, citing his dedication to precedent. During his confirmation process, liberals and Democrats questioned Gorsuch's stance towards Roe, with many assuming that he would not respect it as precedent, as The Hill reported. Gorsuch has not yet ruled on abortion rights, and in fact Mother Jones reported that those most concerned with overturning Roe on the right were not entirely pleased with his inclusion on Trump's shortlist, as he didn't have a record of anti-abortion rulings.

Gorsuch was on Trump's Heritage Foundation-influenced list, though, so many disagree with Collins' suggestion that Gorsuch would protect a woman's right to choose. Her statement today on State of the Union thus rings hollow to many, who believe that her standards in terms of selecting a justice to protect reproductive rights will not be exacting enough. Any Republican senator willing to go against a nominee of Trump's on the basis of reproductive rights, though, would have a lot of power in her hands — so perhaps Collins' statement is an indication that, if necessary, she would be willing to exercise that power.