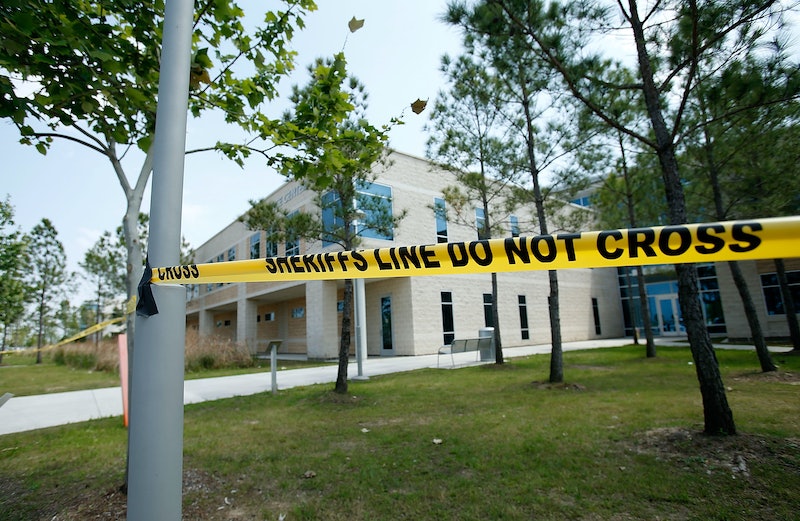 Police in Houston made an arrest on Saturday linked to the shooting death of a 7-year-old girl last week that drew widespread outrage in the area and on social media for being allegedly racially motivated. Harris County Sheriff's Office arrested Eric Black Jr. in connection with Jazmine Barnes' death. She was killed in a drive-by-shooting on Dec. 30. A second man is also in custody.

The Harris County Sheriff's Office said in a statement that Black, 20, was charged with capital murder and admitted to "taking part in the shooting." Bustle reached out to the sheriff's office to contact Black or his legal representatives for comment.

The arrest would seem to be a twist in the case. Police originally said that a white man in a red pickup pulled up alongside Barnes and her family and opened fire. Black Jr. is black, and was arrested following a tip.

Black Lives Matters and other racial justice activists had brought attention to the case online and at local protests, after Barnes' mother said she thought the shooting might have been racially motivated. Activist Shaun King and a lawyer for the family, Lee Merritt, pledged $100,000 for information about the suspect's whereabouts.

Police say that their investigation is not over. "Investigators are continuing to pursue evidence that could possibly lead to other suspects being charged in this case," Harris County Sheriff's Office said in a statement. Officials say, though, that they do not believe Barnes or her family were the intended target of the attack.

Harris County Sheriff Ed Gonzalez, in a statement, thanked tipsters for their role in the shooting. "I am grateful to our dedicated investigators, the partner law enforcement agencies that provided vital assistance, and tipsters from across the nation who pulled together to support our work to get justice for Jazmine," Gonzalez said. "Our work is not finished, but I believe the people of Harris County can take comfort in knowing we have made great progress."

Both King and Merritt, the two who pledged $100,000 for information, have written on social media about the updates to the case. King wrote on Twitter that it "took us from Thursday to Sunday to truly understand this case." He explained the initial description of the suspect as a white man by saying that it was a bystander fleeing the scene.

Merritt uploaded a photo of the second man in custody, who has not been charged yet, and the original police sketch. They don't look anything alike. Merritt wrote that the second man "doesn’t fit the description offered by the 4 different witness statements or composite sketch" on Instagram. "Accordingly, this tip was difficult to believe," Merritt continued. "Assuming the confession elicited is reliable — it is possible the previously identified suspect seen fleeing by several independent witnesses was a bystanader [sic] attempting to escape the shooting."

The authorities worked around the clock to find the individual who is allegedly responsible for the heinous and unspeakable act of violence against an innocent child. This should serve as a warning to all violent offenders who prey on our community: The color of your skin, how much money you make - these things don't matter when law enforcement will find you, eventually.

Barnes' funeral will be held on Tuesday, with a balloon release before the ceremony.