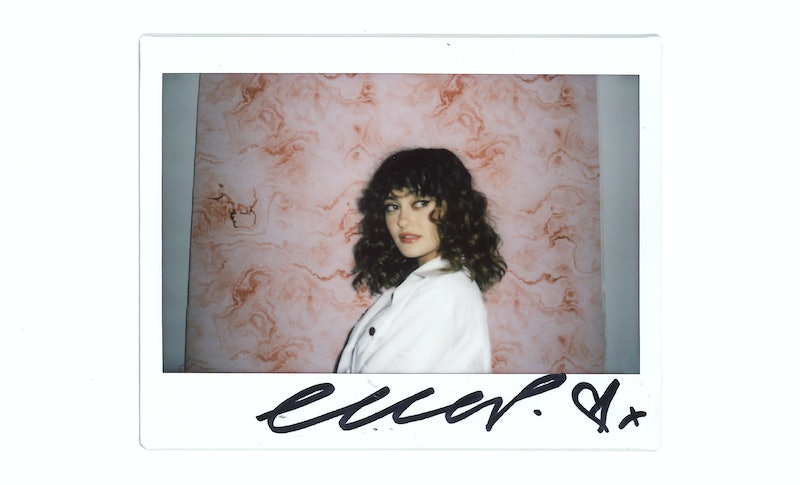 When celebrities hang out with Bustle writers, we want to give them the chance to leave their mark. Literally. So we hand them a pen, a piece of paper, a few questions, and ask them to get creative. The rest is up to them. This time, Sweetbitter star Ella Purnell is leaving her mark in the Bustle Booth.

"I no longer just eat because I'm hungry," says Ella Purnell. "I eat as an experience." Playing the server Tess on Sweetbitter has "100 percent flipped" her relationship with food and dining out. Like her character, she's taking it in and applying it to her life outside of work. "I know how to pair wines, kind of! You drink to experience the flavors, the aromas, the complexities, the layers that go behind a fine. I appreciate that culture now."

"I used to watch people swirling their wine and be like, idiots, they don't know what they're talking about," Purnell laughs. "Now I'm that guy that's like 'hmmm, olives on the nose!'" It's an art form, she says, after all. "It sounds really pretentious, but it's kind of true."

Purnell has played Tess for two seasons now — but for the majority of Season 1, we didn't know her name. As in Stephanie Danler's book that the show is based on, Tess is introduced as a blank slate and referred to only by nicknames like "little one" and "baby monster" as she settles into New York City and starts to figure out who she is.

She's not a blank slate anymore. "Season 2 is my preferred season actually, don't tell anyone, because it's all about power," Purnell laughs. "[Tess] goes from being curious and wanting to experience everything and learn things and find out who she is to becoming voracious and achieving her power." "Life happened to Tess" in Season 1, Purnell says. "But in Season 2, Tess happens to life."

For juicer hints about Sweetbitter Season 2 and Purnell's Disney channel favorites (not everything's the high brow art of fine dining), check out HER answers to our Bustle Booth below.