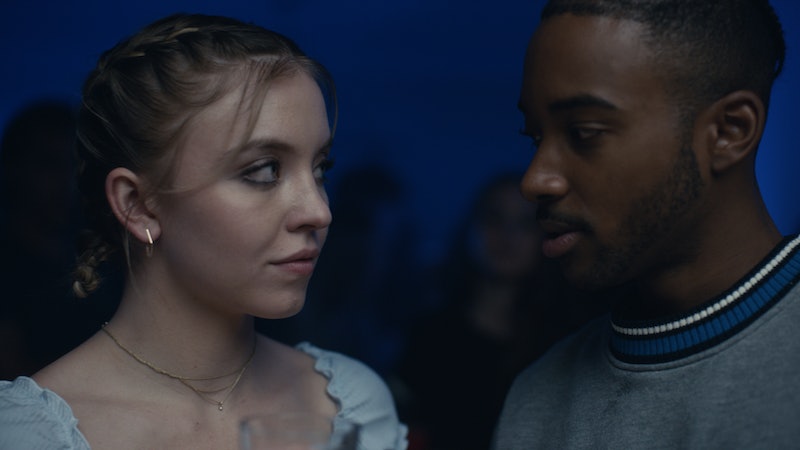 HBO's Euphoria isn't just a show about self-discovery, but talent discovery, too: it features a young cast filled with fresh and recognizable faces. For example Sydney Sweeney, who plays Cassie on Euphoria. She's still getting her footing in the acting world, but chances are good that you've seen her somewhere before.

Sweeney's Euphoria character is the older sister of Lexi (Maude Apatow), who is the childhood friend of protagonist Rue Bennett, played by Zendaya of The Greatest Showman and Spider-Man: Homecoming fame. At 21 years old, Sweeney is still making a name for herself in Hollywood — although it wouldn't be exactly correct to say she's just getting started. In fact, her credits go back 10 years already, to when she made her first onscreen appearance as "Little Girl" in an episode of NBC's Heroes.

In the decade since that debut role, Sweeney has gone on to guest star in a number of popular shows, including Criminal Minds, 90210, and The Middle. Her steady work eventually paved the way for an absolutely meteoric year in 2018, as Sweeney appeared in three high-profile projects. Now, one year later, she's starring in a major HBO drama. Here are five of the roles that led Sweeney to this "euphoric" point in her career:

How different was Grey's Anatomy just five years ago? Well, McDreamy was still alive and April and Jackson were still a thing, for starters. In 2014, Sweeney appeared in one episode of the ABC medical soap as the daughter of a tragically ill-fated patient (aka the show's favorite kind of patient). What the patient thought was heartburn turned out to be cancer — but despite her astute diagnosis, Bailey was unable to save his life, leaving Sweeney's Erin teary and heartbroken.

A few years after her appearance on Grey's Anatomy, Sweeney guest starred in the final episode of Pretty Little Liars. The series finale introduced her as Willa, a member of the clique ruled by queen bee Addison. But when Addison went missing in the episode's final moments — and Willa fretted "I've looked everywhere for her, I think I heard her scream" — the show came full circle, with Addison's disappearance mirroring Alison's disappearance in the pilot.

Sweeney's terrific 2018 started off with the release of this Netflix original series. Telling the story of the nerds and misfits of a high school in Boring, Oregon, she played junior drama club member Emaline. The show may have only lasted one season, but watching Sweeney portray Emaline's journey of self-discovery, as she fell in love with Peyton Kennedy's Kate, was enough to prove her chops.

Just a couple months after the release of Everything Sucks!, Sweeney made her debut on Season 2 of Hulu's The Handmaid's Tale. She had a memorable arc on the show's sophomore season as Eden, the young bride of June's lover Nick. Eden's pious devotion to Gilead wasn't enough to save her when she fell in love with a Guardian named Isaac. After attempting to escape the dystopian nation, Eden and Isaac decided to die together and be executed publicly by drowning, rather than renounce their "sin."

On the heels of her tragic arc on Handmaid's, Sweeney played an equally tragic character on the acclaimed HBO series Sharp Objects. There, she portrayed Alice, the roommate of Amy Adams' Camille at a psychiatric facility. Although they became friends for a time, Camille was devastated when Alice ultimately killed herself by drinking a bottle of bleach.

On the big screen, Sweeney recently appeared in a small role in this year's neo-noir mystery Under The Silver Lake, starring Andrew Garfield. Later this summer, you'll be able to see her in Quentin Tarantino's hotly anticipated Once Upon A Time In Hollywood. And of course, soon you'll get to know her as Euphoria's Cassie. Sweeney may still be making a name for herself, but it's clear from her work in recent years that she's one to keep your eye on.

More like this
The 24 Best K-Dramas To Stream On Netflix Right Now
By Alyssa Lapid
Who Could Die In The Stranger Things Season 4 Finale?
By Kadin Burnett
Julie Andrews Revealed A Surprising Behind-The-Scenes 'Bridgerton' Detail
By Grace Wehniainen
Everything To Know About Obi-Wan Kenobi Season 2
By Kadin Burnett
Get Even More From Bustle — Sign Up For The Newsletter