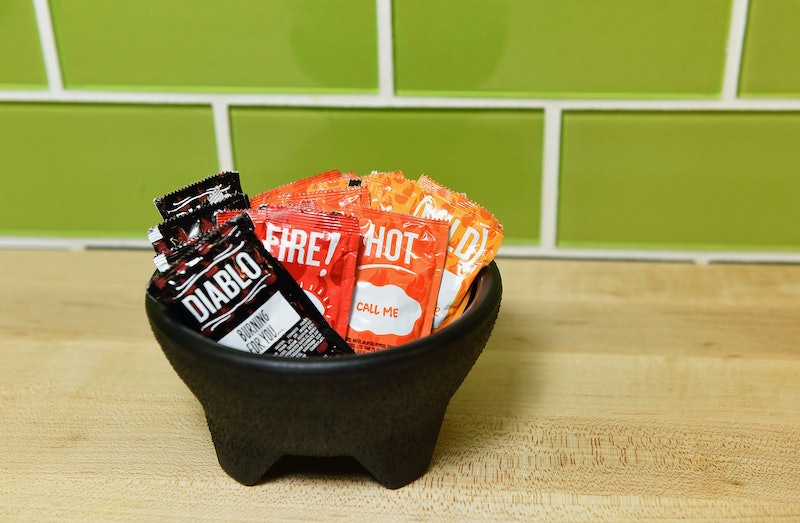 The idea of being trapped in a car for five days is scary enough on its own, but one person did just that and survived thanks in part to a surprising source. A Oregon man named Jeremy Taylor survived on Taco Bell hot sauce packets while trapped in his car for five days during a blizzard. Naturally, Taco Bell heard about this and is now paying it forward by giving him a bunch of food. I mean, his story does paint Taco Bell sauce packets in a very good light. It's the least they could do.

As reported by Delish, on February 27, the Deschutes County Sheriff's Office posted on Facebook that Taylor was missing. He had last been seen getting gas, and the report explained that "He is known to frequent the forested area to the west of Sunriver where he enjoyed off-roading."

On March 1, Taylor, along with his dog, Ally, were found by a snowmobiler. DCSO explained in a new post, "Jeremy and Ally were found to be in good condition, but hungry after being stuck in the snow for five days." According to the report, Taylor got stuck in the snow on a Sunday and had to spend the night in his car. But, when he awoke the next day, there was even more snow. He and Ally attempted to leave the car and walk, but it wasn't possible. So, they stayed in the car for five days until they were found.

According to DSCO, "Jeremy stayed warm over the next four days by periodically starting his vehicle and used a few taco sauce packets he had as food."

The reason we know this was specifically Taco Bell sauce is because Taylor shared a couple updates via Facebook himself. As reported by Delish, Taylor wrote, "Thank you everyone, I'm safe my Ally dog is safe. I really appreciate all the help. Got lucky, lets never do that again. I'll be in touch with everyone soon." He also commented in response to someone else, "Taco Bell fire sauce saves lives."

In an interview with KATU 2 Oregon, Taylor explained of the three packets, "I was obviously hungry. I didn't feel like I was like starving, but it was... I mean when you have nothing, it's nice. You know, even hot sauce is gonna be something." He added, "There’s onions or jalapeños or something in there. There's something that you can chew on for a quick second. Whether or not it's any nutritional value or not, at least in your mind it's something."

Now, Taco Bell has given Taylor a year's worth of food. "We’re very glad Jeremy and Ally are okay," Taco Bell told The Oregonian in a statement. "We know our sauce packets are amazing, but this takes it to a whole new level. We’re in touch with Jeremy and have sent him a well-deserved care package, a year’s supply of Taco Bell, and of course, all the sauce packets that come with it."

Just a wild guess, but Taylor might need a little time before setting an eye on a Taco Bell sauce packet again. As for Ally, hopefully, she's getting all the food she could ever want, too.