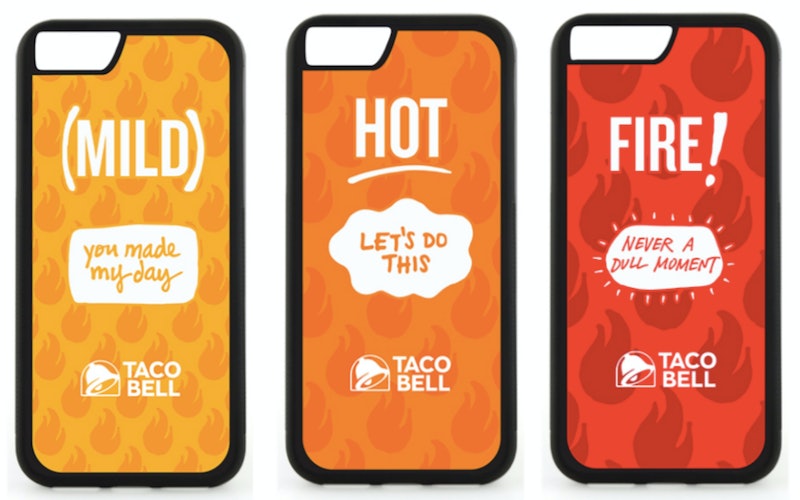 Taco Bell isn't just a fast food chain, it's a lifestyle. Don't believe me? Listen to a Taco Bell devotee talk about the restaurant. Mountain Dew Baja Blast basically flows through their veins. Their hands are perpetually covered in Doritos Locos orange cheese dust, and the brand's signature hot sauce is like perfume. Now, just about anybody can show off their love of Taco Bell thanks to the brand's chicest endeavor: accessories. Yes, a taco can double as an accessory. But, if you want one that is a little less messy, check out the Taco Bell phone cases that look like hot sauce packets.

When you think of Taco Bell, there is no way phone cases even register as a blip in your mind. It's basically unheard of for a fast-food chain to branch out far enough that it begins to sell things that aren't edible. But, perhaps it makes sense that Taco Bell is among of the brave few to make such a monumental move — the Tex-Mex chain has always taken a special interest in the unexpected, and this is definitely right on par with the kinds of things it has added into the cultural zeitgeist.

If you're still having trouble wrapping your brain around these beauties, know that they not only exist, but they come in three different styles. The "Mild" case is a bright yellow-orange, covered with a subtle pattern of flames. Under the word "(MILD)" in a narrow white font, the words "you made my day" are written in translucent cursive inside a white box.

The second in the series is a shade of undeniable Taco Bell-branded orange. Under the word "HOT" written in all caps, the phrase "Let's do this" is appears inside a white box. Who knew you could get a pep talk from the back of your phone? It's much better than a pop socket.The last of the three cases is bright red. Below the full caps "FIRE!" label, the phrase "NEVER A DULL MOMENT" is written in a dashed penmanship and surrounded by a white bubble.

All of the phone cases are created to fit an iPhone 7 Plus and an iPhone 8 Plus. And it would appear Taco Bell Hot! Sauce is finally getting a well-deserved moment in the accessories spotlight. Not only can you get phone cases modeled after the condiment, there is a slew of other products available on the website that bear a likeness to the packets that might currently be living in your car's glove compartment.

A set of pint glasses that has a strikingly similar design to the phone cases is available. The three glasses are modeled after a Mild, Hot, and Fire sauce packet, respectively. Plus, since the glasses are, well, glass, and you can use a dry erase marker to customize the little white boxes on each of them.

Anyway, if you buy one of these phone cases, you'll officially be able to say you always carry hot sauce in your bags — and as we all know, Taco Bell hot sauce saves lives.