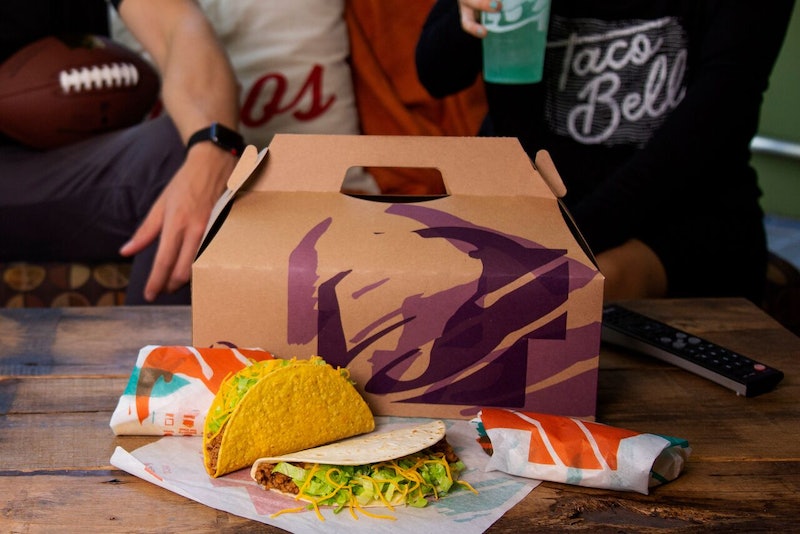 While you may have your own Taco Bell order so well memorized that it's practically tattooed to the inside of your eyelids, when it comes to distributing tacos en masse, things can get a little hectic. Rather than individually ordering a bunch of tacos for your friends and then holding a years-long grudge against someone who recklessly ate the one you ordered with extra cheese (BENJAMIN), the universe now offers as a solution to keep the peace: Taco Bell is launching Party Packs nationwide, starting on Oct. 18.

The Party Packs come in three different varieties, to suit whatever ~mood~ your gathering is — whether it's game night, a movie night in, or you're forcing your grown adult friends to assemble and tell ghost stories in your tiny studio apartment with no chairs (not sorry!!). The first is a Taco Party Pack, which comes with a mix of 12 crunchy or soft tacos; the second is a Taco Variety Pack, which comes with a mix of six crunchy or soft tacos and six Nacho Cheese Doritos Locos Tacos; and the third is the Grande Meals, which comes with ten of "your choice bean burritos, soft tacos and crunchy tacos," according to Taco Bell.

I mean, yes, you could ostensibly just take this all to the face yourself. But that, as always, is business between you and Taco Bell.

To sweeten up the deal, customers in participating markets will be able to order the Party Packs for delivery via Grubhub; they're also available on Taco Bell's website, and on the mobile app for 15 percent off through the month of October.

But say you are not within the delivery window of a Taco Bell, or within walking distance of one. Yes, you could drive there, or take the bus — but it also has come to my attention while perusing Taco Bell's website that you have the power to make your journey as extra as the heat in Taco Bell's sauces, by rolling up in a literal, actual Taco Bell branded bike.

Taco Bell says there are only 25 of these in existence, and they cost $450 a pop, so odds are they've sold out by now — but if you do manage to have enough money in your bank account (read: have not blown your whole budget on tacos already) and acquire one of these, make sure you install a basket for all the Party Packs you'll be taking home.

And hey, if you're ~dancing on your own~, Taco Bell still has a party pack for you, too. Here's your friendly reminder that Taco Bell currently has a Triple Double Crunchwrap Box that pairs the menu item with two crunchy tacos and a drink, as well as a Chalupa Cravings Box, which comes with a Chalupa Supreme, a Beefy 5-Layer Burrito, a Crunchy Taco, Cinnamon Twists, and a drink. Plus, of course, more combos than your taco-loving heart can fathom. So whether you are eating tacos among friends or tacos are your friends, you've got something delicious to look forward to this week, y'all.