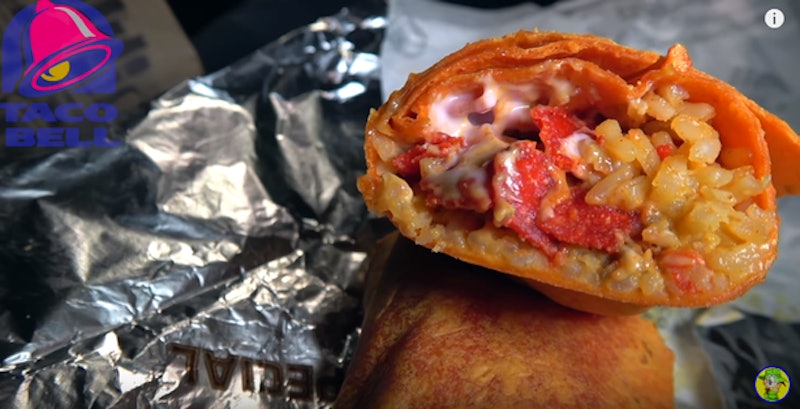 Does '80s and '90s nostalgia know no bounds? That's a rhetorical question, of course. I'm fairly sure that the Internet is actually powered by dreams of millennial childhoods at this point. It was only a matter of time, then, before Taco Bell's "Firecracker" burrito was created. Upon first glance, the new concoction might seem like your typical burrito, but it contains a special ingredient: spicy "popping crystals" that fizz in your mouth. Please hold your flavor-explosion jokes until the end of the article.

According to Foodbeast, the Firecracker burrito was spotted by a Reddit user in the Orange County, California, area. The burrito comes in two varieties: cheesy and spicy. Both come with rice, beans, nacho cheese, beef, and red tortilla strips, but the spicy option adds a chipotle sauce. For 20 cents, you can buy a packet of the aforementioned Cayenne Popping Crystals to sprinkle over the burrito for a fizzy kick. While the new menu item doesn't appear to be an official collaboration between Taco Bell and a certain candy company, I think we can all agree the crystals are basically spicy Pop Rocks.

Fortunately, enterprising food bloggers have tried it out for you. Foodbeast writes that the candies give the burrito a "sweet-spicy flavor" and an interesting texture. Just exercise caution, the writer adds, because they can quickly make the burrito too sweet.

YouTube personality Peep THIS Out tried the Firecracker burrito as well. He also warned against adding too many candies at once, but he called it "very, very cool."

This isn't the first time Pop Rocks (or their off-brand equivalent) have been incorporated into traditional food. The candies can be found in desserts like "firecracker bark" and apple crumble, and they're an easy way to liven up drinks. This year even saw the release of Fireworks Oreos with popping candy in the frosting. Who's to say the fizzy candies don't belong on a burrito?

If you're dying to try the burrito for yourself, you'll need to head west. Foodbeast confirmed that the new item, which is still in the testing phase, can only be found at four California locations until Aug. 16.

By the way, consider this your yearly reminder that the Pop-Rocks-and-carbonation story is definitively an urban legend. That being said, if you get your hands on the burrito, I'd stay away from soda for a little while. You never know.