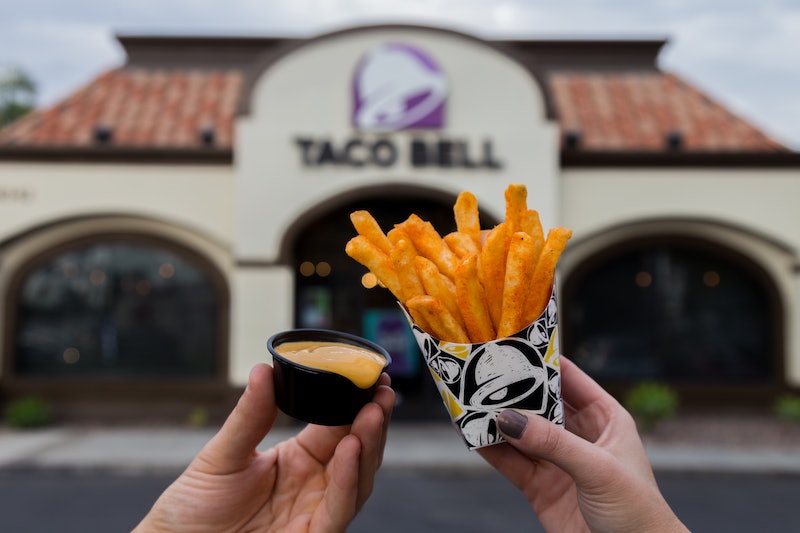 On Jan. 3, your favorite Mexican fast food chain, Taco Bell, confirmed a very juicy rumor: They announced that they would, in fact, debut "the most-anticipated menu item... of the year" later in the month: Nacho Fries. (Cue the national celebration.) Even better? They would come with a wildly affordable $1 price tag. (Cue the rowdier national celebration.) And now, as of Jan. 25, Nacho Fries are finally available at Taco Bell — and, yes, people are kind of freaking out about it already.

Have you recovered from the news? Have you run to your local Taco Bell to pick an order (or three) up? Great. Now, let me give you more info.

Per the Taco Bell Newsroom, the Nacho Fries will be "available crisped to perfection with bold Mexican seasoning and served with a dippable side of warm Nacho Cheese." You can grab an order a la carte for $1, but they're also available for upgrade: The fries will be served Supreme for $2.49 or Bell Grande (and topped with add-ons like beef, Pico de Gallo, and sour cream) for $3.49. While the chain is calling this a "limited release," it's unclear how long the window will be, so I can't help but wonder if/hope that the Bell might secretly be in it for the long haul with Nacho Fries. This is pure speculation, though, so if you're psyched about this new menu item, I wouldn't wait too long to give it a try. Plus, with that price tag, what's stopping you?

Now that Nacho Fries are officially available for purchase, people are obviously taking their excitement to social media.

This tweet gives Taco Bell a lot of credit, but it's also not an exaggeration so it's fine. Nice work, Taco Bell.

As an insomniac myself, I get this. Taco Bell is fighting the good fight with this release, giving the sleep-deprived (and queso lovers) among us a reason to stagger through eight-plus hours of office obligations.

The $1 price point makes Nacho Fries crazy affordable, but it also means that you'll finally have a prime opportunity to offload the random dollar bills gathering dust in your various pockets and drawers.

When your new menu addition is put on equal footing with Tim Riggins himself, you know you've got yourself a winner. Well played, Taco Bell, well played.

Even though we have more leeway with our character count on Twitter these days, there are still limits to a tweet... but a picture is worth a thousand words. And you have two pictures here!

It's more than just the fries themselves that are making people lose their you-know-what. The commercial — which is called Web of Fries, stars Josh Duhamel, and reads extremely similar to the preview for an intense Bourne Identity-style action and government conspiracy movie — has been attracting a lot of attention too.

I, for one, would seriously consider seeing this film if someone decides to run with it... even if it is a spoof. In the meantime, I guess all we can do is snack on some Taco Bell Nacho Fries and hope that this ad makes an appearance at our Superbowl party. (Seriously, though, people are really crazy about this ad.)

Brilliant: an adjective reserved for prodigies, all things British, and now the Nacho Fries commercial. Do not take this one lightly, people.

I'm a firm believer that there are very few moments that can't be marked with a GIF from The Office, and this just proves my point. It also proves that the ad is seriously funny.

There's something for everyone here: fries, taco seasoning, melted cheese, and first-rate marketing. I dare you to find fault with this.