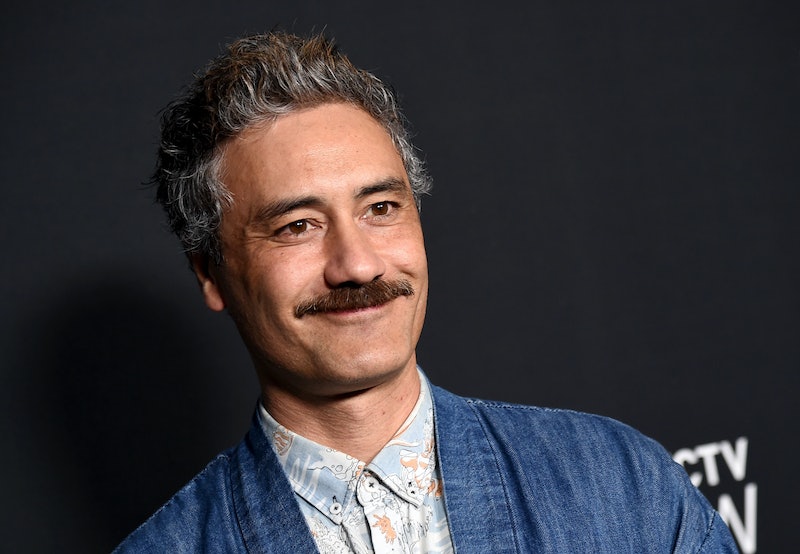 Ever since Disney/Marvel severed times with Guardians of the Galaxy writer and director James Gunn last July, the future of this particular MCU series has remained unclear. And while fans are no closer to learning who will take over as director for the third installment, there is one name we can officially rule out. Taika Waititi will not direct Guardians of the Galaxy Vol. 3. In fact, according to IndieWire, the director didn't even think about stepping into the series out of respect for Gunn.

While attending the Television Critics Association event for his new FX show, What We Do in the Shadows, on Monday, Feb. 4, Waititi addressed the Guardians question. "For me, those are James Gunn’s films," he said. "Going into something like that with his stamp all over his films, would be like going into someone’s house and saying, ‘Hey, I’m your new dad, and this is how we make peanut butter sandwiches now. It feels kind of awkward.'"

Waititi's statement might disappoint some who feel that the Thor: Ragnarok director would make a perfect replacement for Gunn, but it shows how much respect the two MCU directors have for each other. However, even if Waititi views Guardians "James Gunn's films," he and his fellow fans of the first two movies should probably come to terms with the fact that Guardians will — and should — get passed along to another director. The story, after all, deserves to live on with or without Gunn.

And it sounds like Marvel is actively working to hire a new director to helm GOTG 3. Earlier this week at the premiere of Lego Movie 2, star Chris Pratt gave an update on the third Guardians of the Galaxy movie. According to Variety, Pratt said, “I promise there’ll be a third movie, I don’t know exactly what that’s going to look like, but I know everyone on board is just eager to give the fans what they want and wrap up a trilogy in a meaningful way."

If Marvel is, in fact, planning on finishing the Guardians trilogy that Gunn started, odds are they're searching for a new director right now. The Guardians cast, however, may still be holding out for Gunn to return to the series. In an Instagram post responding to Gunn's firing, Pratt wrote, "I’d personally love to see him reinstated as director of Volume 3."

Gunn's firing came after a series of offensive tweets written by the director years ago were uncovered. Those tweets included jokes about pedophilia and rape. Gunn responded on Twitter in a series of tweets on July 20, 2018. "For the record, when I made these shocking jokes, I wasn’t living them out," Gunn wrote. In another tweet in that same thread, the Guardians film creator said, "I used to make a lot of offensive jokes. I don’t anymore. I don’t blame my past self for this, but I like myself more and feel like a more full human being and creator today. Love you to you all."

Even after Marvel and Disney dropped Gunn, the writer/director found a new home with Warner Bros. Pictures and DC Entertainment, as multiple outlets have reported that Gunn will direct the second Suicide Squad movie. On Monday, The Hollywood Reporter's newsletter, "Heat Vision," reported that Gunn was allegedly offered his pick of DC movies to write next, including the next Superman movie.

Considering all of the support that Gunn has received, both from the cast of Guardians of the Galaxy and from contemporaries like Waititi, it seems like there's a powerful presence in Hollywood that's, well, gunning for Gunn to return to finish off the MCU series. But, what comments like these don't acknowledge is that the only person responsible for Gunn not directing GOTG vol. 3 is Gunn.

Moreover, rather than continuing to support a problematic director/writer like Gunn, fans should be pushing Marvel studios to use this opportunity to hire non-white or female directors. After 10 years and 20 films, Captain Marvel will be the MCU's first film with a female director. And a large majority of MCU movies have been directed by white men. Speaking at the Produced By conference in the summer of 2018, as reported by Variety, Marvel Studios President Kevin Feige promised that the next 20 marvel films will include "a heck of a lot" of female directors. Guardians of the Galaxy vol. 3 seems like a pretty good place to start.