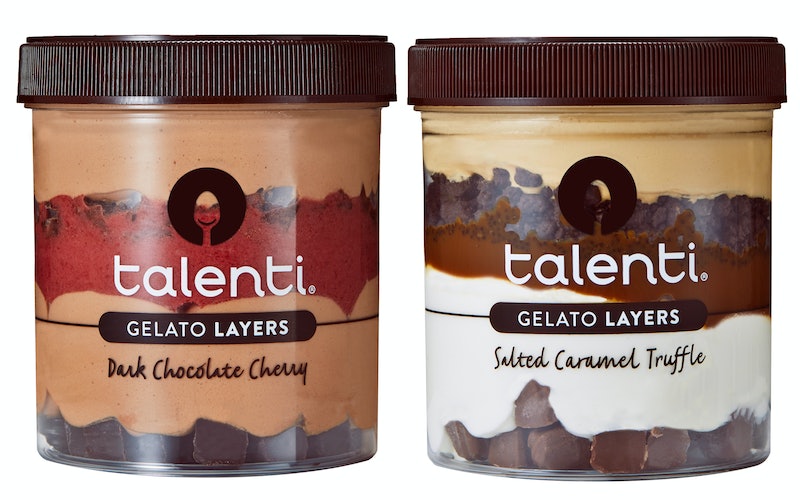 If you've ever been shamed for "contaminating" a pint of ice cream by digging your spoon directly into it and double-dipping, then the solution is clear: make sure it is extremely clear when you are buying a pint that it is meant for solo enjoyment. Nothing will make that statement quite as loudly in a shared freezer than stocking it up with Talenti's new Gelato Layers pints, which are so aggressively stuffed with five layers of sauces, chocolates, and delicious pieces that there is truly no other way to consume it than directly from the pint. I use the word "pint," but I truly mean the word "journey" — because once you read everything that has gone into each flavor, it will truly leave you changed.

The best thing about the lineup is that there's a little something in there for everybody, whether you lean more toward milder, fruitier flavors, or want to go full on chocolate to the face. The new flavors include Vanilla Fudge Cookie, Salted Caramel Truffle, Chocolate Cherry Cheesecake, Black Raspberry Vanilla Parfait, Peanut Butter Vanilla Fudge, Mint Fudge Cookie, and Dark Chocolate Cherry, offering unique take on each of the flavors by pairing them with complementary and sometimes unexpected bits and sauces.

Bustle had the opportunity to try the new flavors before they hit shelves, and form some very strong opinions. Two that left the biggest impression were the Salted Caramel Truffle, which, per Talenti, is comprised of "a layer of Sea Salt Caramel, followed by a layer of chocolatey cookies for a delicious crunch, a third layer of dulce de leche, a fourth layer of our vanilla gelato, and a fifth layer of chocolatey caramel truffles," and the Peanut Butter Vanilla Fudge, which Talenti says is comprised of "[d]ecadent Peanut Butter gelato made with real salted peanut butter, followed by peanut butter cups, fudge sauce, vanilla gelato and peanut butter cookie pieces."

In celebration of these new flavors, Talenti is hosting a "Talenti Spooneasy," a "hidden gelato speakeasy" that will be in New York City on March 20 and 21, so that people can sample all of the flavors in person. You can head to Eventbrite to book yourself a reservation, but I'd move fast — gelato stans are going to book these up faster than you can get to the fifth layer of your pint.

In the meantime, Talenti Gelato Layers are now rolling out in stores nationwide — you can visit Talenti's website to find the pints closest to you.