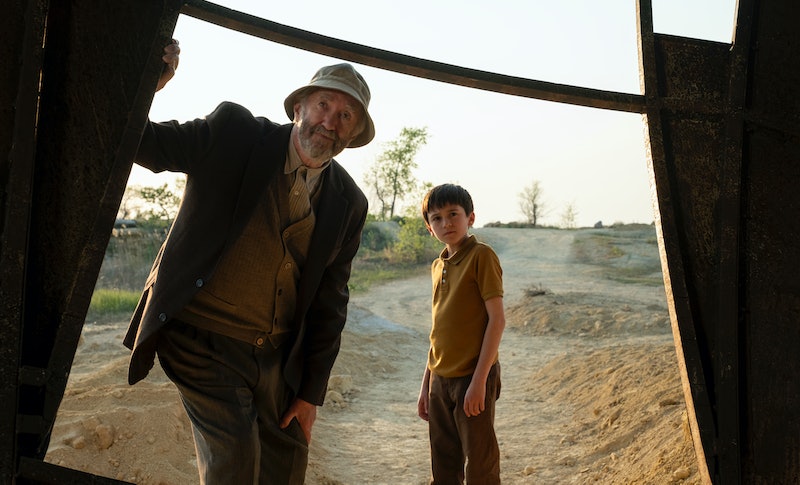 Amazon Video's new sci-fi series, Tales from the Loop, is based on a book of digital paintings by the Swedish artist Simon Stålenhag. His works — which are set in the '80s and '90s — combine to create an alternate version of the Swedish countryside of Mälaröarna, where a large particle accelerator called the Loop was built in the '50s by order from the government. This has allowed for incredible technological advances, but also some strange side effects. In the trailer for the show, a man accidentally clones himself, snow floats upwards instead of down, and a child holds hands with a robot, among other oddities.

The idea was born from Stålenhag's early career as a concept artist for video games and movies. "I learned from my profession how to do robots and monsters and dinosaurs and all of that stuff," he told Slate. "Once my hand knew how to do that, I had to do that, so I was like I have to put a robot in this scene of a rural setting in Sweden, and it kind of worked."

After publishing his paintings on social media, Stålenhag decided to compile them into a book, per CNN. This was the first iteration of Tales from the Loop, which was published in Swedish in 2014 and later translated to English. Stålenhag told Slate that he started working on the concept around 2008, using scenes from his own childhood as a starting point. "I think I'm doing a lot of these artworks for my 12-year-old self, to be honest," he said. "That's the person I'm talking to even though it's very dark sometimes. I want to make those books that a 12-year-old feels like they're not supposed to look in but want to look in anyway."

Stålenhag released a sequel to Tales from the Loop, called Things from the Flood, in 2016. In it, the children of Mälaröarna have become teenagers, and the Loop facility is defunct. Both books have since been turned into RPGs (or, Role-Playing Games, à la Dungeons & Dragons), and are now finding yet another life in Amazon's series. The show was created by Legion co-executive producer Nathaniel Halpern, who told ScreenRant that he was drawn to the "marriage between the ordinary and the extraordinary" in Stålenhag's work.

Stålenhag also served as a consultant for the show, and told Slate he was excited to see actors embody the characters he had created. "I can write characters, and I can write about feelings and I can paint people, but you can't paint close-ups," he said. "Even if you could technically, it's impossible to get acting in a still medium.... In film, with real actors, there's a whole new dimension to it."

More like this
'The Rings Of Power' Episode 5 May See The Realms Brought Together
By Kadin Burnett
Nazanin Boniadi Was A Healer Long Before 'The Rings Of Power'
By Olivia-Anne Cleary
The 'Reasonable Doubt' Cast Includes A 'Save The Last Dance' Reunion
By Grace Wehniainen
Here's What Jeffrey Dahmer's Dad Has Said About His Other Son, David
By Grace Wehniainen
Get Even More From Bustle — Sign Up For The Newsletter