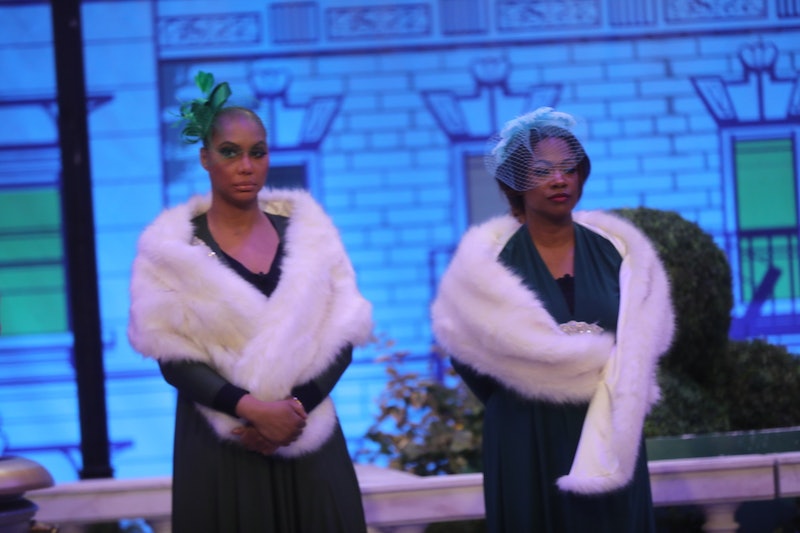 "Expect the unexpected" may be the unofficial mantra of the Big Brother house, but a lesser-known and unspoken reality of the series is that no matter how kind or level-headed someone is in their real life, you can always expect to see them caught up in some drama. Such is the case with Tamar Braxton and Kandi Burruss on Celebrity Big Brother 2. The two may have expected to come in without having to deal with their pre-existing beef, but they quickly found themselves sucked right back into their old history.

As Braxton explained on Celebrity Big Brother, the two know each other because they've always run in the same circles within the music industry, but according to her, they were never really friends. "[Burruss] ain't never really liked me like that," Braxton said on the show, despite the fact that they toured together just over a year ago with Buruss' group Xscape. Braxton insisted that she "never did nothing" to Burruss, but Burruss had a different side to the story. She said that they'd actually managed to become close before, but it was that tour that ultimately put them at odds, as Braxton had invited people who spoke negatively about her in the past.

When Braxton tried to talk to Burruss about their issues on Big Brother, they didn't make much headway. "I feel like you made comments on things that you didn’t know about and shouldn’t have gotten in between of," Braxton said. "You personally interjected yourself in the situation."

Burruss replied that she didn't remember "ever saying anything" about Braxton, while Braxton expressed that she felt "disrespected" and "uncomfortable" by Burruss' actions during the tour. Burruss said she "wasn't trying to attack" Braxton then started laughing, and finally, Burruss stormed out.

So, where did it all go wrong?

2012: They Posed For A Cover Together

Nearly seven years before their Celebrity Big Brother blowout, Braxton and Burruss appeared together on the cover of Vibe reality TV-centric May 2012 issue — Burruss for Real Housewives Of Atlanta and Braxton for Braxton Family Values. The two exchanged compliments during their joint interview, with Burruss telling Braxton that, "There [are] a lot of things about your show that I like," and Braxton saying, "Sometimes when I watch Kandi, I wish I could be more like her."

The two went to the Bahamas in 2016 to celebrate mutual friend Tiny Harris' birthday. Braxton may think Burress "never really liked [her]," but they must have at least been on cordial terms to get through the trip together.

Burruss explained on Big Brother that during the tour's New Year's Show, they were allowed to invite special guests. According to Source, Braxton invited The Queens Court hosts Khia and TS Madison, who Burruss claims had said disparaging things about Xscape. Further, Burruss said that tensions rose when Burruss appeared on The Real, a talk show that Braxton was fired from in 2016.

Whose version of events is true, we may never know, but perhaps this season of Big Brother will help them to reconcile. After all, sometimes it really is better to go with the devil you know than the devil you don't.

More like this
Every ‘RuPaul’s Secret Celebrity Drag Race’ Contestant’s Identity Has Been Revealed
By Brad Witter
Wait, Is Maya Jama Confirmed To Host 'Love Island'?
By Sophie McEvoy
Confusion Reigns After Kanye Changes His Instagram Profile Pic To Kris Jenner
By Jake Viswanath
Kylie Jenner Goes Into Labor & Welcomes Her Baby On 'The Kardashians'
By Jake Viswanath
Get Even More From Bustle — Sign Up For The Newsletter