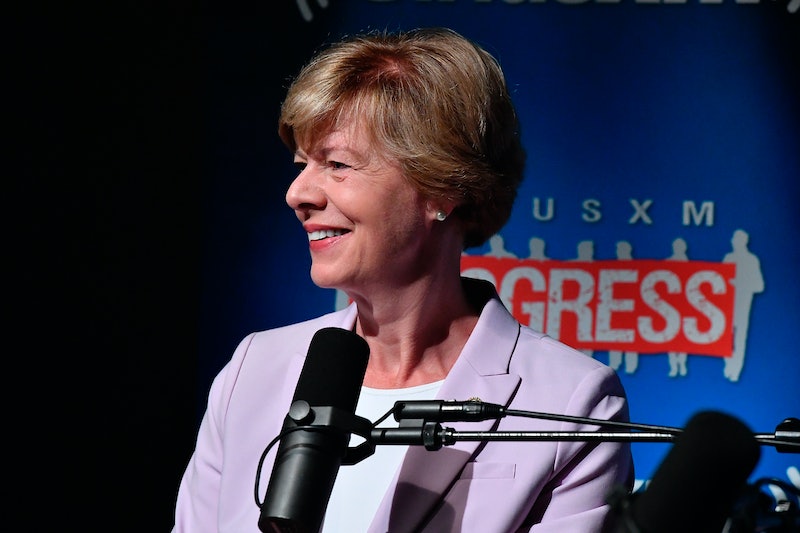 When Wisconsin became the first state to legally protect gay, lesbian, and bisexual residents from discrimination in 1982, Sen. Tammy Baldwin had not yet been elected to public office. She was still in college — and was coming out herself. Some 37 years later, Baldwin is working to pass the Equality Act in Congress to ban discrimination against LGBTQ Americans.

According to House Speaker Nancy Pelosi, the Equality Act will be introduced in both chambers of Congress this week. Baldwin will sponsor the bill in the Senate, and tells Bustle that the proposed legislation would bring the country closer to full equality. Right now, she says, that's far from the case.

"What the truth is, is that in 29 states in the United States, there is a lack of full equality for LGBTQ residents," she says. "That means many have no legal protections where they live."

The Trump administration's attacks on the LGBTQ community over the last two years have crystalized just how much is left to achieve for many in the community. But even before that, LGBTQ people have been left in an uncomfortable rights gap since the Supreme Court ruled in favor of marriage equality in 2015.

She says the Equality Act would change that by protecting LGBTQ Americans from discrimination in a host of areas, including employment, housing, public accommodations, jury service, and access to credit and federal funding. Essentially, the Equality Act would amend existing legislation, including the Civil Rights Act of 1964, and put sexual orientation and gender identity on the same footing as other protected classes such as race, sex, religion, and national origin.

The same bill was introduced in 2017, but it didn't go anywhere. It's now poised to pass the House, given the Democratic majority in that chamber and Pelosi's stated support. But it will be up to public pressure to force Republican Majority Leader Mitch McConnell to bring it to a vote in the Senate. Baldwin says current expectations are "low" that he will.

The Human Rights Campaign (HRC), the country's largest LGBTQ advocacy group, says that outside support is there, particularly among the business community. Bustle has reached out to McConnell's office for comment.

No matter what happens in the Senate, Baldwin tells Bustle that the bill will be passed by the House "for the first time in history." It's never had a floor vote in either chamber.

"Now that is not the same as the Equality Act becoming law," Baldwin says. "It is still a milestone that I think speaks volumes for where the country is and the critical need for this legislation to pass."

Wisconsin was already there nearly four decades ago, though discrimination based on gender identity and expression was only just addressed on a limited basis in an executive order from Democratic Gov. Tony Evers in January. Baldwin, the first openly LGBTQ person in the Senate — who also keeps winning her state by huge margins — says she did benefit from the "debate and education and awareness that was raised by that milestone."

That bit of history could also hold a lesson for presidential candidates campaigning in the state and the eventual nominee, who will be named at the Democratic National Convention in Milwaukee. "The path to the presidency runs right through Wisconsin," Baldwin says. And for the record, Baldwin confirmed to Bustle that she's not entering the crowded Democratic presidential field herself.

Whoever wins the Democratic nomination needs to "focus on the issues that matter the most to Americans," in Baldwin's opinion.

"This is always about listening to the concerns of the constituency," she says. "And frankly, I think those concerns are pretty universal, they're not unique to the industrial heartland or the upper Midwest, you know, the opportunity to get ahead and get fair treatment."

When it comes to Baldwin's work in Congress, ensuring all Americans are treated fairly is where the Equality Act comes in. Her recipe for electoral success is not the same as focusing solely on bread-and-butter issues with no context. "Speak to and work on the issues that keep people up at night — but you do so on the top of a foundation of fairness and justice and equity," Baldwin says.

Pushed further, Baldwin resists the idea that passing a bill like the Equality Act would play into identity politics that some presidential candidates have said Democrats need to move past in order to beat Trump.

"I think another way of looking at it is that it brings everyone closer together," Baldwin tells Bustle, adding that everyone should have an equal opportunity to get a job, buy goods and services, and get an education.

"To keep a roof over our heads, to be able to support ourselves and our families are fundamental American values," she says. "We're trying to pass the Equality Act to make sure everyone can share those equally."