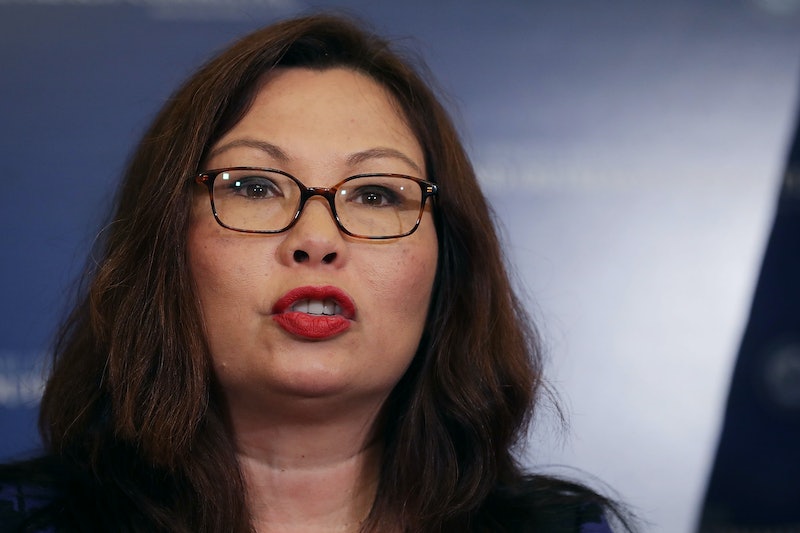 On Monday afternoon, President Donald Trump told a crowd in Cincinnati that Democrats not clapping for him during his State of the Union address was "treasonous." In response to reports about Trump's treason comments, Senator Tammy Duckworth did not hold back, condemning the president for appearing to perpetuate a message that the United States is not a democracy.

Trump made the aforementioned comments during a speech at a manufacturing plant in Ohio. When commenting on Democrats not clapping during much of his speech — a reaction that is historically not uncommon at the State of the Union when a president is from the opposing party — Trump was extremely critical of their response:

They were like death and un-American. Un-American. Somebody said, "treasonous." I mean, Yeah, I guess why not? Can we call that treason? Why not? I mean they certainly didn't seem to love our country that much. But you look at that and it's really very, very sad.

When she heard about Trump's comments, the Illinois senator vigorously condemned the president's words. In response to a tweet from NBC News' Andrea Mitchell, who was sharing her thoughts on the president's remarks, Duckworth replied:

We don't live in a dictatorship or a monarchy. I swore an oath—in the military and in the Senate—to preserve, protect and defend the Constitution of the United States, not to mindlessly cater to the whims of Cadet Bone Spurs and clap when he demands I clap[.]

Duckworth also took Trump to task for his remarks in several other tweets. In one she shared the Constitution's definition of treason, "in case Trump doesn't have a Constitution handy." In another, she shared a quote from Theodore Roosevelt in which the former president stated that it is "unpatriotic and servile" and "morally treasonable to the American public" to say that there must be no criticism of the president; Duckworth also noted that Roosevelt was "a Republican who earned the applause he received."

Others on Twitter also condemned Trump for his comments. Minnesota Rep. Tim Walz, who is also a veteran, also appeared to find Trump's remarks quite disquieting.

I didn't serve 24 years in the uniform of this country to be called treasonous for simply disagreeing with your disastrous policies, Mr. President.

Morning Joe host Joe Scarborough also took a line of critique similar to Duckworth's, saying that Trump's treasonous comments are one of several examples that illustrate that he is "acting like an autocrat."

Speaker of the House Nancy Pelosi echoed the same sentiment on Twitter regarding Trump's apparent demand for applause:

Every American should be alarmed by how @realDonaldTrump is working to make loyalty to him synonymous with loyalty to our country. That is not how democracy works.

An article from CNN's Chris Cillizza on Monday pointed out how Merriam-Webster defines treason:

The same CNN article also suggested that characterizing lack of applause as treasonous is actually dangerous. It could appear that the president is suggesting that dissent is "traitorous and/or un-American." As the article noted, the suppression of dissent does not have a place in a democracy and, indeed, is a primary factor in what differentiates the United States from authoritarian regimes.

The Trump administration has not yet responded to critiques of the president's remarks. But considering the president's Twitter habit, it won't be long before he notices all of the criticism — and Duckworth's scathing nickname for him. You can bet he won't be happy about that one.