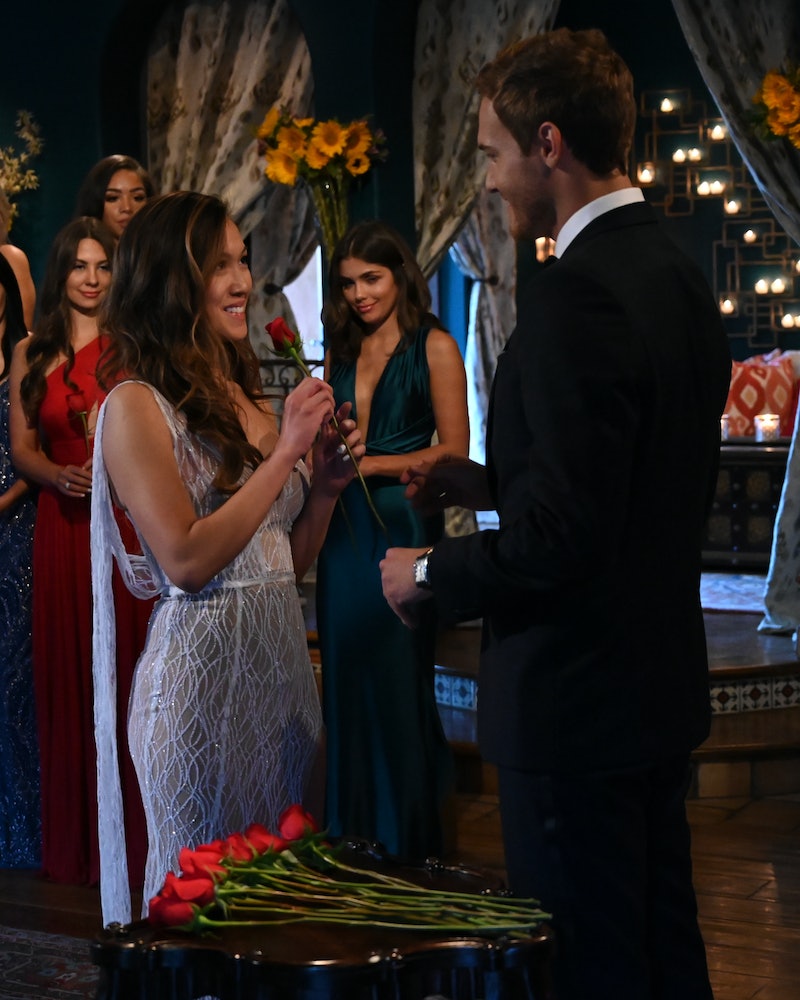 Tammy may have left The Bachelor surrounded by a whole lot of drama, but it looks like she's totally fine with a little controversy. After the episode featuring her elimination aired on Wednesday, Feb. 5, Tammy Ly's live Bachelor tweets show she has no regrets about her time on the show — or her new status as the "villain" of the season. The house flipper was sent home before the Rose Ceremony in Santiago, Chile, after a fight with Mykenna caused some overwhelming drama at the group date.

Tammy — who went from fan favorite to villain after accusing Kelsey of being an alcoholic and "emotionally unstable" — called out Mykenna for being "immature" and not ready for marriage. However, after the fashion blogger defended herself, things escalated to the point that their screaming match interrupted Peter's time with Madison. The next night, he asked the two of them to meet him before the Rose Ceremony for a "two-on-one" in order to get to the bottom of all the drama. Despite Tammy's warnings that Mykenna was only on The Bachelor to build her brand, Peter sided with the fashion blogger and sent Tammy home.

While some members of Bachelor Nation were upset with Tammy starting drama, she laughed it all off on social media. "So sometimes I’m a little bit of a bitch. WHO hasn’t been?" Tammy wrote on Twitter, after her departure from the show aired on TV.

While speaking to cameras after being sent home, Tammy stated that Peter just wanted a "trophy wife," and that she was fine with being sent home if that's the case. "I'm not that, and that's okay," she said. "I'm not going to change for a guy." She doubled down on that opinion on social media, sharing her motto for the new year with all of her followers: "2020 DON'T BE A TROPHY WIFE," Tammy wrote, punctuated with a series of hand clapping emojis.

It's obvious that she's okay with the fact that she and Peter didn't end up together in the end. "Guys it’s literally fine lol," Tammy tweeted, near the end of the episode. She has also used her social media posts to make fun of her actions on the show, joking on Monday, "I'm that b*tch who interrupted a rose ceremony," and revealing that even she couldn't understand what she was saying during a tearful interview.

While Tammy appears to have no regrets over her time on The Bachelor — and still has quite a few fans supporting her online — she has also referenced an influx of negative comments and harassment from Bachelor Nation over the past week, as she became a bigger part of the drama. "Bruh I’m exhausted from deleting negative comments on my insta. Idc anymore go ahead w the comments lmao I’m tired," she wrote on Monday, around the time that her fight with Kelsey aired.

Still, Tammy seems to be focusing on having a positive outlook and embracing her Bachelor actions. "For every person who shows you hatred, remember there are 3x the people who love and support you. Don’t let anyone turn you cruel," she wrote on Instagram in January. Tammy underlined that on Twitter on Monday, when she wrote, "I love you all. Even the mean ones."

Tammy's time on The Bachelor may have been punctuated by a whole lot of drama, but it's clear that not only does she have no regrets about the situation, but that she also has a sense of humor about her new "villain" status. Hopefully she'll take that attitude into the inevitably awkward Women Tell All.