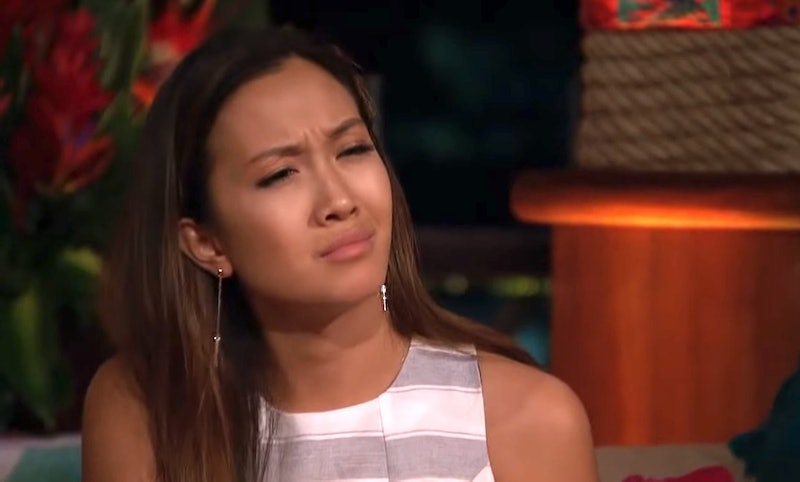 Tammy started Week 5 as the MVP this season of The Bachelor thanks to her fire-starting passion for Peter and her quips about champagne-gate. But, the more outspoken Tammy became, her status with the other contestants — and with some viewers — quickly shifted. And the evolution of Tammy on The Bachelor, who went from fan favorite to villain, is a microcosm of the entire season.

Tammy had one helluva journey in the three-hour-long episode that aired Monday, Feb. 3. Fans on Twitter were living for her commentary early on, like when she proclaimed she'd burn the house down if she didn't get a rose after last week's cliffhanger rose ceremony, and when she tried to comfort Kelsey. Kelsey, another controversial contestant, seemed ignorant of the entire Bachelor process — or at minimum, inconsiderate of her fellow contestants' feelings — as she cried about how hard it was to see Peter with another woman while he was on his one-on-one date with Sydney.

"Kelsey is a hot mess," Tammy told the cameras. "She cried over a champagne bottle for four days. I don't think when my grandpa died I cried for that long."

Tammy's commentary was so on point, she even caught the attention of Demi Burnett, who became everyone's favorite commentator during her stint on Bachelor in Paradise. "Is Tammy coming for my gig?" Demi wondered on Twitter, seemingly as impressed as everyone else.

Tammy also seemed poised to win the group date — at least in viewers' minds. When Hannah Ann started making out with Peter during the Bachelor Cosmopolitan photoshoot, Tammy took the opportunity to highlight the awkwardness, resulting in the most relatable meme to come out of the season thus far.

But she made a cardinal mistake by then bringing up her issues with Kelsey to Peter. She told Peter during the group date party that Kelsey had a "mental breakdown" the previous night and had been "drinking excessively." And thus, the drama between the women that the contestants had thought would go away with Alayah was resurrected.

Tammy wouldn't admit that she was the one who told Peter how emotionally distraught Kelsey had been. But when the women sat together to chat after the group date, she continued to bring up what she saw as Kelsey's unhealthy ways of dealing with her problems through drinking wine and crying. (At this point, we must also question if Tammy is also ignorant of the entire Bachelor process.) And, just like that, Tammy went from icon to villain.

Tammy's fellow contestants turned on her hard, along with the audience. But, in the end, the fights between the women didn't influence Peter's decision. Despite a canceled cocktail hour, Tammy pulled Peter aside during the rose ceremony to explain herself and he ended up giving Tammy a rose, a choice that elicited mixed responses from fans online.

Not all viewers were ready to cancel Tammy. Yet, the preview for the second episode of the week shows that the drama between Tammy and the other contestants is far from over. There's still time for fans to make a final verdict on Tammy's villain status.