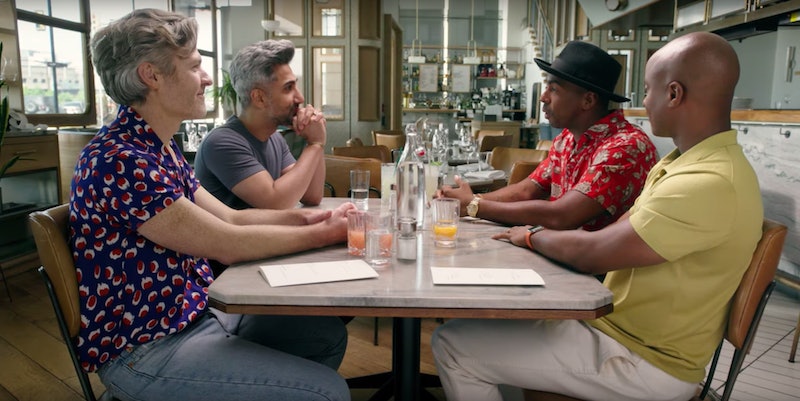 If you haven't checked out the new Netflix series Styling Hollywood yet, perhaps a certain someone named Tan France can convince you. In a new feature for the show, Netflix paired up Styling Hollywood stars Jason Bolden and Adair Curtis with Queer Eye's Tan France and his husband, Rob France. The two married couples go on a double date and share about their relationships, their careers, and what having their own Netflix series means to them as queer men of color.

First, if you're not familiar with Styling Hollywood, the series, which premiered August 30, is about Bolden, a stylist, and Curtis, an interior designer, as they run JSN Studios, their business that operates in both areas. They work with big Hollywood names, like Ava Duvernay, Gabrielle Union, Taraji P. Henson, and Yara Shahidi. The show is basically like The Rachel Zoe Project meets HGTV meets the representation for black LGBTQ people that TV needs.

Now that they're part of the Netflix family, the Double Date feature lets fans learn more about Bolden and Curtis, while also learning more about Tan — who feels like he's been around forever even though Queer Eye somehow only premiered last year — and Rob, who isn't in the public eye like his husband.

Speaking about how they ended up where they are today, Tan explains that his grandfather worked in a denim factory, which got Tan interested in making clothes himself and led to him attending design school. Rob works as an illustrator now, but was previously a pediatric nurse. Bolden went to college originally to become an OB/GYN, but ended up getting a job with designer Cynthia Rowley. Curtis, meanwhile, always knew he was interested in interior design and followed that passion to where he is today.

The men also talk about the importance of their series. "I think what's great about both of our shows is that it shows the power of the queer men," Bolden says. The stylist explains that he never saw relationships that looked like his on TV, and that viewers who have now seen Styling Hollywood have expressed the same feeling. "If I hear 'finally' one more time," he says of fans that have approached him about the show.

After Bolden, Curtis, and Tan talk about representation, Tan turns to Rob, who is white, and jokingly asks what he wants to see in the industry. "My hope is to see less of myself on TV," Rob quips.

Both couples are sweet to see together, but in particular Tan and Rob are so lovey-dovey that its hard for Bolden to handle. "My cast mate Jonathan [Van Ness] hates how we are," Tan says. "He's like, that can't be real that you like each other that much." Well, they do. And so do Bolden and Curtis. Curtis describes their relationship as "rewarding" and "the gift that keeps on giving."

If you'd like to see more of Curtis and Bolden, the eight-episode first season of Styling Hollywood is streaming now. And, of course, all four seasons of Queer Eye are available on the platform, as well.