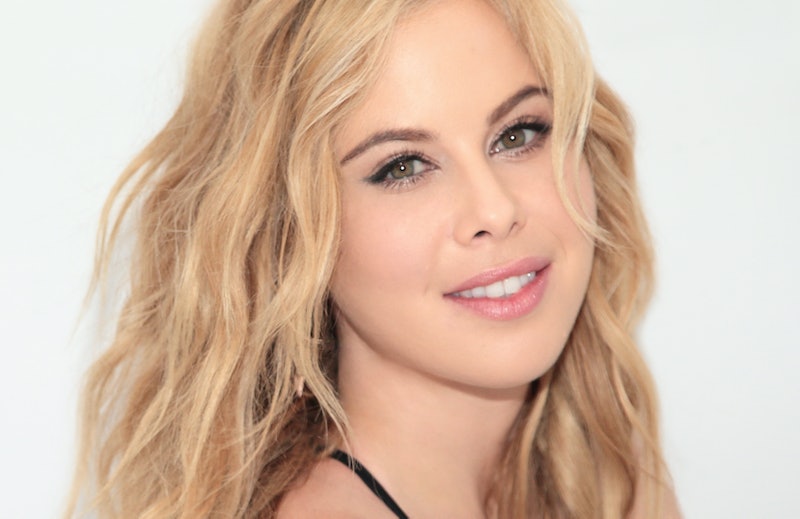 From the time she was just a pre-teen, Tara Lipinski was tearing up ice rinks as one of the leading ice skaters in the world — she was the youngest to ever win a World Figure Skating title when she was just 14 years old. While Lipinski is clearly a natural on the ice, one of the things she says helped her spin so effortlessly on skates were her pre-game meals: Pasta. Literally any kind of pasta.

Now, as the co-host of Food Network's new series 'Wedding Cake Championships' alongside Johnny Weir, Lipinski is gliding into the world of baking elaborate wedding cakes — but, as she tells Bustle, pasta is still her one true love, and her favorite meal.

It's Special Because It's So Comforting

My favorite meal is definitely pasta of any sort. And I mean of any sort — whether it's penne, spaghetti, linguine, or even a sort of ravioli, with arrabbiata sauce, tomato sauce, vodka sauce, pesto... I can eat that meal every day. I think since I grew up training in ice skating, and it was carb-loading that gave me energy all the time, it became a comfort food. Before competitions too, it was my competition meal, so I think that's another reason why I like it so much.

I'm assuming that's it. It's either that, or I just truly have a love of pasta. My go-to is usually penne alla vodka because it's very adaptable, but I love them all.

It Was My Secret Skating Weapon

It was also very much a family thing. While there was an Italian spot near the rink that we'd love and go to on special occasions, usually it was just my mom cooking it at home. I also feel like pasta was always a staple in my family's diets. Like, my mom would always, once a week, have pasta (probably even more than that, actually, because I always loved it so much). It was such a normal thing that I can't even remember in particular the very first time I had it or the first time I loved it — it's almost like I've just always been such a big pasta fan, and always looking for Italian restaurants.

It's One Of The Only Things I Cook — When I Actually Cook, That Is

Even now, I'm always going to a lot of Italian restaurants for pasta. (For the record, my favorite Italian restaurant in New York is L'Artusi in the West Village. Oh my God, it's so good.) I don't cook that much, so I don't make pasta at home that often; I wish I actually cooked more, but I'm traveling so much, and don't like getting stuck in that rut of coming home and being like, "Oh, do I go to the grocery store and load up before I leave in a week?" Also, I feel like I've always loved to bake probably more than I've ever cooked — I think that just comes down to me having a sweet tooth — so it works out.

Bustle's series 'My Favorite Meal' asks famous chefs, bloggers, and tastemakers to describe the one dish, recipe, or ingredient they can't live without — and why.