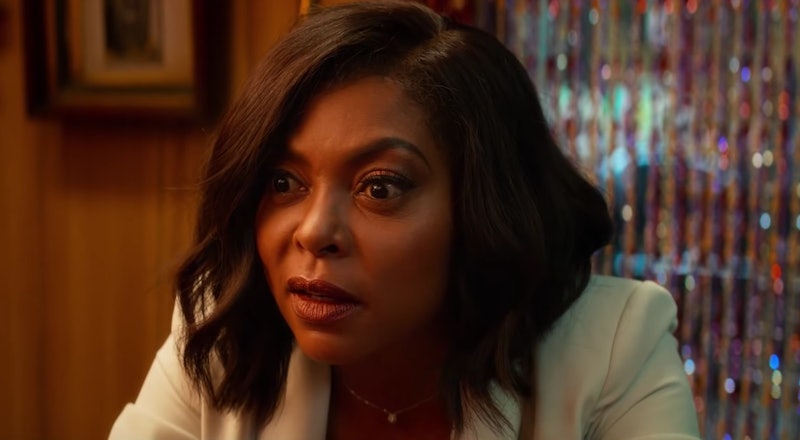 This past year produced two gender-swapped remakes of past movies with Ocean's 8 and Overboard. And 2019 comedy What Men Want is ready to continue this trend. The film, a female-led remake of Mel Gibson's What Women Want, stars Taraji P. Henson, and doesn't come out until Jan. 11, 2019. However, the first What Men Want trailer has arrived, and it will convince fans that the movie is going to be worth the wait.

Not all female reboots necessarily make a great statement about male and female gender roles just simply by swapping main characters' genders, but What Men Want seems like it actually will make much more important observations about the differences between the experiences of people who identify as men versus those who identify as women. What Women Want came out in 2000, and it showed Mel Gibson's character, Nick, getting electrocuted and suddenly gaining the ability to read women's minds. As an advertiser, he uses his psychic abilities to create a campaign that impresses his new boss, Darcy (Helen Hunt), who had gotten the job that Nick had wanted.

A similar story plays out in What Men Want, but in this new version, Henson plays a sports agent who feels undervalued in a company that seems like a "boys club." It's a totally relevant movie to come out now given the #MeToo movement and the many conversations occurring about workplace harassment and the environments that male-dominated workplaces foster. That's all pretty disheartening, but the trailer for What Men Want is so funny that it proves that comedy can portray some current issues perfectly.

Just as What Women Want showed Nick using his ability to read women's minds to advance his career, Henson's character, Ali, uses her newfound abilities to get propel her career, but that means different things in both movies — well, kind of. Both of the What (Wo)men Want versions portray the main characters gaining greater access to their clients' inner thoughts, but for What Women Want, being able to read minds isn't just about knowing what to say or do, it's about knowing how to even get in the room where it happens. In the trailer, Ali uses her ability to gain access to private "boys club" events after she overhears her co-worker, played by New Girls' Max Greenfield, thinking about a men's poker event between her male co-workers and their male clients.

Once Ali gets to the poker game, Tracy Morgan's character asks her, "Little lady, what you doing at the big boys' table?" It's a moment every women who has ever tried to keep up with a group of male co-workers only to get literally belittled can relate to. Then, the same scene reveals that Morgan's inner thoughts consist of him smelling burnt toast only to find a slice of burnt toast in his pocket. It really pokes a hole in the intimidation factor of a male-dominated-setting, and it's hilarious for everyone.

Not only will the subject of What Men Want likely resonate with a lot of working women, it will also certainly delight audiences of all kinds. And that's the real triumph: making socially relevant films that are actually fun to watch, too.