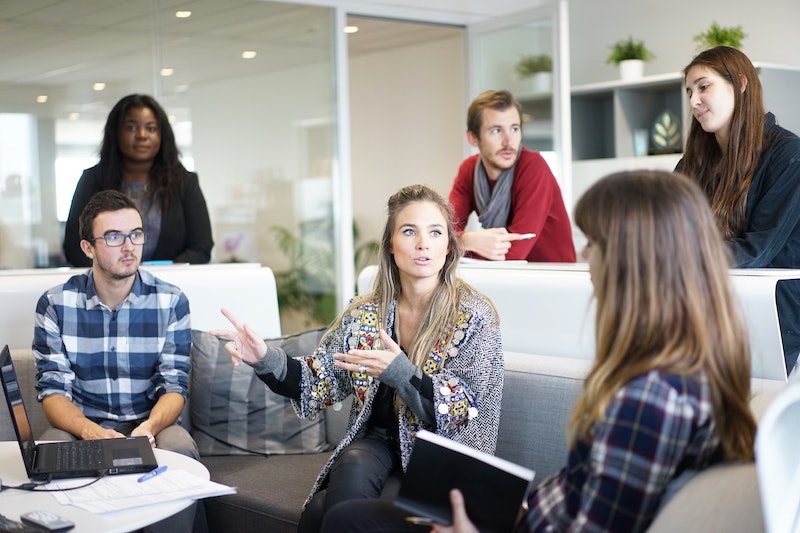 Company culture is a major buzzword in the world of hiring and business. When it comes to improving work productivity and employee relations, gender bias is often something that is easily overlooked. Knowing how to respond to gender bias in the workplace isn't as clear-cut as it may seem, but it's still essential for workers. "Gender diverse companies have higher returns than non-gender diverse companies," Sallie Krawcheck, co-founder of Ellevest, tells Bustle. "They have lower risk, greater innovation, greater employee engagement. The performance of companies with gender-diverse teams is so much better."

Gender bias in the workplace is a hot-button issue that's recently risen to the surface in light of multiple people's allegations of sexism against Uber. On Feb. 19, former Uber engineer Susan Fowler wrote a detailed blog post about why she left Uber, claiming her male manager had allegedly sexually harassed her, but that the company allegedly failed to respond appropriately when she reported it. In a statement, Uber condemned the alleged behavior and the company is in the process of investigating these claims.

A few days ago, another former Uber engineer, Keala Lusk, stepped forward in a post published on Medium to share a similar experience she allegedly had at the company. Said Uber in a statement, “We take any and all allegations of this nature very seriously and have forwarded this to Attorney General Eric Holder and Tammy Albarran to include in their investigation.”

The fact that these allegations of sexism and gender discrimination exist means it's just as important as ever before to continue these conversations about employee equality. Gender bias in the workplace can be as explicit as unwanted sexual advances or as subtle as a seemingly harmless sexist joke told in the office kitchen. While overt sexual harassment is a real problem, women often have to face sexist microaggressions everyday in the workplace, many of which are a result of subconscious biases that people don't even realize they have, Tiffany Eckelberg, director of public relations at The Muse, tells Bustle.

If you've experienced or witnessed gender bias in the workplace, here are 11 ways for knowing how to respond:

More like this
These Cheap Things With Near-Perfect Amazon Reviews Will Make Your Home Look SO Much Better
By Dena Ogden
Your Daily Horoscope For August 18, 2022
By Alexandria Lettman
15 Matching Halloween Costumes For You & Your Dog
By Kirsten Nunez
How To Use Astrology In Dating, According To The AstroTwins
By Brittany Beringer
Get Even More From Bustle — Sign Up For The Newsletter