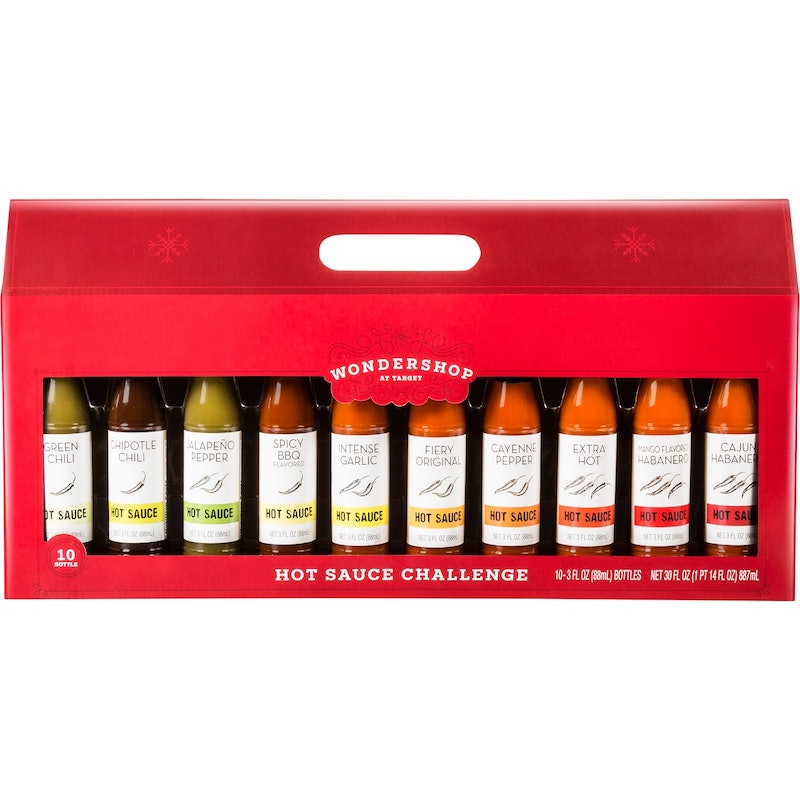 If you’re into gifting for the holidays, odds are you’re already hard at work figuring out what to get all the folks on your list this year. And hey, guess what? The House of the Red Bullseye just dropped the perfect gift for the spicy food lovers in our lives right into our laps: Target has a Hot Sauce Challenge gift set available this year — and it’s just $15. How’s that for a winning pick?

The Hot Sauce Challenge set is part of Target’s Wondershop collection — the primary umbrella under which most of the store’s holiday offerings exist. According to graphic designer Ashley Hohnstein, who worked on the project as lead designer, art director for photo and illustration, and illustrator, planning for the Wondershop rebranding took place in late 2015 in order to debut for the 2016 holiday season. The idea, said Hohnstein on her website, was “to create an all-encompassing holiday experience for our guests, with a range of over 2,000 products.” Goals included “[delivering] on holiday tradition while highlighting trend and style, increased shelf presence, to make the seasonal section of stores feel like a destination.” The first Wondershop season arrived on Nov. 1, 2016 — and clearly, it was a hit: It has returned every year since then, with 2018 marking the collection’s third year.

What’s more, it has expanded. While the 2016 Wondershop offerings focused largely on décor, items like gift sets are now included in the line as well — the Hot Sauce Challenge being one of those gifts. This isn’t actually the first time this set has been available; indeed, according to Delish, Target says it was one of b. As such, it’s not exactly a surprise that it has made a triumphant return for the 2018 season. And at just $15, it’s perfect for all kinds of holiday gifting situations, from White Elephant parties to your bestie who carries a bottle of hot sauce with them wherever they go.

Packaged in a festive red box, the Hot Sauce Challenge set contains 10 three-ounce, glass bottles of hot sauce — each one, of course, being a different flavor ranging from mild to fiery. Things start calm with a tiny bottle of Green Chili hot sauce; Chipotle Chili is next; and Jalapeno Pepper comes after that. From there, though, the flavors start to ramp up: No longer cool and green in color, the sauces start shifting to brighter, red-orange hues. Spicy BBQ, Intense Garlic, and Fiery Original are next on the docket, followed by Cayenne Pepper and Extra Hot. Lastly, we have two habanero flavors: Mango Flavored Habanero and Cajun Habanero.

Between them all, those 10 varieties contain quite the array of spice. For the curious, the kinds of peppers covered by the “green chili” banner generally only rate from around 500 to 2,500 units on the Scoville heat scale — the scale used to measure the spiciness of hot peppers — while habaneros can rate up to 300,000 Scoville units. Habaneros definitely aren’t the spiciest peppers out there (the reigning champ right now is the Carolina Reaper, with an average Scoville score of more than 1.6 million), but they can still sting a bit if you’re not prepared for them.

(By the way, if food allergies are a concern for you, the product listing for the Hot Sauce Challenge set notes that it doesn’t contain any of the eight major allergens — the “Big Eight,” as they’re known, comprising milk, eggs, fish, crustacean shellfish, tree nuts, peanuts, wheat and soybean. However, the listing does also state that the sauces may contain three allergens typically classified as Big Eights — soy, wheat, and fish — so if you or your giftee are allergic to any of those three things, you may want to steer clear. Just, y’know, FYI.)

Need some ideas for what to do with these sauces if you’re lucky enough to receive this set? Beyond just, y’know, enjoying them in all the ways you typically enjoy hot sauce, you’ve got plenty of options. You could have a serious hot sauce tasting, for example — or you could have a slightly less serious hot sauce tasting party. You could create your own version of Hot Ones. Or you could use the sauces for their intended purpose: As the objects of a challenge. Suggested rules for such a challenge can be found here — although I would actually be careful about holding it at your workplace. That could end quite poorly indeed, especially if your workplace is, uh, dysfunctional in any way.

Snag the set online at Target here. May all your holidays be as spicy as your hot little heart desires.