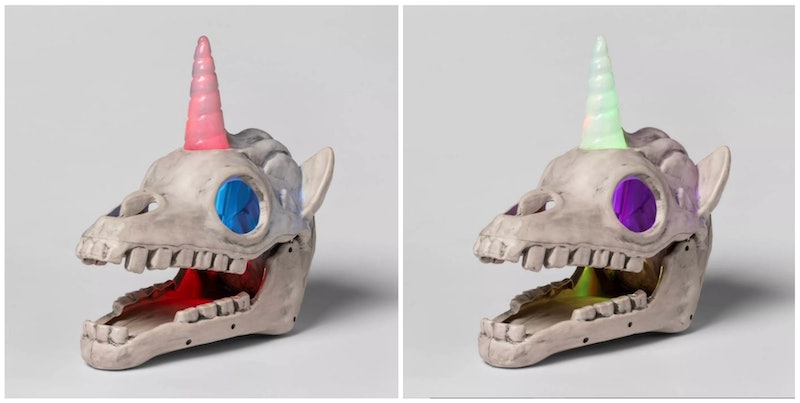 Much is often made of the contrast between people who love unicorns and mermaids and rainbows and those who love bats and skeletons and shades of black and gray — but who says you have to be either one kind of person or the other? Not the House of the Red Bullseye; you can get a color-changing, light-up unicorn skull at Target to add a little pizzazz to your Halloween décor this year. Part of Target’s 2019 Hyde And Eek! Boutique collection, this spooky and magical little objet is the Halloween decoration I didn’t even know I wanted… until now. Because, yes, I absolutely do want it now. Who wants to join me on a Target run?

The Hyde And Eek! Boutique — which I will henceforth be abbreviating as Hyde And Eek for simplicity’s sake — originally launched in 2017. Target had introduced its winter holiday brand, Wondershop, just the previous year, and found it to be such a success that the company decided to see if it could do something similar for Halloween. Said Mark Tritton, then Target’s chief merchandising officer, to RealSimple during Hyde And Eek’s first year, “Last year, we introduced Wondershop — our exclusive seasonal brand for holiday — and guests loved it.” He continued, “We wanted to bring elements of that magic to our Halloween assortment, inviting guests to get into the spirit of things, in a uniquely Target way” — and voila! Hyde And Eek.

Hyde And Eek features everything from décor to costumes (including those rad wheelchair-adaptive costumes that debuted recently) — but I won’t lie: As spectacular as all of the offerings from the line are, few of them are as noteworthy as the one that currently concerns us. (Credit goes to this roundup of Halloween decorations from Best Products for bringing this delightful item to my attention.)

It is a SKULL.

That LIGHTS UP IN THREE DIFFERENT COLORS.

Also, the whole “lighting up in three different colors” gimmick includes both the horn and the inside of the skull’s mouth, so, y’know… this thing means business.

Made of polypropylene, it is not a real skull (of course); it is, however, suitable for both indoor and outdoor use, with a “jaw [that] opens to reveal a multicolored light that changes color when turned on," according to its product listing on Target's website. I appreciate that said jaw is hinged; you can keep it closed if you like, or open it wide up. Personally, I prefer the look of it open — it gives the skull a look of wild abandoned, as if it might start screaming the lyrics to an ‘80s hair band song at the top of its disembodied lungs at any moment — but the point is to have options, you know? Anyway, the horn, too, lights up in three different colors; it can cycle through pink, blue, and green, with the help of three included AAA batteries. A little more than 11 inches high and a bit more than a foot wide, it is, as the product description notes, “a fun twist on classic spookiness.”

I love it, and I will be purchasing one as soon as I can get myself to a Target, or the next time I make an order from the place online — whichever happens first.

That's the skull with its mouth closed, for the curious.

Is it a little weird that it has ears? Yes; like human ears, horse ears are made of cartilage and attached to the skull with muscle and skin, rather than part of the skull themselves. However, I wouldn’t go so far as the person who wrote the one review currently available on Target’s website; the review isn’t even an actual review of the item, but rather simply a rant about how ears are not made of bone and therefore should not be present on skulls. (That is, it is absolutely the Halloween décor version of a “Wrong Shade, One Star” review.)

Besides, unicorns are mythological creatures. How do you know their ears aren’t made of bone? Maybe unicorn ears are made of something different than regular horse ears are. We don’t know. We have no way of knowing. Suspend your disbelief — and also just, y’know, let people have their fun.

Hyde And Eek does have a wide array of other truly wonderful Halloween décor options, too, if unicorns aren’t your thing; I’m quite fond of this crouching cat skeleton, for example, and something about this three-headed, presumably flesh-eating plant is really doing it for me. (I think it has something to do with the major Little Shop Of Horrors vibes it’s giving off.) There’s even a light-up dragon skull, if you’d rather have an undead lizard creature guarding your keep, rather than an undead equine one.