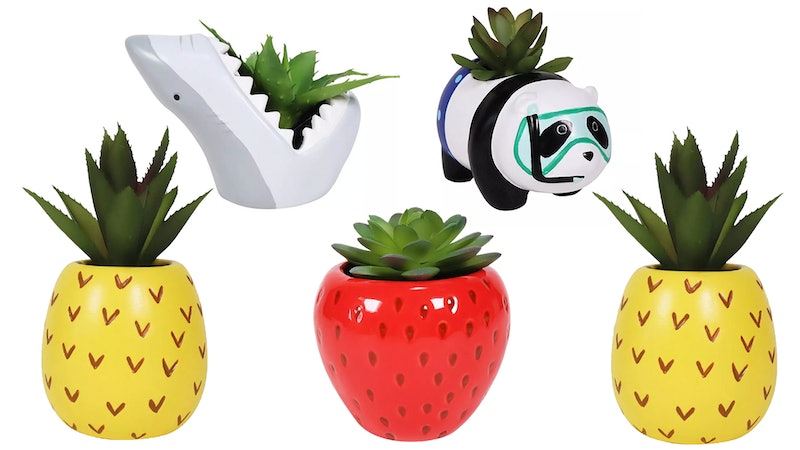 If you want some greenery in your space but can’t be trusted to keep a plant alive, you’re in luck because Target has a new line of fake succulents. Dubbed the “Sun Squad,” the plants are adorable, affordable, and completely artificial — the three 'As' for anyone who longs for an array of houseplants but has managed to kill multiple cacti.

Each of the potted fake succulents stands just under 4 inches tall. So, you’ll be able to nestle them into whatever space in your house needs a pop of greenery. Also, they’re all just $5 each and available for delivery. Dreams do come true. (So long as your dreams are limited to cute fake succulents.)

If you long to be part of the gardening trend but don’t want to sacrifice innocent greenery in the process, fake plants might be the happy medium you seek. (Or at least a fail-safe way to get a green-ish thumb.) If you think artificial plants are merely tacky mall decor, think again. Realistic artificial plants have seen a resurgence in recent years.

In 2018, Urban Outfitters launched a line of fake succulents that took artificial greenery to a whole new level. There were fake cherry blossoms and peonies that looked freshly picked (available for $6). There was artificial ambrosia that would fool most house guests ($24). Then, there were fake plants that cost more than most real plants I’ve purchased: 2-and-a-half foot monstera leaves ($50 each) and two-leaf strelitzia plants ($100). While most of that floral collection is no longer available, Urban Outfitters still sells tons of artificial plants that range from pampas grass ($8) to tropical yucca plant ($134).

Of course, if you aren’t looking to take out a small loan to start a fake succulent garden, there are more affordable but equally realistic artificial options. Target’s newest line will be just the green-adjacent salve you seek.

More like this
Saving Money Around The House Would Be So Much Easier If You Tried Any Of These Clever, Cheap Things
By Sara Brown-Rigoli
50 Cheap Things On Amazon You'll Get A Ton Of Use Out Of
By Rebecca Martinson
Real Estate Brokers & Contractors Say These Cheap Things Make Your Home Look 10x Better
By Allison Bolt
The 10 Best Brooklinen Alternatives
By Lauren Moison
Get Even More From Bustle — Sign Up For The Newsletter
From hair trends to relationship advice, our daily newsletter has everything you need to sound like a person who’s on TikTok, even if you aren’t.