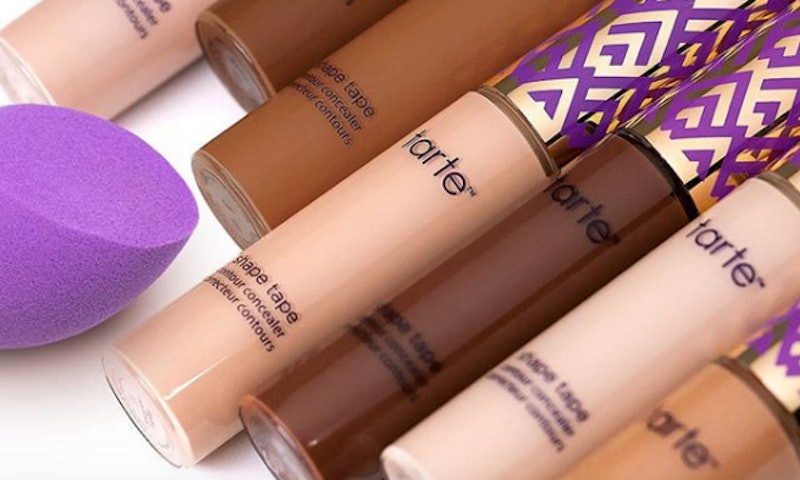 As far as cult-favorite concealers go, Tarte's Shape Tape Contour Concealer has a massive fan base. From YouTube beauty gurus to Instagram makeup artists to at-home novices, almost everyone swears by the miracle-working product. Which is why when the brand revealed it will finally be launching its Shape Tape foundation, the internet went wild. But the hype fell by a few points once the shade range of the product was revealed, and beauty lovers who were excluded thanks to their skin tone went on Twitter to voice their disappointment. Tarte's Shape Tape Foundation's shade range isn't as inclusive as fans have hoped it would be.

During a time when Rihanna's Fenty Beauty foundation color range has not only smashed expectations, but has also disproved the beauty industry worry that having too many colors wouldn't be profitable, more and more brands have jumped on the inclusivity band wagon and have started catering to a wider range of skin tones. From Huda Beauty to Kylie Cosmetics, more and more brands are making sure there are enough shades in their products to cater to a wide variety of customers. But according to its fans, Tarte did not follow in those footsteps.

In the new foundation, there are 15 shades available, and according to Twitter, only two options are suitable for customers with deep complexions.

As many people have pointed out on Twitter, it looks like there are 13 light-skinned options which have taken into account different undertone needs and shade shifts, but only two dark skinned options that leap from "medium" to "dark." The same kind of color-matching care was not involved for the darker range, which excludes a great deal of people.

As one Twitter user pointed out, the first row of light-skinned foundation shades nearly look identical, highlighting the care that was put into creating fair-skin options.

Not many people see a huge difference when it comes to the lighter toned options, meaning that fair-skinned shoppers will be able to find their true match easily. That same privileged was not extended to darker toned customers.

Others pointed out how unrealistic it is to jump from a medium-dark shade to a deeper one without any gradient colors in between. It makes it very difficult to find your correct match when there are only two options involved.

Some people commented how the last two colors look like they were added as an after-thought so as not to be called out for a lack of diversity in the line. Customers tweeting felt that the brand didn't try very hard to include POC into their product, but knew if there wasn't at least one shade there would be backlash.

Many comments on Twitter and Instagram showed that people were really excited for the foundation, but once they saw they couldn't buy it because there was no shade available for them, the excitement ended.

Many people were also tired with the idea that including POC in makeup lines is "innovative." In 2018, acknowledging that brown and black people buy makeup shouldn't be seen as revolutionary. Including more than two shade options should not be seen as ground breaking, just standard. All different kinds of skin tones use cosmetics, and there should be options available for them, especially from mainstream, well-established brands.

Because of it, many people no longer are excited about using or reviewing the product.

Though there is a 10-shade expansion in the works, the original launch has left negative feelings with many fans and they are unsure if they want to buy the product even if it eventually comes in their shade.

Many now feel like their skin color will be added into the collection as an after thought, or because there was so much backlash the brand has no choice but to expand.

Because of that, they do not plan to buy the foundation when the expansion comes out.

Some were confused why the foundation didn't just launch all the shades together, especially since an expansion was meant to be added so quickly after the original product drop.

According to PopSugar, who has the exclusive details, the original plan was to debut with a smaller range and then expand into more colors, meaning those extra 10 shades have always been part of the blueprint rather than added as a result of backlash. The Tarte rep told PopSugar that more shades are updated seasonally since skin tones change during the summer versus the winter, but Twitter wasn't buying that explanation, either. Update: PopSugar has updated their article to clarify that this was the opinion of the author, not a quote from a Tarte rep.

The Tarte rep also told PopSugar that it takes time to develop a full range of foundation since it's tricky to nail down the correct warm and cool undertones, but as fans on social media have stressed, the brand should have waited longer to release the foundation if they could only nail down two dark toned shades.

Bustle has reached out to Tarte but has not received comment. While there are no specifics on what the expanded shade range will look like, one can hope it will be more comprehensive than the original.