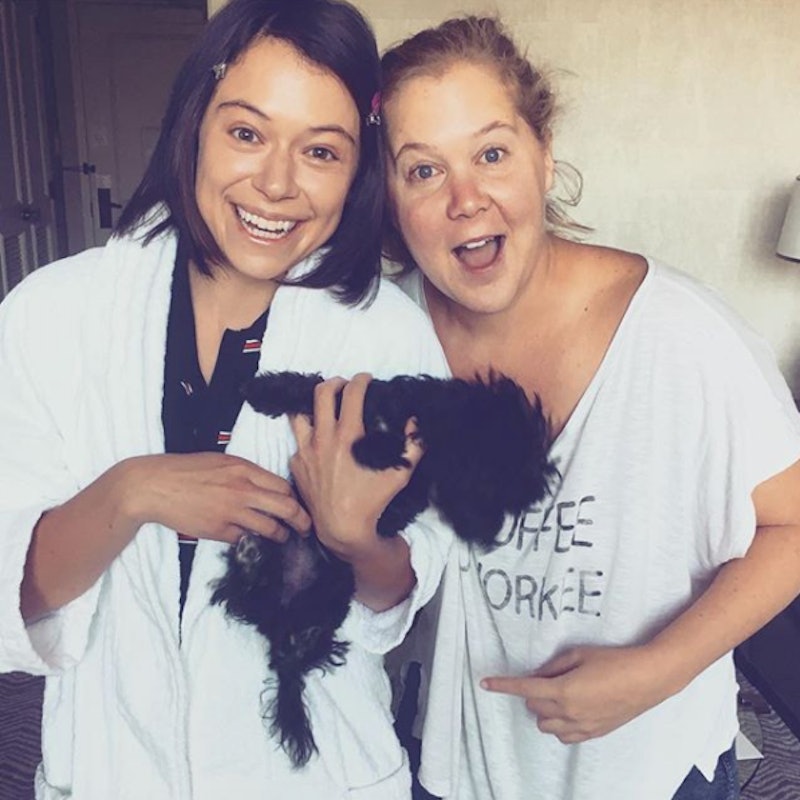 If, earlier in September, you saw an adorable Instagram post of Amy Schumer and Tatiana Maslany posing together, you probably assumed the duo were basically BFF. After all, the photo shows Maslany excitedly holding the comedian's puppy — who, you'd learn if you scrolled through Schumer's account, is also named Tatiana Maslany. Naming your dog after someone else, and posing with that person? Sounds like a total BFF move. But as it turns out, Schumer and Maslany actually barely knew each other when the former Orphan Black star discovered she was the namesake for her fellow actor's adorable new dog.

"We met briefly on a red carpet," Maslany explains, during a recent interview at Bustle's New York studio for her new movie Stronger. She adds that "Schumer has always been super cool to me, and super supportive." But while that may be the case, Maslany admits that she didn't exactly know the comedian well before meeting her dog, so the idea that Schumer named her puppy after her came as a bit of a surprise. "I guess she was a fan of Orphan Black," Maslany says with a laugh.

The idea that Schumer didn't actually know Maslany well before naming her puppy after her is pretty great — especially when you learn how Maslany (the human one) discovered the tribute. "We were in Boston just recently, and my agents were in the lobby of a hotel and they heard somebody going, 'Tatiana Tatiana!'" the actor recalls. "And they thought it was me who was being called, and they came around the corner, and it was Amy Schumer with her puppy. And they’re like, 'what did you call her?' And she’s like, 'Tatiana, Tatiana Maslany.'"

'They’re like, 'OK that’s weird, that’s our client, she’s at this hotel,'" Maslany continues, with a big laugh. Her agents found her nearby, and as the now-legendary photo proves, Maslany "finally got to meet little Tati." As for how hanging out with her her pint-sized doppleganger went? "It was great," the actor says with a grin.

Even a minor incident didn't stop the meeting from exceeding Maslany's expectations. "[Schumer's] dog pooped on my carpet, and it was great. We were just bonded forever," she says, laughing. "I peaked, I totally peaked."

If Maslany enjoyed the meeting, just think about how happy Schumer must've been; in an Instagram posted in August, the comedian explained that she named her puppy after Maslany because "she is my favorite actress." Getting to hang out with the namesake for her beloved dog must have been a true highlight of Schumer's day, and one can imagine the meeting being only the start of a real friendship between the two actors.

Besides, although they're known for vastly different types of work — Schumer for hard-R comedy, Maslany for serious drama — the duo actually have a lot in common. For one thing, they both work as producers, in addition to their acting jobs, making them two of a small but growing number of women behind-the-scenes. And for another, they both clearly appreciate a good laugh; Schumer's shown this in all of her work, of course, while Maslany has had her share of fun guest-starring on shows like Parks and Rec.

After this meeting, though, it's hard to imagine Tatiana Maslany the dog not bringing the actors' friendship to a whole other level. Perhaps the next move will be the two ladies starring in a movie together, with the puppy playing a central role — how good would that be? Suffice to say if that kind of collaboration ever happens, it'll more than make up for any trouble Tatiana the dog may have caused for his human counterpart.

More like this
'That '90s Show' Star Callie Haverda Got Advice From Mila Kunis & Ashton Kutcher
By Brad Witter
At 28, Debra Jo Rupp Was Living A Much Different '70s Show
By Grace Wehniainen
'Bling Empire: New York’ Star Dorothy Wang Wants To Try 'The Simple Life'
By Alyssa Lapid
At 28, Rosie Perez Risked Her Career To Stop Playing Stereotypes
By Gabrielle Bondi
Get Even More From Bustle — Sign Up For The Newsletter
From hair trends to relationship advice, our daily newsletter has everything you need to sound like a person who’s on TikTok, even if you aren’t.