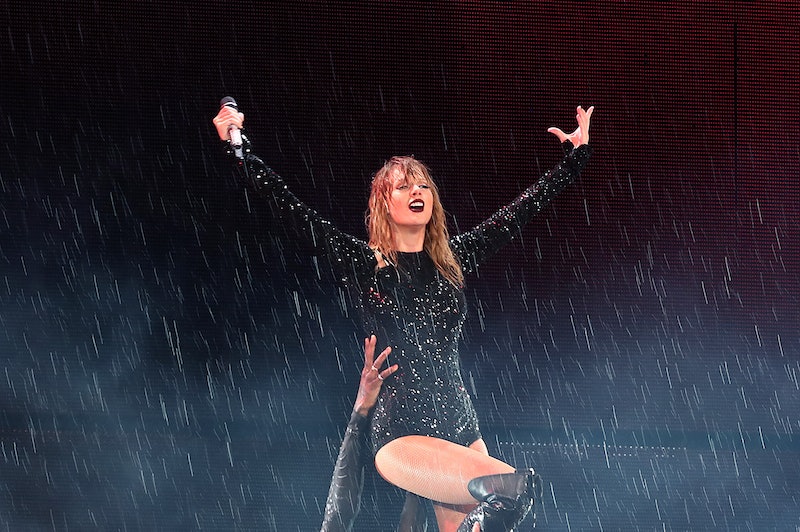 If you went to a stop on Taylor Swift’s Reputation Stadium Tour — or watched her Netflix special — then you definitely noticed the true star of the show: Karyn the snake. Even the most hardcore Swifties will admit that the giant inflatable snake that appeared during her show was the true defining moment of her epic spectacle. And it turns out that Karyn meant more to Swift than attendees may have imagined. In an essay for Elle magazine published Wednesday, March 6, Taylor Swift alluded to Kim Kardashian's snake comments and revealed that Karyn was an emotional and healing response to the backlash that swiftly spread across across social media.

In 2016, Kardashian publicly called Swift a snake on social media after posting clips that showed footage of the singer seemingly approving the infamous lyrics about herself in Kanye West’s song “Famous”. Thousands of Instagram users took the couple's side in the public feud and filled Swift's Instagram comment sections with snake emojis. In her essay for Elle, the singer revealed that dealing with the backlash was one of the lowest periods of her life.

“I learned that disarming someone’s petty bullying can be as simple as learning to laugh,” she wrote. “In my experience, I’ve come to see that bullies want to be feared and taken seriously.” She continued:

"A few years ago, someone started an online hate campaign by calling me a snake on the internet. The fact that so many people jumped on board with it led me to feeling lower than I’ve ever felt in my life, but I can’t tell you how hard I had to keep from laughing every time my 63-foot inflatable cobra named Karyn appeared onstage in front of 60,000 screaming fans."

The all-important moment of her show happened during Swift's thrilling performance of "Look What You Made Me Do." During the bridge, a snake slowly inflated from behind the giant screens until it towered above the singer and her dancers (on a titled stage, no less). It instantly became a symbol of defiance and an inside joke for Swifties who stayed loyal to the singer — not to mention one of the tour's most Instagrammable moments. “It’s the Stadium Tour equivalent of responding to a troll’s hateful Instagram comment with ‘lol.’,” she remarked.

Never one to allow anyone else to have the last word, Swift used Karyn to turn a moment of hatred into a life lesson for herself and her fans on how to get past rough times. “It would be nice if we could get an apology from people who bully us, but maybe all I’ll ever get is the satisfaction of knowing I could survive it, and thrive in spite of it."

This advice also helped shape another life lesson she wrote about for Elle: knowing when to be polite and when to stand up for yourself. It turns out, being called a snake helped Swift realize that snakes have great qualities that should be adopted by humankind. "Be like a snake—only bite if someone steps on you," Swift explained. As a person with a huge fear of snakes (Karyn excluded), this advice is tough to swallow. But given that it's coming from Taylor Swift herself, it's probably best that we listen.