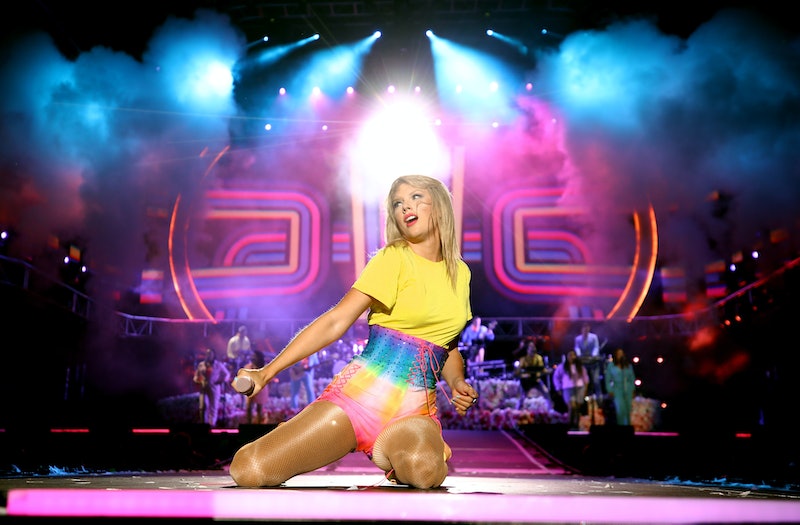 If you've been thinking to yourself, "Hmm, I really need more live Taylor Swift performances," then boy is this good news for you: Taylor Swift is headlining Amazon's Prime Day Concert and you can watch it live thanks to Amazon Prime. As People reported, the concert is acting as a kickoff for the company's annual two-day summer sale, and will be available to watch after the fact, as long as you're an Amazon Prime customer.

Swift's performance was announced on Thursday, June 27, and will take place July 10, with a live stream starting at 9 p.m. E.T. and presented by Amazon Music. Swift is headlining the live concert, but the lineup also includes artists Dua Lipa, SZA, and Becky G, and will be hosted by Jane Lynch, the lovable "bad guy" Sue Sylvester from Glee. “We can’t wait to celebrate Prime Day with an extraordinary night of unforgettable performances, for members around the globe,” said Steve Boom, Vice President of Amazon Music, according to People. “Prime Day brings members the best of both entertainment and shopping. To celebrate, we’ve curated a lineup across multiple genres with performances from artists our customers love. We’re looking forward to celebrating Prime Day with this can’t-miss, one-of-a-kind event.”

It is "exclusively for Prime members," so unfortunately if you aren't one, you won't be able to watch your favorite artists perform. Prime members, however, will be able to watch live and stream the show any time afterwards as well. And if you're a major Swiftie who's itching for a way to watch, but aren't currently a Prime member, packages start at $8.99 a month and goes up to $12.99, according to People. Or if you really want to commit to it, you can splurge for $119 a year right off the bat. Anything for Swift, right?

Swift also announced her involvement in the Amazon Prime concert on her Instagram Story. "Hey guys it's Taylor, I'm going to be performing live at the Prime Day concert," she told her followers in a video before telling fans where and when they can catch her set. "And I'm so excited to see you," she added.

It's unclear how long Swift's set will last, but fans should expect to see her perform some of her old hits as well as her newest singles "ME!" and "You Need To Calm Down," which just premiered a bright, bubbly video filled with LGBTQ+ icons. The video also notably marked the very end of her feud with Katy Perry, who appeared in her Met Gala burger dress. Of course, fans might be hoping that she'll take the opportunity to debut some new songs off her upcoming album, Lover, which is scheduled for release on August 23. It wouldn't be the first time the singer-songwriter decided to surprise fans with new music.

In any event, fans can watch Swift take on this Amazon Prime Day concert, right before huge sales take place on the site from July 15 to 16. It's really a win-win.