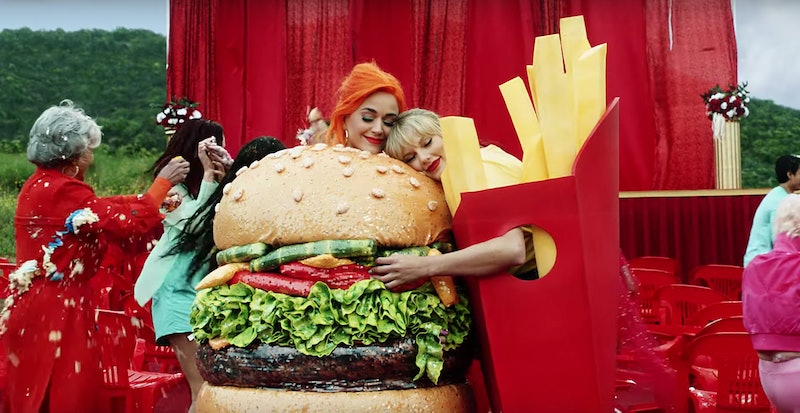 Taylor Swift has this whole celebrity thing on lock. Whether you like her or not, she has the media, and fans, wrapped up in her every move, and for good reason. All of the celebrity cameos in the "You Need To Calm Down" video are reason enough. Just days after the release of her second single, "You Need To Calm Down," on June 14, from her highly anticipated album Lover, the singer dropped the star-studded music video for the song, and to say it's full of celebrity cameos would be an understatement.

The video itself is like a mini-movie that takes place in a super queer trailer park, continuing Swift's celebration of Pride Month. "You Need To Calm Down" has already been called a gay anthem thanks to lyrics like, "Why are you mad when you could be GLAAD?" — spelled out to represent the organization Gay & Lesbian Alliance Against Defamation, as seen in the "You Need To Calm Down" lyric video. With the bright colors of the last two singles and her outward support of the LGBTQ+ community, Swift has been on full celebration mode for June, and the line of celebs in the video is just another ode to her queer fans.

Ever since Taylor Swift was just starting out, she's had momentous interviews on The Ellen DeGeneres Show. From the time she was spilling tea on how Joe Jonas broke up with her, or regretting telling that story now, she and DeGeneres always seem to get on well. They even joked about how she should be in a video, and voila! In this one, DeGeneres is in a trailer, getting a tattoo of the words, "Cruel Summer," on her inside forearm.

Reynolds is married to one of Taylor Swift's best celebrity friends, Blakey Lively, so it's no question by Mr. Lively was in this new music video. He's been known to party it up at Swift's shindigs, including her costume New Year's Eve bash this year. In this, Reynolds is a focused painter among the massive cake fight, busy recreating a storefront with a Pride flag, bless his soul.

Cox made her big breakthrough on Orange Is The New Black and has been trailblazing ever since. She was the first transgender person to be nominated for an Emmy Award in an acting for the show and of course is a LGBTQ+ advocate. And in "You Need To Calm Down," she's the owner of a gorgeously pink, flamingo-paradise of a trailer home, causing Chester Lockhart to faint with her gorgeousness.

Taylor Swift and Katy Perry have made "peace at last," per Perry's Instagram, and her surprise inclusion in this video is an iconic end to all the drama.

Bobby Berk, Karamo Brown, Jonathan Van Ness, Antoni Porowski, and Tan France are icons at this point thanks to their Netflix original series and are basically adored by anyone with an account. France is first seen in the video downing bit of tea straight from the pot in the gaze of bigoted protesters. Then they're all having tea with Lady Swift in a rather posh placement setting. Fabulous, as always.

The Pose star has become a fashion icon in his own right, slaying audiences on and off screen whether it's at the Met Gala or the Oscars. Billy Porter just seems to bring extravagance with him wherever he goes, and Swift's music video was no different. He steps in between innocent sunbathers and those protesters, in a wig and dress. The image of fearlessness? Yes, yes he is.

Making his start on American Idol, Lambert has always been known for his strong voice and great eyeliner. He's openly gay, an advocate for the community, and a major collaborator with the band, Queen, so he has enough cred to tattoo Ellen DeGeneres, right? He reportedly scored this cameo by bumping into Swift at a taping of the Ellen show, making his appearance a no-brainer.

Swift and Jesse Tyler Ferguson recently performed together at Stonewall when she showed up to the landmark on June 14, the same day this song premiered. He's obviously a big advocate in the community, and the Modern Family star, along with his husband, Justin Mikita, have done a lot to fight for same-sex marriage, before it was legalized in 2015. They were married in 2013, but it just makes sense that the two acted out a wedding in Swift's video.

RuPaul, you know, from RuPaul's Drag Race, made a special appearance, in all his judging glory. The actor, TV personality, and drag queen is a staple in the queer community, along with his iconic show. It's super fitting that he was the one to crown the winner of the "Pop Queen Pageant" drag race in the video, right before the food fight breaks out.

If you're not familiar with RuPaul's Drag Race, then you might have wondered if all the drag queens on stage were well-known or from the show. Yes, almost all of them are, as the Twitter user @suprqueen tweeted after the video came out. According to the user, the Pop Queens in "You Need To Calm Down" are Tatianna (Ariana Grande), Trinity The Tuck (Lady Gaga), Delta Work (Adele), Trinity K. Bonet (Cardi B), Jade Jolie (Taylor Swift), Adore Delano (Katy Perry), and A'keria C. Davenport (Nicki Minaj) all competed on the series. Riley Knoxx (Beyoncé) is a transgender Beyoncé impersonator and has earned herself the title of "D.C.'s Own Beyoncé."

Swifties are sure to recognize Hall, who is super good friends with Swift, partying at her place on many occasions. He also executive produced this video with the singer, which is super cool. Meanwhile, Lockhart has appeared on many of Hall's videos, and has his own budding music career.

Lesbian Jesus herself, Hayley Kiyoko, made an appearance in the video as one of the residents of the trailer park mentioned before (that this whole thing takes place in). The singer is playing around with a bow and arrow, getting a bullseye, to her extreme happiness.

In addition to being an Olympic athlete, Adam Rippon is charismatic, attractive, and athletic. What more could you want from the man? Oh, for him to serve you snow cones while in a mesh crop top? Swift has granted your wish. Rippon is the first openly gay athlete to compete in the Winter Olympics and he then went on to dominate Dancing With The Stars. Please, serve continue serving, sir.

A dancing king on the internet, Dexter Mayfield is joy personified. Whether he's dancing or strutting down the runway, he is working it. He's a plus-sized model and with his style and personality, it only makes sense that he's dancing through the whole Swift video.

You probably know Hannah Hart from her YouTube channel, specifically her "My Drunk Kitchen" series. She's now an author as well, and doing bicep workouts in Swift's video with Mayfield in the background. Living her best life? Yes.

And, if that wasn't enough hidden gems for you, Swift's "You Need To Calm Down" was also full of Easter eggs that were almost as tough to spot. Happy hunting, Swifties!

More like this
Taylor Swift Calls Dwayne Johnson "The Man" After Revealing New "Taylor's Version" Song
By Jake Viswanath
Taylor Swift & Her Mom Clap Back Against The “Shake It Off” Plagiarism Lawsuit
By Jake Viswanath
Lil Nas X, Jack Harlow, & Harry Styles Lead The 2022 MTV VMAs Nominations
By Jake Viswanath
Christina Aguilera Took A Powerful Stand At Brighton Pride
By Sam Ramsden
Get Even More From Bustle — Sign Up For The Newsletter