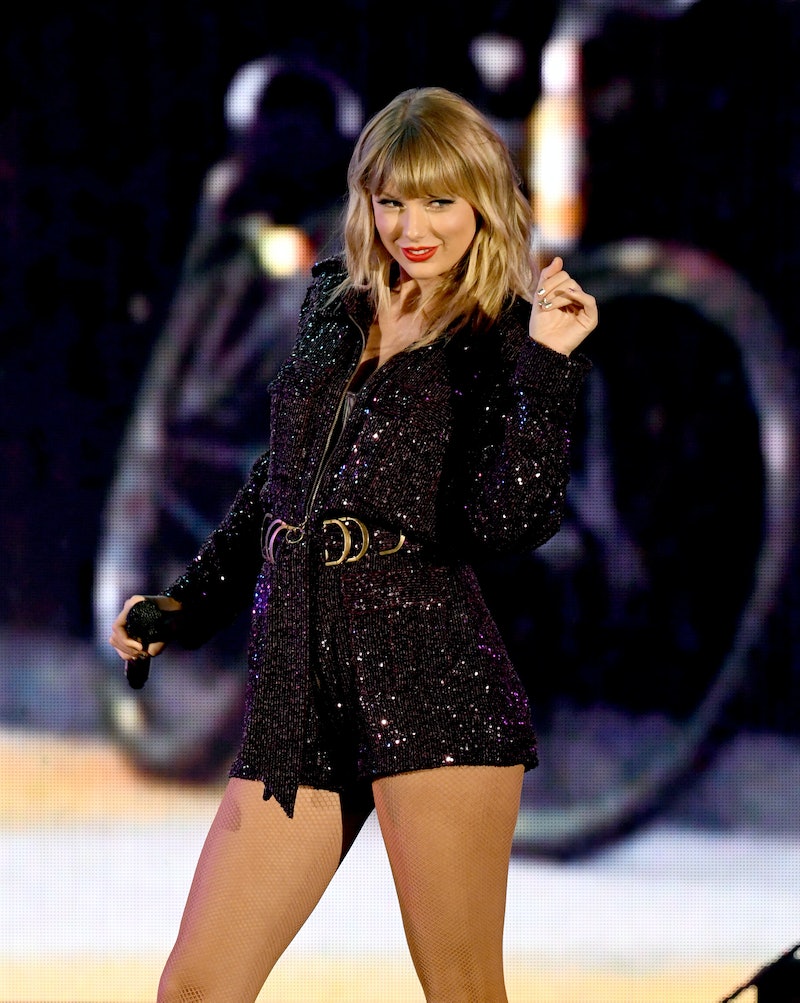 Swifties who missed out on tickets to the singer's virtually sold out Lover Fest shows, rejoice! Taylor Swift just announced a new U.S. show, giving fans one more chance to see her live next year. The singer will be headlining the Capital One JamFest in Atlanta on April 5, 2020, in Atlanta. And it's free to attend.

The JamFest show is part of the 2020 NCAA March Madness Music Festival, a free three-day music event that begins on April 3 and takes place at Atlanta’s Centennial Olympic Park. Previous headliners of JamFest include Bruce Springsteen, Maroon 5, Aerosmith, and Swift's "You Need to Calm Down" music video co-star, Katy Perry.

“We could not be more excited to have Taylor Swift, one of the most successful artists in history, headline this event in 2020 and the unique opportunity to offer this to fans for free,” Byron Daub, vice president of sponsorships and experiential marketing, Capital One, told People in a statement, announcing the news.

In September, Swift announced that she would be embarking on a run of international concert dates and festivals in the summer of 2020 to promote her new album Lover — and creating her own festival in the U.S. “The Lover album is open fields, sunsets, and SUMMER,” she said on Twitter. “I want to perform it in a way that feels authentic. I want to go to some places I haven’t been and play festivals. Where we didn’t have festivals, we made some. Introducing, Lover Fest East + West!”

Lover Fest West takes place on July 25 and 26 at Los Angeles' SoFi Stadium, where Swift will be the inaugural artist to perform at the new venue. And Lover Fest East will hit Gillette Stadium in Foxbourough, Mass. on July 31 and Aug. 1. Opening acts for all four shows will be announced soon.

Upon announcement, the Lover Fest shows were declared as Swift's only U.S. concert dates of 2020. So the JamFest will be Swift's only scheduled concert outside of Lover Fest — as far as we know.

More like this
The Ticketmaster Senate Hearing & Taylor Swift Tickets Debacle, Explained
By Jake Viswanath
Taylor Swift May Miss The 2023 Grammys For Reasons Fans Know “All Too Well”
By Jake Viswanath
The 12 Most Controversial & Unexpected Grammy Moments Ever
By Jake Viswanath
Jay-Z Is Performing At The Grammys, Meaning Beyoncé Might Actually Show Up
By Jake Viswanath
Get Even More From Bustle — Sign Up For The Newsletter
From hair trends to relationship advice, our daily newsletter has everything you need to sound like a person who’s on TikTok, even if you aren’t.