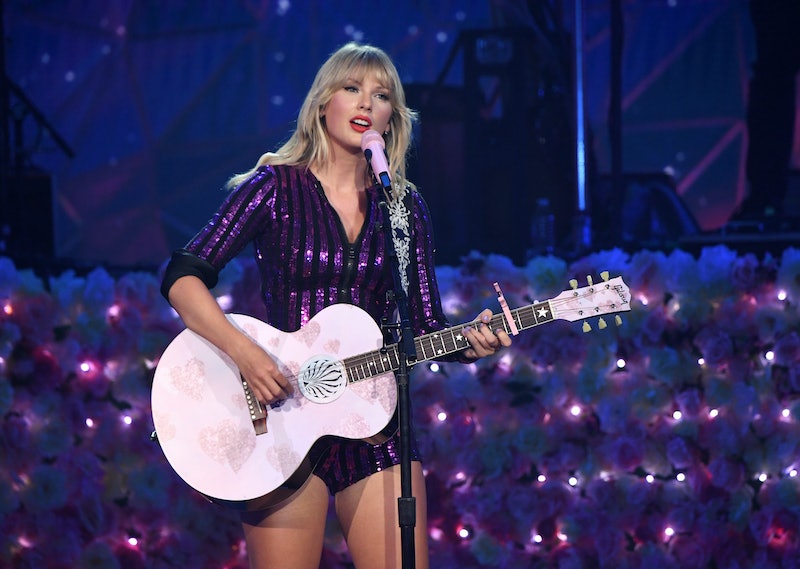 It's been three months since Taylor Swift called out Big Machine Records label head Scott Borchetta for selling the label — and her masters — to Scooter Braun, and now, she's finally explaining why she decided to make her feud with the music executives so public. In a recent interview with UK publication Music Week, Taylor Swift said she made her fight for her masters public to warn others who are entering the music industry about what actually goes on behind the scenes. According to BuzzFeed, the singer revealed that "the only reason" why she decided to speak out about Braun's decision to purchase her masters was to make others aware of what she was really going through.

"I thought it was important that the fans knew what I was going through, because I knew that it was going to affect every aspect of my life and I wanted them to be the first to know," Swift told the outlet, adding that many of her fans are aspiring musicians. And to that end, she wanted to spread awareness to "every new artist that is reading [my Tumblr post] and going, 'Wait, that's what I'm signing?!'"

On July 30, Swift revealed in a Tumblr post that she was disappointed to find out that Braun's Ithaca Holdings Company had bought Big Machine Records from Borchetta, and thus, would now be the owner of the master recordings from her first six studio albums. Describing the situation as her "worst case scenario," Swift wrote that she didn't find out about the sale until after it went public, and accused Braun of "bullying" her over the years.

"For years I asked, pleaded for a chance to own my work," Swift wrote. "Instead I was given an opportunity to sign back up to Big Machine Records and ‘earn’ one album back at a time, one for every new one I turned in. I walked away," she continued.

In the interview with Music Week, Swift explained that she felt constrained by the "creative differences" between herself and Borchetta while working with Big Machine. "In my previous situation, there were creative constraints — issues that we had over the years. I've always given 100% to projects. I always over-delivered thinking that that generosity would be returned to me," she said, adding that it wasn't until she signed with her current label, Republic Records, that she saw that "generosity" returned.

As her career has gotten bigger and bigger, Swift has felt more of a responsibility to speak out against unfair industry policies in order to make things better for younger artists. "I’m one of the only people in the artist realm who can be loud about it," she reflected in Music Week. "People who are on their fifth, sixth or seventh album, we’re the only ones who can speak out, because new artists and producers and writers need to work."

It's just as the saying goes, with great power comes great responsibility.