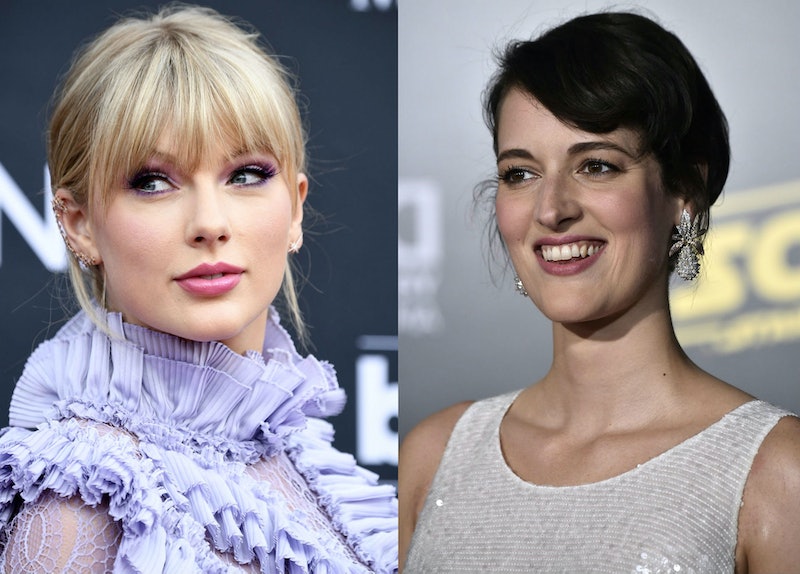 Here is some exciting news for Saturday Night Live fans. Taylor Swift and Phoebe Waller-Bridge are headlining SNL, NBC's sketch comedy show tweeted on Monday, Aug. 26. Yes, you read that correctly. The Killing Eve creator and Lover artist will appear together on Oct. 5 for the second episode of SNL's 45th season. It's hard to believe that the late-night series has been on for over 40 years, but there's no better way to celebrate than with Waller-Bridge hosting an episode with Swift as the musical guest.

As you can see below, Swift couldn't be happier to be appearing in the same episode with Waller-Bridge, a woman and talent she looks up to greatly. Shortly after the news broke, Swift tweeted, "Ever since I saw Fleabag, I’ve been all 'I can’t wait to see this woman host @nbcsnl' and it’s happening now + I get to be there too = I am in shambles."

Waller-Bridge has yet to make a statement about her SNL appearance and whether or not she too loves Swift. Whatever the case, there's no denying the "You Need to Calm Down" singer can't get enough of Waller-Bridge or her Amazon series, Fleabag.

In a May interview with Entertainment Weekly, Swift discussed her Waller-Bridge obsession. First, she spoke about the Emmy nominee's major success and talent. "I'm really, really obsessed with Phoebe Waller-Bridge and her writing. I love Fleabag. I just am so impressed by her body of work, her humor. What I love about is she makes you crack up laughing, shocks you, and breaks your heart all in the span of a few minutes in that show."

Swift didn't stop there, but also commented on Killing Eve starring Sandra Oh and Jodie Comer. "I’m just sort of obsessed with all things Killing Eve. I just watched the first episode of Season 2. Jodie Comer doing all those dialects is absolutely incredible to me. Also, I don’t think we’ve really seen such a lovable psychopath, where you really want to hang out with her but you should not. It’s amazing. Oh god, it’s so intoxicating."

The "ME!" musician continued about the BBC America series, "We've only ever seen that kind of endearing badness in men until recently, where we start to see female characters that are able to breakthrough that constant likability challenge we find ourselves in — where men are allowed to be bad but also, you know, wink, it’s very sexy."

In addition to Waller-Bridge and Swift, Woody Harrelson will host SNL on Sept. 28 with Billie Eilish as the musical performer. Stranger Things' David Harbour and Camila Cabello will appear together on Oct. 12. Kristen Stewart will host on Nov. 2 and Eddie Murphy will take on hosting duties as well on Dec. 21.

But, back to Swift and Waller-Bridge. Whenever the two artists first meet, there's a good chance Swift might become super emotional and who could blame her? Here's hoping Swift captures the moment and shares it on social media. Their SNL gig is definitely something to look forward to. Maybe they'll even star in a skit together? Now that would definitely leave Swift "in shambles" all over again.

More like this
Taylor Swift & Her Mom Clap Back Against The “Shake It Off” Plagiarism Lawsuit
By Jake Viswanath
Taylor Swift Wanted To Be In 'Twilight: New Moon,' According To Its Director
By Grace Wehniainen
Kanye West Has The Most Kanye Reaction To Kim Kardashian & Pete Davidson's Split
By Jake Viswanath
Kim Kardashian & Pete Davidson Reportedly Broke Up After Dating For 10 Months
By Grace Wehniainen
Get Even More From Bustle — Sign Up For The Newsletter