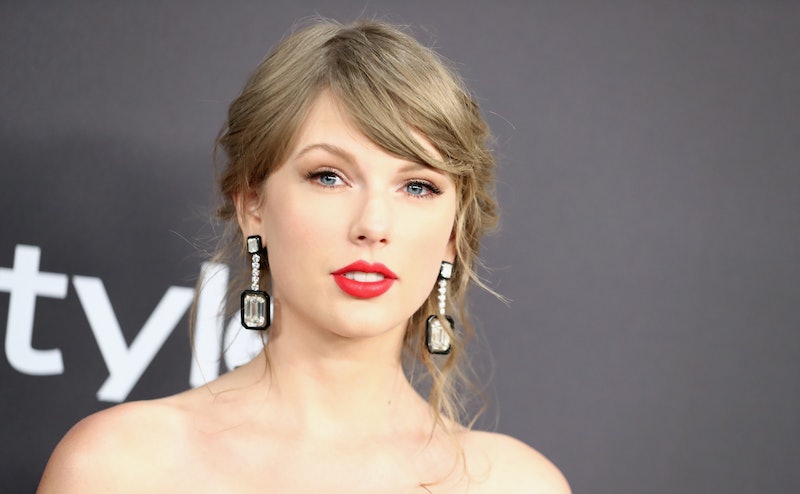 She swapped the 2019 Grammys for the BAFTAs — and for the sweetest reason. While many of her fans and domestic fashion watchers were hoping for a surprise and sartorial appearance at the Grammys, it didn't happen. However, Taylor Swift wore a Disney Princess-like dress for the 2019 BAFTAs. She looked stunning, as per usual. For reference, the BAFTAs are the UK equivalent of the Oscars.

The singer, whose Reputation album was nominated at the music industry prize-giving ceremony, has been in the UK filming Cats. She didn't hop a flight home to the U.S. to appear or perform at the Grammys, though. That's because she was instead supporting her boyfriend Joey Alwyn. Alwyn appears in The Favourite, which impressively picked up 7 BAFTA Awards.

According to Vogue UK, the singer nixed walking the red carpet but did attend the afterparty. She also hit Instagram to celebrate the film's success and to share a photo of her dress.

In the image, Swift was seated and wearing an angelic Stella McCartney dress. The dreamy, Cinderella-like dress featured a deep, plunging V and was an icy blue shade. It was an excellent and classic choice for winter. It was sooo Disney Princess, too.

The gown was also airy, whimsical, and elegant. Swift opted for an Old Hollywood glam hairstyle. She rocked a deep side part, finger waves, sideswept bangs and face-framing pieces. Her updo looked like a faux bob and she owned it. She didn't simply swap the Grammys for the BAFTAs. She also traded her signature, ruby red lip for something a little more pink.

Here's Alwyn at the BAFTAs, rocking a tux with a one-button jacket. Lookin' sharp, Joe. While it would have been uh-mazing to see them strut the carpet together, they are intensely (and understandably) private about their relationship.

Swift's BAFTAs dress was a marked difference from her 2019 Golden Globes gown. The singer wore a supremely sexy, black Atelier Versace frock. It was off-the-shoulder, sequined, and boasted a major slit. It seriously went up-to-there.

Swift's was one of several see-through dresses from this year's Globes. She elected a messy updo with a swipe o' scarlet on her lips.

Flashback to the 2016 Grammys, when Swift wore an orange bandeau top and hot pink skirt by Atelier Versace. This was the last time she attended the ceremony. So there has been quite a dearth of Taylor Swift Grammy appearances in the latter part of this decade.

Swift wore a teal Elle Saab gown to the 2015 ceremony. It was her version of the high-low hem. She also packed extra punch with those purple strappy heels.

Swift rocked a simple and short-sleeved, metallic Gucci column gown at the Grammys in 2014.

Swift looked every inch the goddess in this white J. Mendel gown at the 2013 ceremony. Her braided and banged updo gave off such a goddess vibe, too.

While T. Swizzle was missed by the music community at the 2019 Grammys, she dazzled at the BAFTAs.