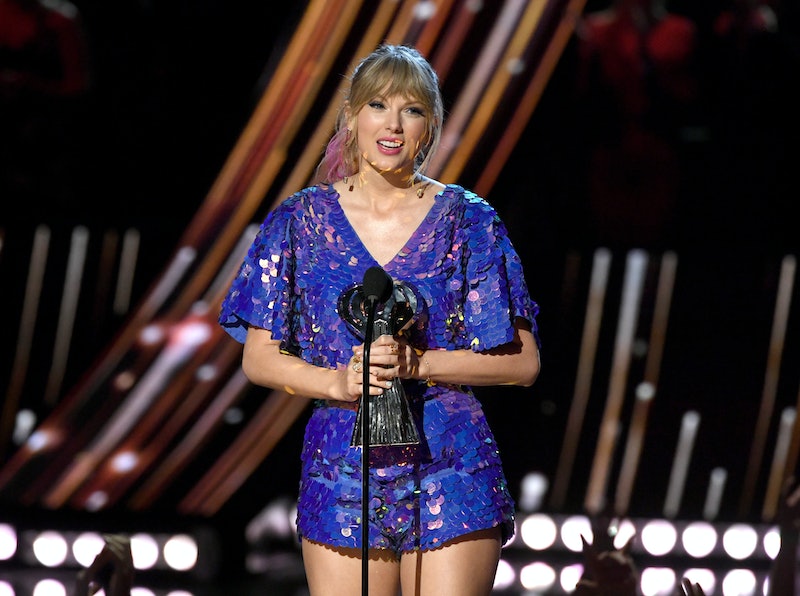 On Thursday, March 14, Taylor Swift made an appearance at the iHeartRadio Music Awards that had everybody talking — and it wasn't just her wins for Best Tour and Best Music Video that were getting attention. It seems that an interesting choice in footwear and accessories, along with a few other clues, has left many fans believing that Swift's new music may be about butterflies. And, to be honest, the evidence is kinda hard to deny.

Avid followers of the "Bad Blood" singer were quick to point out details from both the show and Swift's social media profiles, which alluded to the notion that her new project would, somehow, involve the beautiful winged insects. It seems that fan curiosity was peaked when Swift hit up the red carpet of the LA ceremony donning a iridescent sequin romper along with a pair of heels and a ring adored with butterfly motif.

Ahead of the show, Swift took to Instagram to share a photo of herself in a pair of sunglasses that featured a rainbow filter. In her caption, she teased fans about her upcoming appearance at the event, writing, "Due to the butterfly migration in Southern California maybe I’ll just stay outside until I head indoors for @iheartradio awards."

Two hours later, Swift posted the caption, "Bout to walk out on the @iheartradio carpet, thought I’d show you first" along with another photo which prominently showcased her wearing a pair of Sophia Webster butterfly heels.

In a third post, Swift shared an up close snapshot of the shoe's detailing — and boy, did Swifties take notice. Many of the singer's fans quickly jumped to Twitter to share their theories on what it all may mean and it seems that they've pretty much come to the conclusion that Swift will soon emerge with new butterfly-inspired music.

PopSugar editor Kristin Harris theorized that Swift's new album will prove to be an evolution for Swift. Just as a caterpillar becomes a butterfly, Swift is ready to go from Reputation to, well, whatever comes next.

Sharing similar sentiments about a possible "metamorphosis" for the singer, this commenter is seemingly convinced that Swift has a surprise album in the works.

Another Twitter fan surmised that the butterfly will become Swift's new theme after the snake/vengeance theme of her last album, Reputation.

4. Taylor Swift Is Ready To Fly

One fan suggested that Swift has totally taken on the butterfly persona.

One Swiftie feels that the entertainer has come full circle and has undergone a total "rebirth," going from a snake to a butterfly.

Another fan just wanted to know if Swift was still sticking with the palm tree theme she previously teased on Instagram.

Fans agreed, Swift is nothing short of butterfly royalty.

Entertainment Weekly writer Dana Schwartz had a serious question about the timing of LA's butterfly migration: was it all just an elaborate publicity stunt?

Meanwhile, this fan was totally down for this new Swift-butterfly movement.

Although the big night is over, it seems that Swift plans to keep the clues for new music coming following her iHeartRadio Awards appearance. On Friday, March 15, she gave fans yet another taste of her butterfly-themed mantra. Taking to Twitter, Swift wrote, "U can't make someone love you regardless how long you been with them or want them. If you truly love them, it's best to set them free like Butterflies..."

While it appears that new music may be on the horizon, Swift has remained coy when it comes to sharing any actual details about her prospective album. During her acceptance speech for Tour of the Year at the iHeartRadio Music Awards, Swift's had a message for fans who've been wondering about when she'll drop new music, promising, "When there's new music, you will be the first to know."

Though she continued to be vague about when new music will be released, it seems that fans couldn't be happier about Swift's latest butterfly obsession. Here's hoping some new music flies our way soon.