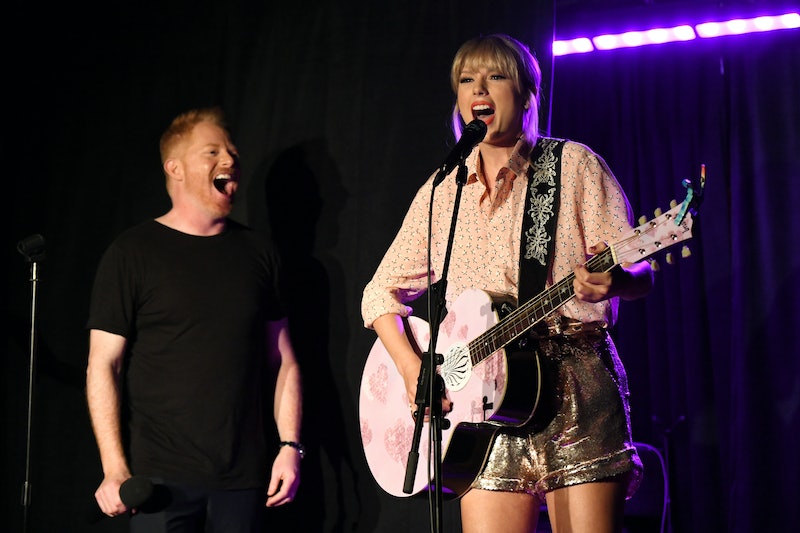 Taylor Swift's ongoing celebration of Pride and support for the LGBTQA+ community continued on Friday, June 14. Swift performed at a Pride celebration at Stonewall Inn in New York City in a surprise appearance at an event hosted by Modern Family star Jesse Tyler Ferguson. According to The Hollywood Reporter, the "You Need To Calm Down" singer told the crowd, "Thank you for having me Stonewall, and happy Pride!” Ferguson introduced her to the very excited crowd at the historic landmark and she told him that she heard his favorite karaoke song was her hit "Shake It Off." And then they proceeded to sing an acoustic duet of the 1989 single.

They sang the song on stage together as the crowd clapped and sang along. The location of this performance is, of course, extremely pivotal — Stonewall Inn was where the Stonewall Riots of 1969 occurred and it's considered a huge turning point in the modern LGBTQA+ civil rights movement in the United States; 2019 marks the 50th anniversary of the Stonewall Riots.

After the performance, Ferguson thanked Swift via Twitter for attending the event and for her support of the LGBTQA+ community. The actor wrote in the tweet:

I’m so happy I don’t have to keep this secret any longer. Look who came to celebrate the 50th anniversary of Stonewall at the Stonewall Inn. @taylorswift13, you are a gem. Thank you for everything you do for the LGBTQ community. We [heart emoji] you! [rainbow emoji]

Swift's surprise performance occurred not even a full day after the release of her new single "You Need To Calm Down," dropped on Friday at midnight. The track from her new album Lover has lyrics that show her support LGBTQA+ rights, references GLAAD (Gay & Lesbian Alliance Against Defamation), and has a distinctly direct message aimed at people who are homophobic (You just need to take several seats and then try to restore the peace / And control your urges to scream about the people you hate / 'Cause shade never made anybody less gay).

Later in the day, TMZ and E! News reported that the new tune's release inspired a major influx of donations to GLAAD. Anthony Ramos, Director of Talent Engagement at GLAAD, issued the following statement to E! regarding the donations:

"Taylor Swift is one of the world's biggest pop stars. The fact that she continues to use her platform and music to support the LGBTQ community and the Equality Act is a true sign of being an ally. 'You Need to Calm Down' is the perfect Pride anthem, and we're thrilled to see Taylor standing with the LGBTQ community to promote inclusivity, equality, and acceptance this Pride month."

Swift began Pride Month by sharing a letter to Tennessee Senator Lamar Alexander with her fans. In the letter, the singer urges him and her fanbase to support the Equality Act, a bill which would prohibit discrimination based on sexual orientation and gender identity.

And Swift has continued to be vocal about her support for the LGBTQA+ community since through her music — and perhaps her upcoming new album, Lover, too.