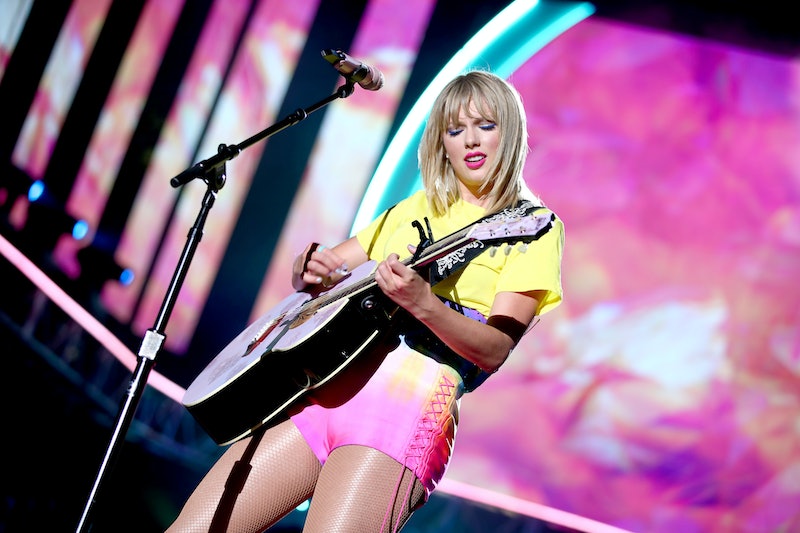 "You need to calm down. You’re being too loud." Taylor Swift’s “You Need to Calm Down” lyrics and video celebrate LGBTQ pride in so many ways. The new single, which dropped at midnight on Thursday, June 13, hails from Swift’s upcoming seventh studio album Lover, slated for an August 23 release ( as many fans have obsessively noted, the date numbers eight, two, and three add up to the pop star’s favorite number, 13).

Swift, who has recently dipped her toe in the political pool during the 2018 midterm elections, has been vocal about her support for LGBTQ rights. To kick off Pride Month in June, the singer penned a letter to Tennessee Senator Lamar Alexander that urged him to support the Equality Act, a bill that seeks to prohibit discrimination based on sexual orientation and gender identity. In the letter shared to her followers, Swift called on the senator to “think about the lives you could change for the better if you were to vote to support the Equality Act in the Senate and prohibit this harsh and unfair discrimination.” And after starting off Pride Month with action, Swift is continuing the celebration with her new album and single.

On Thursday, the singer took to Instagram to tease Lover’s album art, which features the singer against the backdrop of pastel clouds as the word “lover” is calligraphed in pink glitter. A few hours later, the singer dropped “You Need to Calm Down,” and the song's message is all about love, and the right to love whoever you choose.

And, on the heels of the single’s release, fans have pointed out a myriad of ways that the colorful "You Need to Calm Down" lyrics video references LGBTQ pride.

Taylor Swift's “You Need to Calm Down” is already being labeled a pride anthem. And the lyric video is laden with bright, colorful hues — a likely reference to the rainbow flag, which serves as the symbol of LGBTQ pride. Along with these color references, there are also compelling lyrics that directly or indirectly reference the community:

“Shade never made anybody less gay”

“Sunshine on the street at the parade, but you would rather be in the dark ages, making that sign, must’ve taken all night”

“Control your urges to scream about the people you hate”

“You need to just stop, like can you just not, step on his gown”

Billy Porter and his iconic red carpet gowns would definitely approve of this gender-roles-busting message.

“You Need to Calm Down” Supports GLAAD

GLAAD’s (short for the Gay & Lesbian Alliance Against Defamation) reference in “You Need to Calm Down” is straightforward at best. With the lyrics clearly written out in the video as, “Why are you mad? When you could be GLAAD?,” Swift manages to seamlessly tie in support for the organization without straying too far from the overall theme of the song.

“You Need to Calm Down” Supports the Equality Act

Perhaps the Equality Act reference is a bit more subtle than the GLAAD reference, but still, it's obvious once you see it. The "You Need to Calm Down" lyrics video supports the Equality Act through various word play in the spelling of the words "seats," "peace," and "scream." In these words, the letters "e" and "a" are presented in different shades from the rest, which serves as a likely reference to the bill that Swift has used her platform to advocate for.

Look what you made her do. Homophobia? Sorry, Taylor can’t come to the phone right now, she's too busy singing "You Need To Calm Down" and advocating for equal rights for all.

More like this
Twitter Is At Odds Over Taylor Swift’s Possible ‘All Too Well’ Oscar Run
By Brad Witter
Christina Aguilera Took A Powerful Stand At Brighton Pride
By Sam Ramsden
Taylor Swift & Her Mom Clap Back Against The “Shake It Off” Plagiarism Lawsuit
By Jake Viswanath
Lauv Is No Stranger To Taylor Swift, Drake, Ed Sheeran, & Fame
By Alyssa Lapid
Get Even More From Bustle — Sign Up For The Newsletter