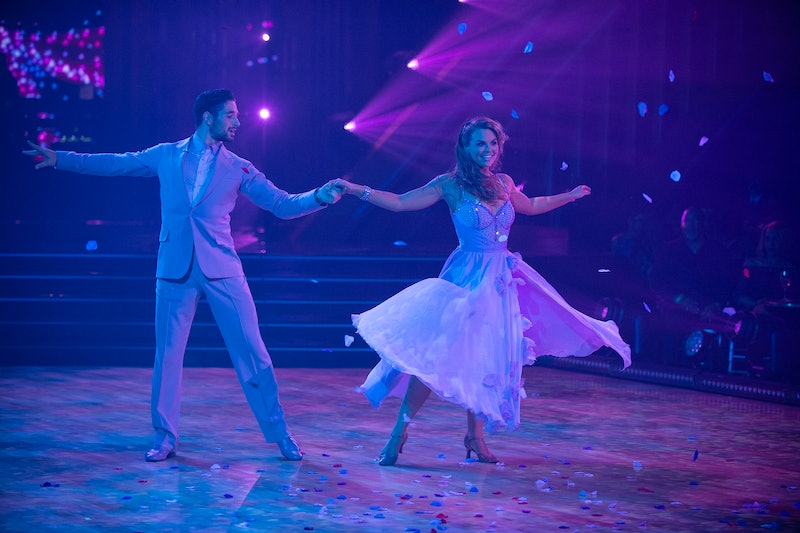 There are very few birthday gifts quite like earning a shoutout from one of the biggest pop stars in the world — just ask Hannah Brown. The former Bachelorette performed a waltz on this week's Dancing With the Stars that earned praise from more than just the judges, as Taylor Swift's reaction to Hannah's "Lover" dance was the best birthday present she received.

Hannah and her partner, Alan Bersten, earned the week's highest score — a 24/30 — on Monday's episode of DWTS, with their romantic Viennese waltz to Swift's latest single. The following day, the singer herself praised the couple and their routine, sharing a clip on her Instagram Story and gushing to all of her followers that she "loved watching @hannahbrown dancing to "Lover" on DWTS." She also added that "this performance is so pretty and twirly," before sharing a second clip, punctuated by a gif of herself clapping in approval.

Hannah reposted Swift's praise on her own Instagram Story, calling it was the best gift she could have possibly gotten on her birthday — she turned 25 on Sept. 24. "Well. My birthday has been made," the Alabama native wrote, thanking Swift with a cute "xoxo." In another post on Instagram earlier that week, Hannah joked that her "Lover" performance earned her, "the best score for my last night as 24," cementing the waltz as a sentimental moment in her life.

Even before Swift gave her the ultimate birthday present, Hannah credited her high-scoring performance in the waltz to her love of the singer and her music. "As a Swiftie, I was really feelin' it," Hannah told Entertainment Tonight after leaving the dance floor. "Maybe that's why I feel like I did good!"

In another conversation with E! News, Hannah admitted that she has been listening to Lover during her DWTS warm ups. "I love Taylor Swift, and I have been jamming to her new album all the time," she said, before adding that she would be "really happy" of the singer saw the performance. "I hope she likes it! Taylor, let me know if you like it!" she gushed — and her big birthday wish came true not long afterwards.

The Alabama native has often gushed about being a fan of Swift's on social media; in June, she shared a snap with the singer from Wango Tango, explaining in the caption that she "lived my best life last night," by getting to see Swift from the front row. Two months later, Hannah posted another picture with Swift on Instagram, this time from the singer's Good Morning America performance. "Sure, I photo bombed this..." Hannah wrote alongside the sweet group photo. "But come on it’s @taylorswift, @tiffanyhaddish, and the gma girl squad. No chill needed."

In addition to earning Swift's seal of approval, Hannah was cheered on during her pre-birthday performance by some of her fellow members of Bachelor Nation, including ex Colton Underwood and host Chris Harrison. "You're supposed to perform, but not really see anybody in the audience [when you dance]," she told ET about having Bachelor Nation in the audience for her "Lover" waltz.

"I made direct eye contact with Chris Harrison when I did this one move, and I was like, 'Oh my gosh!' But it was really good to see all the support that I have been getting from Bachelor Nation and my people." With support from her Bachelorette family and now Taylor Swift herself, it seems like Hannah has plenty of fans cheering her on as she attempts to take home that Mirrorball trophy.