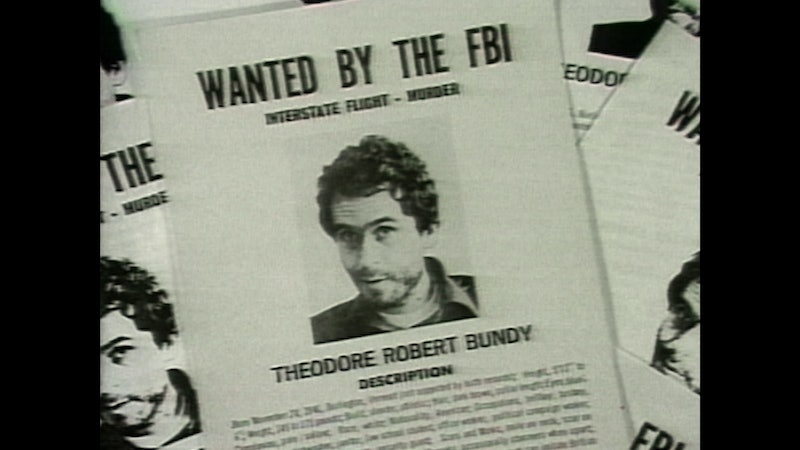 In Netflix's new docuseries, Conversations With A Killer, notorious serial killer Ted Bundy comes back into the spotlight, and so does the vehicle he used to roam the streets looking for victims. The documentary features interviews with Bundy himself, gleaned from hours and hours of audio recorded by journalists before his execution in 1989, and they're just one of the ways true crime fanatics can get closer to his infamous story. As it turns out, Ted Bundy's car is displayed in a museum in Pigeon Forge, Tennessee.

The Volkswagen Beetle resides at the Alcatraz East Crime Museum, which also houses O.J. Simpson's White Ford Bronco and exhibits on things like crime scene investigation methods and the history of American crime. According to the Knoxville News, the car has been in the museum since 2016. The Bundy exhibit also includes handwritten letters and a radio the killer — suspected of killing as many as 100 women — kept in prison, the piece states.

According to the Crime Museum in Washington, D.C., which appears to be affiliated with Alcatraz East, authorities found plenty of evidence condemning Bundy inside the car. Hairs matching three potential victims were reportedly found initially, and that was enough to put Bundy in prison for alleged aggravated kidnapping. Later, the site continues, new hairs were reportedly discovered in the backseat, and blood was found under the door panel, which lead to more charges against Bundy.

Given that Bundy's Volkswagen represents the violent deaths of so many young women, it's unquestionably a morbid and heartbreaking attraction. It's worth asking why these disturbing types of artifacts are so fascinating to people, and why exactly we'd want to see something like this in the first place.

Jean Murley, author of "The Rise of True Crime: 20th-Century Murder and American Popular Culture," told The Guardian that fascination in true crime has moved into the mainstream much more in recent years. "It hasn’t necessarily become highbrow entertainment, but it has a lot more cultural cache," she said. "People aren’t ashamed of liking it the way they were 10 years ago." And there are supposed explanations for the desire to consume true crime — Scott Bonn, a criminology expert, told NBC News that fascination with true crime can be explained by our desire to seek adrenaline, to somehow make sense of senseless crimes, or even to learn how to better survive dangerous situations ourselves.

On the flip side, Huffington Post contributor Molly Fosco wrote about the moral implications of consuming true crime content — specifically in TV and movie format — and what it means to turn these horrific stories into forms of entertainment. "These families suffered the death of a loved one at the hands of a violent crime and we’re sitting on our couches binge-watching the details and passing judgment on who the villains and heroes are as if they don’t exist in the real world," Fosco wrote. "Do filmmakers have a moral obligation not to make documentaries about violent criminals and their victims?"

The same questions could potentially be posed about these artifacts once owned by Bundy — so many lives were ruined by this man, so isn't it kind of gross to spend a free afternoon leisurely ogling his belongings? But Alcatraz East's website says the stories and items at the center of infamous crimes have historical value: "While some may feign horror at the idea of killers in a museum, criminal events are a sad reality of the world we live in and should not be ignored. While they are unquestionably tragic, out of these events comes an awareness that sparks change, institutes laws, and rallies action."

There's no solid answer to these kinds of moral dilemmas surrounding true crime. Most of us, at some point, are guilty of being intrigued by the stories and artifacts borne out of tragic events. But whether you're checking out Ted Bundy's Volkswagen or flipping on the TV for an episode of the latest documentary craze, the real lives ruined should never be forgotten.