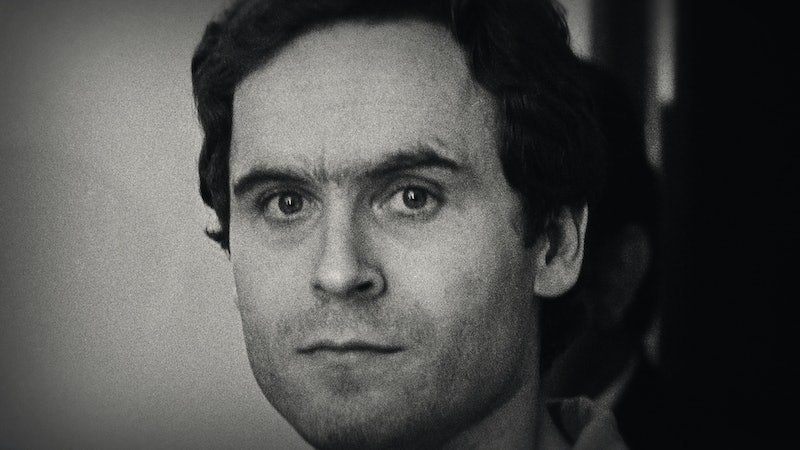 Netflix is dedicating four episodes to the life and murders of Ted Bundy in the new true crime series Conversations with a Killer: The Ted Bundy Tapes. Premiering on Jan. 24, the episodes chronicle his early years up through his execution after having been convicted of murdering several women. (As the finale shows, Bundy eventually confessed to upwards of 30 murders, but officials speculate there could be more.) But the series also briefly touches on Bundy's marriage and resulting family, and it's an interesting (for lack of a better word) aspect to his story. What some people might not know is that Ted Bundy's daughter Rose was conceived while Bundy was on death row.

As seen in the series, Bundy was often described by the media as charming and handsome, and many young women admirers attended his court proceedings where he was on trial for murdering young women. But his longtime friend Carole Boone was more than an admirer. As Oxygen reported, according to the book The Only Living Witness: The True Story of Serial Sex Killer Ted Bundy, Boone and Bundy had initially met while working together at the Washington State Department of Emergency Services.

The two stayed in touch via letter-writing, and when Bundy was later put on trial in Florida, Boone moved to the area, according to The Sun. The Netflix series shows that she attended his court proceedings and was a close confidant. During a trial to determine whether Bundy would receive the death penalty, Bundy called Boone to the witness stand and asked her to marry him in front of the judge.

Despite the interruption of court proceedings, the jury did eventually recommend that Bundy be given the death penalty.

Sometime after their marriage, Boone became pregnant, per The Deseret News. She listed Bundy as the father of their daughter Rose, even though conjugal visits were prohibited on death row. "It's nobody's business," Boone said of the pregnancy, per The Deseret News. But the Netflix series has audio of her elaborating on how she and Bundy got that alone time. "They just, they didn't care," Boone claimed of the guards. "They walked in on us a couple of times."

Rose was born in 1982, per Oxygen. That would make her around 36 today. But nothing is known about her current whereabouts or about Boone's. According to Oxygen, the book The Stranger Beside Me reported that Boone divorced Bundy before his 1989 execution. The book was written by Ann Rule, a friend of Bundy's from his Washington days.

Rule wrote that she specifically avoided finding out where Rose and Boone were, because she never wanted to be accidentally responsible with leading the media to them. "I have heard that Ted's daughter is a kind and intelligent young woman, but I have no idea where she and her mother may live," Rule wrote. "They have been through enough pain."

Rose has clearly actively avoided being known to today's world, and people need to respect that. If she ever comes forward on her own, that's up to her. But in the meantime, she's a private citizen who deserves her privacy and our respect.