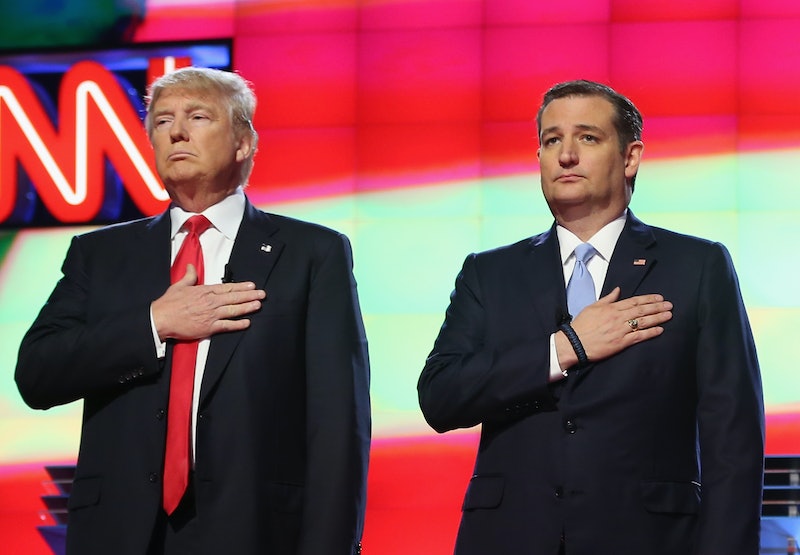 In an interview with ABC's This Week, Texas Sen. Ted Cruz responded that Trump "is the president" when he was asked whether the the president was his friend or foe. Cruz's reluctance to define his relationship with the president in either negative or positive terms comes as Trump prepares to head down to Texas to stump for the senator's reelection.

“He’s the president. I work with the president in delivering on our promises,” Cruz said when asked how he would describe his relationship with Trump, according to video shared to Twitter. “What I told the president the week after the election, I said, ‘Mr. President, I want to do everything humanly possible to roll up my sleeves and lead the fight in the Senate to deliver on our promises.’”

Cruz is running for reelection in Texas, where he is facing Democratic challenger Beto O'Rourke in an election showdown that by and large has the entire country's attention. Cruz has long been a highly visible senator, especially since his failed bid for the presidency during the 2016 election, where he frequently squared off against then-candidate Trump. During that election, Trump nicknamed Cruz "Lyin' Ted," and the two frequently sparred in public, be it at a debate or in the press.

There were many incredibly combative moments between Cruz and Trump during the 2016 election. One time, for example, Trump suggested that Cruz's father may have been involved in the assassination of President John F. Kennedy, claiming that Cruz's father was with Lee Harvey Oswald shortly before the shooting. The accusation referred to a photo published by a tabloid. (The Cruz campaign denied that this was true.)

Over time, Trump also attacked Cruz's Evangelical faith via tweet, and said, per The Washington Post, that he would not accept Cruz's endorsement for the presidency if he were to offer it. Cruz ultimately declined to offer his support until nearly the final hour of the Trump campaign.

The drama was not one-sided; Cruz took his share of swipes right back at Trump. He described Trump as "a sniveling coward," ''a pathological liar," "utterly amoral," and "a serial philanderer," according to The Chicago Tribune.

As it stands right now, Democrats and Republicans are fiercely fighting over the November midterms. In many ways, the elections are being cast as a referendum on Trump's presidency. But even if Trump were taken out of the equation, much is at stake for either party insofar as control of Congress is concerned. While Republicans remain determined to hold on to their majority control in both houses, Democrats are battling to upend the current power dynamic. If Democrats took over either the House or the Senate, the Trump administration could face significant challenges with regard to pushing its agenda forward.

All of the campaign exchanges between Trump and the senator, as well as the upcoming midterms, provide the backdrop for the question ABC posed to Cruz regarding his current standing with the president. While sitting Republicans and Democrats by and large tend to support candidates for office within their respective parties, Cruz and Trump have a particularly tumultuous history. And as has long been the case with Trump, adhering to norms is not guaranteed.

More like this
A Political Thriller Inspired By The Munich Massacre Is Coming Soon
By Darshita Goyal
Why Eurovision 2023's Host City Won’t Be Revealed For A While Yet
By Sam Ramsden and Rachel Mantock
Are John Legend & Kanye West Still Friends? The Singer’s Latest Update Is Candid
By Brad Witter
Kendall Jenner & Devin Booker Have Seemingly Reconciled Just Weeks After Split
By Jordyn Tilchen
Get Even More From Bustle — Sign Up For The Newsletter