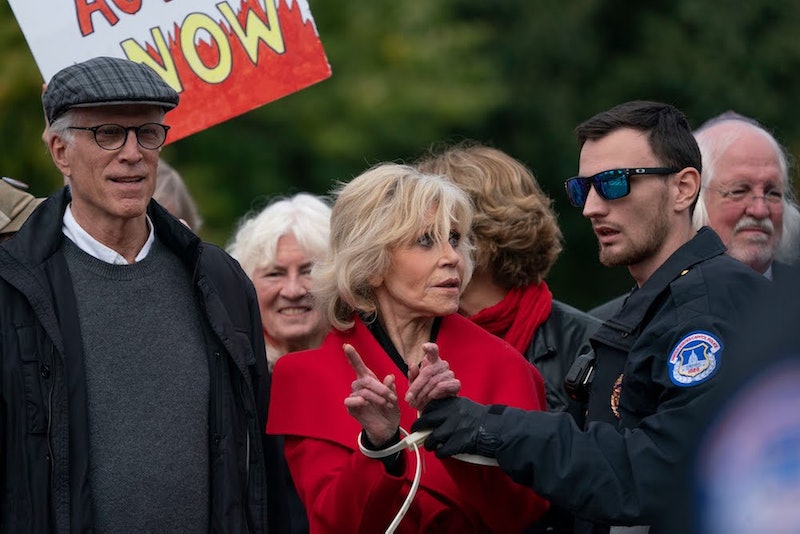 As residents of The Good Place might say, holy mother forking shirtballs. Ted Danson was arrested during a climate change protest with Jane Fonda on Friday, Oct. 25. The Good Place star was arrested by U.S. Capitol Police outside of the Capitol Building in Washington D.C. while participating in Fonda’s Fire Drill Fridays. It's a campaign in which the Grace and Frankie star convenes at the U.S. Capitol every Friday to bring attention to the climate crisis.

In a statement released to Bustle, Capitol Police confirmed that 32 individuals were arrested for unlawful demonstration and charged with “crowding, obstructing or incommoding,” but did not confirm by name that Danson and Fonda were among those arrested. Friday’s protest called for the protection and restoration of the oceans, according to Fire Drill Fridays’ tweet shared on Oct. 25.

On Twitter on Friday, Washington Post reporter Hannah Jewell shared a clip of Danson as he's placed in plastic handcuffs while onlookers cheer on the veteran actor. Jewell added in a follow-up tweet that Danson also “shared a little handcuffed high five" with Fonda, who was similarly placed in handcuffs and arrested for the third time in the third week of her climate change campaign.

Fonda launched Fire Drill Fridays in an effort to demand action on the climate emergency. Fonda noted on the campaign’s website that she moved to DC “to be closer to the epicenter of the fight for our climate,' citing climate activist Greta Thunberg, Reverend William Barber, and activist Randall Robinson as her influences. She added, “I can no longer stand by and let our elected officials ignore — and even worse — empower — the industries that are destroying our planet for profit.”

On social media, Danson’s Good Place co-stars D'Arcy Carden and Kristen Bell joined the chorus of fans supporting the actor in his arrest. Carden wrote alongside a photo of Danson’s arrest on Instagram, “oh my GOD I love this man. Thank you @teddanson!!! 💙💙💙💙💙” Bell added in a repost of Carden’s Instagram, “There is [no one] better than @teddanson.”

Danson isn’t the first Hollywood veteran to be arrested for his role in the climate fight. Fonda’s Grace and Frankie co-star Sam Waterston joined the protest during the second week of Fire Drill Fridays on Oct. 18, where he and Fonda were similarly carted away in handcuffs and charged with “crowding and obstructing,” as per the Hollywood Reporter.

Between Waterston and Danson, there’s no telling which Hollywood veteran will join Fonda’s fight against climate change next week.