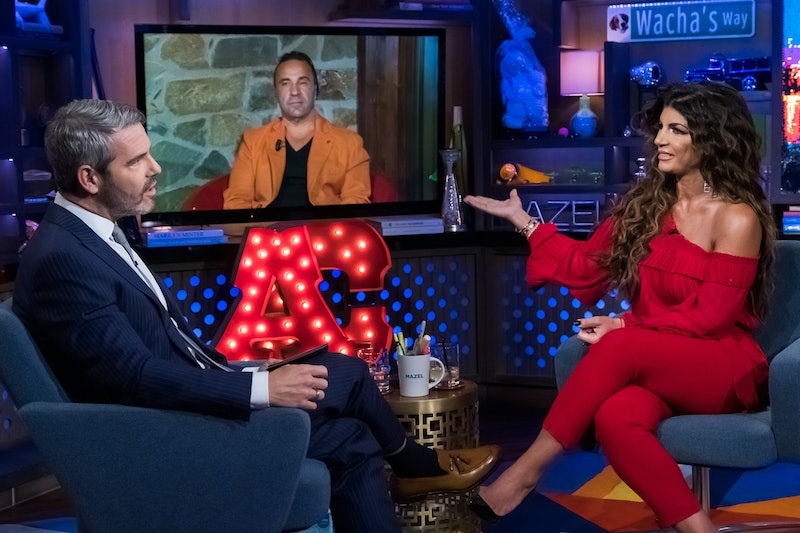 Real Housewives of New Jersey fans may want to grab a tissue right now — Teresa and Joe Giudice have finally reunited in Italy. On Thursday, Nov. 6, the RHONJ stars' eldest daughter Gia Giudice shared a photo confirming that Teresa and her daughters are currently visiting Joe in Italy, marking a highly anticipated reunion for both the once tight-knit family and Bravo fans everywhere.

Teresa and Joe's daughters Gabriella, Milania, and Audriana also joined in on the family photo, which Gia captioned, "We're back." Fans previously became aware that the Giudice family was headed to Italy when Gia posted videos from John F. Kennedy International Airport to her Instagram Story on Wednesday, Nov. 6, as reported by People.

Joe has been living in his native Italy for the past few weeks as he awaits his final deportation ruling. He began a 41-month prison sentence for mail, wire, and bankruptcy fraud in March 2016, after Teresa served 11 months for the same crimes. Upon his release in March 2019, Joe was immediately held in the custody of Immigration and Customs Enforcement as he appealed his impending deportation.

His petition to be released to his family was denied, but a request to wait for his ruling in Italy rather than ICE custody was granted, and he was released in October 2019. A final verdict on whether he will be deported from the U.S. is expected in November.

The family reunion will be captured by Bravo cameras for a RHONJ special, as Andy Cohen confirmed during Teresa and Joe's explosive interview on Oct. 27. The special, entitled Joe and Teresa: Unlocked, marked Joe's first television interview since being freed from custody. And while the reunion seems sweet on the surface, it will actually mark a major turning point in the couple's relationship.

During the interview, Teresa and Joe told Andy that they would wait to see each other before deciding on the future of their marriage, after admitting that they've both changed while spending time apart. “I’m waiting until I get there to see if I feel differently,” Teresa revealed. “I just feel like when you live apart. … He says the same thing, when he sees me, he may not want this either. We’ll know when we see each other.”

While Teresa previously said in 2018 that she'd be open to living in Italy should Joe get deported, she has since changed her tune, saying that she would likely divorce Joe if he is deported as she doesn't want to uproot her and her children's lives to Italy. “If we stay together, we stay together. If we don’t, we don’t,” Joe said. “As long as she’s happy, that’s all that really matters. I’m not going to tell her what to do. If she doesn’t feel like she wants to be with me anymore, then that’s the thing to do.”

Regardless of whether Teresa and Joe stay together or go their separate ways, fans will definitely shed a tear at their tumultuous journey when the family reunion airs sometime in 2020. And if you can't wait to get your Giudice fix, RHONJ Season 10 is currently airing on Bravo. Get both the popcorn and the tissues ready.