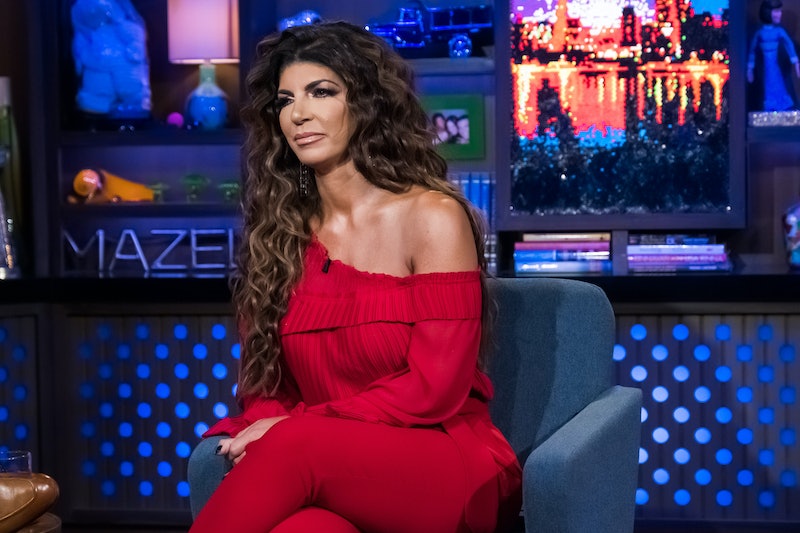 Teresa and Joe Giudice's relationship on Real Housewives of New Jersey was always somewhat dramatic, and it sounds like it's about to get even more complicated. According to a new interview, Teresa and Joe Giudice's relationship is still in flux after their highly anticipated reunion in Italy. As she told People on Thursday, Nov. 14, they don't know what their marriage looks like right now.

In the new interview, Teresa opened up about the trip that she took with her daughters to Italy, where Joe is currently residing as he awaits the final verdict of his deportation appeal, which will determine if he can return to the USA, where he grew up, or if Joe must remain in Italy for good. “It was really great to reunite with Joe and see how happy the girls were to see their dad,” she told the magazine.

That said, the focus on their children meant that they ended up not making a decision about their own relationship. “It was all about the girls, and we just had the best time with them, and that’s it," she explained. "We’re just going to take it day by day and see what happens." Teresa added that she and her daughters were only in Italy for two and a half days — definitely not enough time to make such a huge decision. "But our daughters are the most important thing," she said.

Teresa also sat down for an interview with ABC News' Paula Faris, which aired on Thursday's episode of Good Morning America. During the chat, she confirmed that no decision has been made about her and Joe's future. In other words, she isn't planning to file for divorce anytime soon, but whether they can stay together and find happiness with each other again is "to be determined," especially if Joe was forced to stay in Italy. "Imagine he lived in Italy and you lived here," she said. "I don't know if that's, like, a feasible relationship."

Joe was released from federal prison in March 2019 after serving a 41-month sentence for mail, wire, and bankruptcy fraud, but was quickly transferred to an immigration detention center as he appealed his deportation. Although he has lived in the U.S. since he was a child, he never obtained citizenship in the country, hence the deportation ruling, which he has now appealed twice. A final verdict is expected next year.

At the end of the day, however, Teresa made it clear that she will always have love for Joe, whether they remain together or split up. "There's always going to be a place in my heart for Joe," she said on Good Morning America. "I'm always gonna love him, no matter what."

More like this
RHOP’s Robyn Dixon Explained Why Juan Paid For Another Woman's Hotel Room
By Brad Witter
'RHOP' Stars Robyn & Juan Reportedly Got Remarried & Filmed The Ceremony
By Brad Witter
Molly-Mae & Tommy Fury Revealed Their Baby Girl's "Really Unusual" Name
By Sophie McEvoy and Sam Ramsden
Shaq Might've Spoiled His Relationship Status With Kirsten After 'MAFS'
By Brad Witter
Get Even More From Bustle — Sign Up For The Newsletter
From hair trends to relationship advice, our daily newsletter has everything you need to sound like a person who’s on TikTok, even if you aren’t.