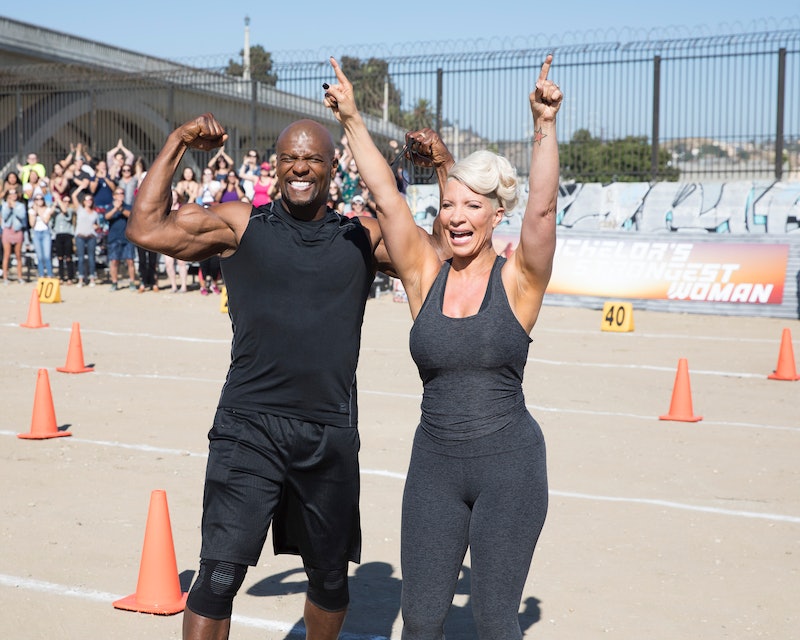 Celebrity guests abound this season on The Bachelorette, and there are a couple more coming down the pike who could teach Colton and the women a thing or two about love. When Terry Crews and his wife, Rebecca King-Crews show up, they're likely to give some words of wisdom to guide the group in their journey toward love. According to BroadwayWorld.com, the Crews duo will be assisting in a special fitness-themed date, but that's not all the knowledge they have up their sleeves.

Fans know Crews from his many acting credits — he's currently one of the hilarious stars of Brooklyn Nine-Nine, and has made a name for himself in everything from The Expendables series and Everybody Hates Chris to a new hosting gig on America's Got Talent. He's also a former NFL player who was first scooped up by the Los Angeles Rams in the 11th round of the 1991 Draft.

King-Crews was by his side the entire time, and also has a music career of her own. The two are always posting adorable photos with each other on Instagram, and after decades of cultivating a lasting relationship, there's definitely plenty that Bachelor Nation could learn from them.

Let's take a look at the timeline of Crews' and King-Crews' life together.

The couple hasn't spoken much publicly about their dating years, other than a few comments her and there. King-Crews recently told E! News that at first, it didn't seem like they'd ever become more than friends. "He almost got stuck in the friend zone," she told E! News. "He was a little too nice." Luckily for everyone, that didn't happen.

Crews and King-Crews wed nearly 30 years ago, and the throwback photos the two have shared are pretty amazing. Crews said in the caption for the above photo that he was just 20 years old when the ceremony happened. "I knew I had found the one," he wrote.

The Next Couple Decades — Building A Family

Though ages of all the Crews children are a little unclear other than some birthday posts, the couple are parents of five — Naomi, Azriel, Tera, Wynfrey, and Isaiah, according to Us Weekly. They also told the outlet in 2016 that they wanted to eventually adopt a sixth.

2015 — They Go Public With Relationship Maintenance

Crews told the Huffington Post that he and King-Crews took interesting methods to ensure they remained close both physically and emotionally. “90 days — no sex, all relationship, all talk, all cuddle,” he said. “I found that at the end of that 90 days ... I knew who she was, and it wasn’t about ‘Let’s go out because I know I’m gonna get some sex later.’ It was like, ‘Let’s go because I want to talk to you. I want to know you.'"

They know how to keep romance alive! Crews shared this series of photos from their international trip celebrating honeymoon number two.

2016 — Cooking Together For Charity

As if this couple wasn't talented and ambitious enough, in 2016 they also competed together on a special edition of Masterchef: Celebrity Showdown.

Crews first alleged on Twitter that he was sexually assaulted in front of his wife by a "high level Hollywood executive" while at an event in 2016. In the time since going public with his experiences, Crews has become a face for male victims of sexual assault and has worked to normalize men coming forward in this realm. King-Crews has publicly voiced support for her husband, and has appeared in interviews backing up his account of the events. "We’re Wonder Woman and Superman," she told Dr. Phil, per IndieWire. "Bring it on."

2019 — They're Looking Happy As Ever At The Golden Globes

Crews and King-Crews are a perfect example of a couple who doesn't pretend that their relationship is always flawless. They're quick to admit the bumps in the road, but they're also ready to bounce back and put the effort in. That's the kind of dedication it takes to maintain a nearly 30-year marriage, and hopefully it's the kind of attitude they can instill in Colton and the contestants when they appear on The Bachelor.