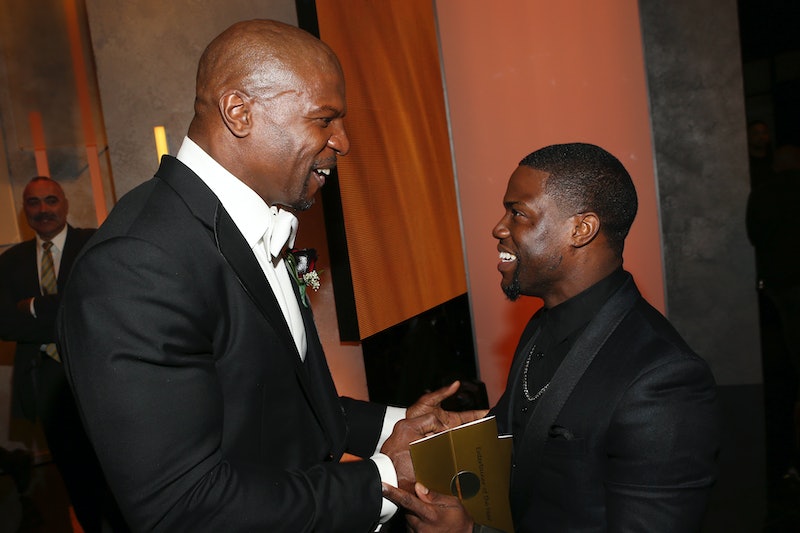 That's what friends are for. Terry Crews' comments about Kevin Hart during a Jan. 10 BuzzFeed News interview emphasized the importance of his longtime pal — and men, in general — taking accountability for their actions. Revealing that Hart "feels like he's being attacked" in light of resurfaced past homophobic tweets that lead to the comedian stepping down from hosting the 2019 Academy Awards, Crews gave some constructive insight:

"The truth is, Kevin, you're not being attacked. The truth is you have to just acknowledge what went on and acknowledge the pain of other people. That’s all anybody's asking for. That's it."

The Brooklyn Nine-Nine actor did, however, try to put himself in Hart's shoes to understand his friend's defensive reaction. He ultimately conceded that Hart "is right to feel the way he feels." During the sit-down on Buzzfeed News' live Twitter morning show, AM to DM, Crews further explained his stance by using the example of feeling attacked and, thus getting defensive, during conflicts with his wife, Rebecca King-Crews — even if he's in the wrong.

"People do make you feel that way ... then all of a sudden, you can get hardened," he said. "The hard part is when you put down the defenses and you say, "wait a minute, I'm not listening." Even if you don't agree, you have to respect and know what another person is feeling is different."

Crews' advice could almost certainly be beneficial to the Night School, actor, who's fumbled somewhat with expressing his regrets. Hart initially refused to apologize for his tweets altogether, explaining in an Instagram video that he'd already done so in the past and was standing his ground when faced with what he called an "ultimatum" from the Academy. Since then, Hart has restated his apology to the LGBTQ+ community for his "insensitive words," but many have criticized his reaction as being far from contrite.

During a Jan. 9 appearance on Good Morning America, Hart dodged host Michael Strahan's questions about the controversy, consistently repeating the phrase, "I'm over it." When pressed by Strahan to address critics or at least acknowledge the affect his past comments could have had on LGBTQ+ youth, Hart responded that he'd already said all he could possibly say on the subject: "I'm done with it. It gets no more energy from me. That's why I said, for the last time, I'm addressing this ... What else do you want? You want blood? You want my arms?"

Hart has had several fellow celebs in his corner through the scrutiny, too. As she revealed while interviewing Hart for the Jan. 4 episode of her daytime talk show, Ellen DeGeneres called the Academy to reinstate Hart. "You have grown, you have apologized, you're apologizing again right now. You've done it. Don't let those people win, host the Oscars," she told Hart on The Ellen DeGeneres Show.

Even Crews told the Associated Press in December that he respected Hart's decision to give up the hosting gig.

“I’m thankful that he acknowledged things that maybe weren’t right, and he’ll come back from this,” he shared with the AP on the red carpet of a GQ event in Los Angeles. “We do have to admit our guilt and say, ‘Hey I messed up and let’s fix this thing.’ I think that he will do that, and he has always done that. He's been an incredible person, very honest ... and, again, one of the funniest people on earth, still. So nothing can take away his talent. Period.”

While no one is questioning Hart's comedy chops, it's clear from Crews' comments that a little accountability could go a long way.

More like this
Pro Footballer Zander Murray Is "Blown Away" By Support After Coming Out
By Sam Ramsden
Bimini, Tia Kofi & More React To Cherry Valentine’s Death
By Catharina Cheung
An Honest Review of MeUndies Boxers, According To A Non-Binary Person
By Megan Lasher
The 19 Best Tweets & Memes About Bisexual Awareness Week
By Lexi Inks
Get Even More From Bustle — Sign Up For The Newsletter