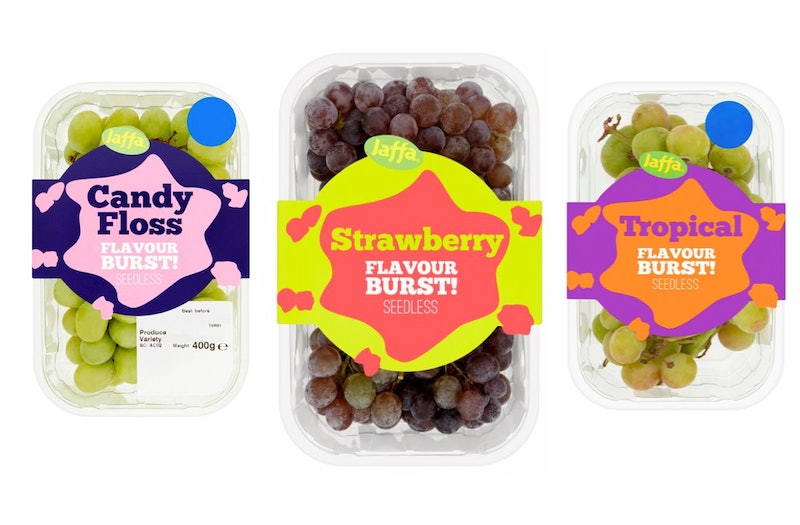 What's not to love about fruit? Natural, healthy, unprocessed. There to give you lots of lovely plant based fibre while also being tasty AF. However, for some people — that might not be quite enough. In light of this, some new developments have been made that might make people lean into fruit consumption. Tesco are selling flavoured grapes. Flavours that are erring on the, erm, whacky side. And TBH, I just don't know how I feel about it.

The grapes are from the fruit brand Jaffa and come in three new flavours. So instead of your regular green or red, you can get tropical, candy floss, and strawberry flavoured grapes.

Hey Willy Wonka called, he wants his shtick back. OK but seriously, what are these about?! Isn't the point of fruit to enjoy sugar in its natural state? As the names suggest, the grapes have a different and unusual flavour. But guys, seemingly it's all absolutely natural. Which gets a big "phew" from me.

Grapes with a candy floss flavour.

According to Pretty 52, the grapes are grown in Spain and despite the not-so-natural names, are completely born of mother nature. They get their distinct flavours via growing methods and combinations of different types of grapes.

Grapes that pack a whole lot of punch in the flavour department.

Costing only £2 for 200grams of the fruit treats, this is one healthy flavour blend that is entirely affordable.

Totally tropical flavoured grapes to excite and delight the senses.

Hmm I wonder what sort of delicious wine could be made with these grapes? Anybody else? No? OK, maybe that's just me. But new and exciting fruit types are nothing new you know. As a matter of fact they have been a bit of a headline grabber for some time now.

Take for example, the stoneless avocado. The Guardian reported back in 2017, that the fruit could potentially banish the risk of injuring one's self while cutting an avocado. The Spanish grown fruit is on the slimmer side compared to the traditional avocado pear and is the clever result of an un-pollinated blossom. Because it's not pollinated it develops without a seed. Charlotte Curtis, a food technology specialist at Marks And Spencer told The Guardian that the team at M&S had been eying these babies up for a while.

"We've had the mini, the giant, ready sliced and we're now launching the holy grail of avocados – stoneless. This amazing fruit has been on our radar for a couple of years and we're very excited to have finally been able to get hold of some for our customers to try."

Flavoured grapes might seem a bit weird and unusual to regular old fashioned fruit fans. But the thing is, new flavours like this might entice people less inclined to enjoy fruit to give it a try. AKA why the heck not? More fruit can never be a bad thing, right?