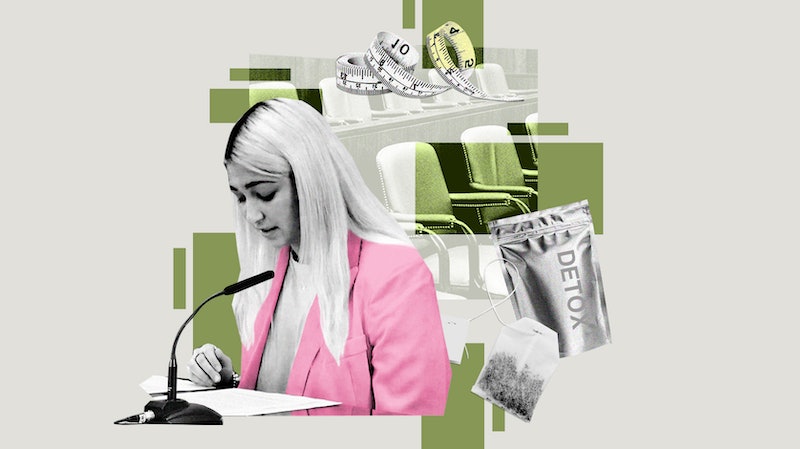 I never realized how little I interact with men in suits until I was testifying in front of a panel of them — their cuff links buffed, eyes peeled, an American flag in the background. Clearing my throat, I leaned toward the microphone.

“I expected to lose weight instantaneously. But what I actually experienced was a disgusting round of explosive diarrhea,” I read off my printed testimony. A New York City council member winced. Another wrinkled their nose.

I bought my first box of detox tea from the corner store by my parents’ apartment when I was a sophomore in high school. A friend had told me it was the secret to how dancers stay thin. I drank a cup before going to sleep and woke up to incessant diarrhea. Had I Googled the ingredients, I would have discovered this is a typical response to senna glycoside, the herbal ingredient in most stool softeners. I had essentially chugged liquid laxatives.

Despite that experience, I found the feeling of emptiness intoxicating. I continued to drink the teas every night, buying a new box whenever I ran out. It took two years and being diagnosed with two chronic digestive illnesses — one genetic, the other my gastroenterologist connected to the drinks — for me to open up to my friends, family, and doctors about what I’d been going through. It took another five to feel ready to tell the internet about how detox teas had enabled my eating disorder and destroyed my digestive system. But the most rewarding challenge has been turning my efforts toward political action.

In May 2019, Harvard Striped, an organization that works to find new approaches to eating disorder prevention, asked me to submit a written testimony in support of a Massachusetts bill that would ban the sale of non-FDA-approved dietary supplements, including detox products, to minors. Currently, you can buy these items at convenience stores, supermarkets, and pharmacies, and they’re often recommended by word of mouth through family and friends. And until Instagram announced that it was limiting diet product ads to minors, influencers and celebrities freely promoted these supplements on the app, further stoking teens’ curiosity. Lawmakers granted an extension on that bill until April 2020, meaning the legislation is still being deliberated.

Then, Harvard Striped asked if I’d be willing to testify for the New York City Council on behalf of a similar bill, this time in person. By that point, it had been a year since I started speaking openly about how the teas destroyed my digestive system. And even though I had less than a week to draft my statement, I felt confident. I approached my testimony the same way I would a story, filling the text with visceral personal anecdotes. I practiced it just once, for my partner.

But when I arrived at New York’s City Hall, I was taken aback by the building’s marble rotunda and framed portraits. I saw a camera crew in the corner of the committee room and felt my arm hairs rise at the thought of my testimony being broadcast. Looking down at my millennial pink power suit, I felt a pang of regret that I didn’t dress more conservatively. For the first time, it occurred to me that this might be a big deal.

Sitting in front of the American flag, wearing my pink suit and speaking in a quivering voice, I’d never felt so small.

When I walked in, Dr. Myla Harrison, M.D., assistant commissioner at the Bureau of Mental Health, was explaining why the department hasn’t passed a ban on detox teas. The reasoning? It hasn’t received any complaints about them. Do you expect minors who have no idea they have an eating disorder to file formal complaints during study hall?, I thought. The defense wrapped their questioning and left the room. I looked around to see if anyone would explain why they left before the witness testimonies began. No one did.

I wish they would have stayed to hear what followed. So many people said they’d been handed the products by a parent or friend. Like me, many had used diet products as a way to take up less space, to better blend in with their classmates. After the second or third panel, I found myself in tears, feeling like my trauma was being narrated back to me.

When it was my turn, I described growing up as the child of immigrants in a nearly all-white community, being bullied through middle school, and my desire to fit in with my peers. I grew hyperaware of the council members’ stares, the authority their body language conveyed as they heard my story. Sitting in front of the American flag, wearing my pink suit and speaking in a quivering voice, I’d never felt so small.

When I finished, Mark Levine, the council member who drafted the legislation, thanked me for sharing “something so personal.” Then, his colleagues began picking apart my statement. I hadn’t prepared for a round of questioning, so I did my best to answer them — describing how scrolling through Instagram can impact your body image, trying to remember the warning label on the first box of tea I purchased — with as much detail as possible, but I found myself starting to ramble. I knew every word I said would be public record and I wanted to get it right. But with the Health Department already out of the room, I wasn’t sure who I was aiming to convince.

I went to bed that night feeling let down by the system I’d trusted with my story. When I woke up, I was flooded by messages of support from the people who motivated me to speak out in the first place — teenagers, adults, even grandparents who had all struggled with detox teas. They reminded me I hadn’t testified on behalf of the council or to convince the defense — I was fighting for the survivors who couldn’t be in that room. Even if my testimony doesn’t help this bill get passed, I know I did everything I could to prevent other people from making a decision that could impact the rest of their lives. Sixteen-year-old Iman would have wanted it that way.